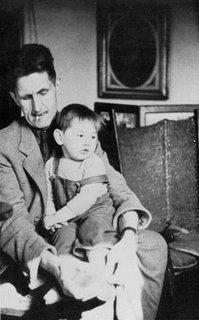 A SPECIMEN of Tribune’s correspondence:

TO THE JEW-PAID EDITOR, TRIBUNE, LONDON.
JEWS IN THE POLISH ARMY.
YOU ARE CONSTANTLY ATTACKING OUR GALLANT POLISH ALLY BECAUSE THEY KNOW HOW TO TREAT THE JEW PEST. THEY ALSO KNOW HOW TO TREAT ALL JEW-PAID EDITORS AND COMMUNIST PAPERS. WE KNOW YOU ARE IN THE PAY OF THE YIDS AND SOVIETS.
YOU ARE A FRIEND OF THE ENEMIES OF BRITAIN! THE DAY OF RECKONING IS AT HAND. BEWARE. ALL JEW PIGS WILL BE EXTERMINATED THE HITLER WAY—THE ONLY WAY TO GET RID OF THE YIDS.
PERISH JUDAH.

Typed on a Remington typewriter (postmark S.W.), and, what is to my mind an interesting detail, this is a carbon copy.

Anyone acquainted with the type will know that no assurance, no demonstration, no proof of the most solid kind would ever convince the writer of this that Tribune is not a Communist paper and not in the pay of the Soviet Government. One very curious characteristic of Fascists—I am speaking of amateur Fascists: I assume that the Gestapo are cleverer—is their failure to recognize that the parties of the Left are distinct from one another and by no means aiming at the same thing. It is always assumed that they are all one gang, whatever the outward appearances may be. In the first number of Mosley’s British Union Quarterly, which I have by me (incidentally, it contains an article by no less a person than Major Vidkun Quisling), I note that even Wyndham Lewis speaks of Stalin and Trotsky as though they were equivalent persons. Arnold Lunn, in his Spanish Rehearsal, actually seems to suggest that Trotsky started the Fourth International on Stalin’s instructions.

In just the same way, very few Communists, in my experience, will believe that the Trotskyists are not in the pay of Hitler. I have sometimes tried the experiment of pointing out that if the Trotskyists were in the pay of Hitler, or of anybody, they would occasionally have some money. But it is no use, it doesn’t register. So also with the belief in the machinations of the Jews, or the belief, widespread among Indian nationalists, that all Englishmen, of whatever political colour, are in secret conspiracy with one another. The belief in the Freemasons as a revolutionary organization is the strangest of all. In this country it would be just as reasonable to believe such a thing of the Buffaloes. Less than a generation ago, if not now, there were Catholic nuns who believed that at Masonic gatherings the Devil appeared in person, wearing full evening dress with a hole in the trousers for his tail to come through. In one form or another this kind of thing seems to attack nearly everybody, apparently answering to some obscure psychological need of our time.

Fighting Fascism in 1930s Britain
1958: Beating back Mosley in Notting Hill
The Battle of Lewisham, 1977

I live in Melbourne, Australia. I like anarchy. I don't like nazis. I enjoy eating pizza and drinking beer. I barrack for the greatest football team on Earth: Collingwood Magpies. The 2020 premiership's a cakewalk for the good old Collingwood.
View all posts by @ndy →
This entry was posted in !nataS, Anti-fascism, History, State / Politics and tagged George Orwell. Bookmark the permalink.