Menacingly rolling towards Ben Brown in my wheelchair… 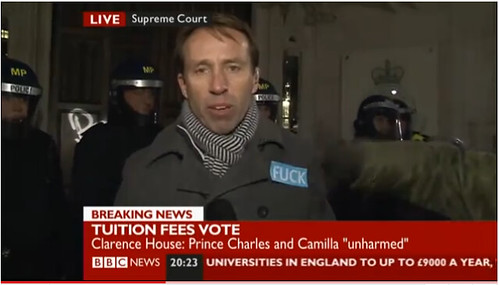 Watch Brown tear strips from McIntyre in this revealing interview, broadcast on December 13, 2010:

McIntyre’s a known troublemaker who was obviously looking for trouble, found it, and now has the cheek to complain about it. Given his obvious bad temper and expressed commitment to the violent overthrow of the state, I think that Brown handled the radical well, and ought to be congratulated for refusing to capitulate to the routine anti-police rhetoric which dominates media reportage on such matters. Besides, what, exactly, is McIntyre complaining about? The police have already announced an official investigation into the incident, one which in the fullness of time will declare a verdict; further, despite having ample opportunity to do so, he has evidently failed to himself file a complaint. Obviously, the police take the issue far more seriously than does this supposed ‘victim’!

Once again, congratulations to the BBC for refusing to be bullied into submission by a violent radical, and to the police for managing to control what must surely have been one of the most violent and frightening mobs seen on the streets of London for many years. 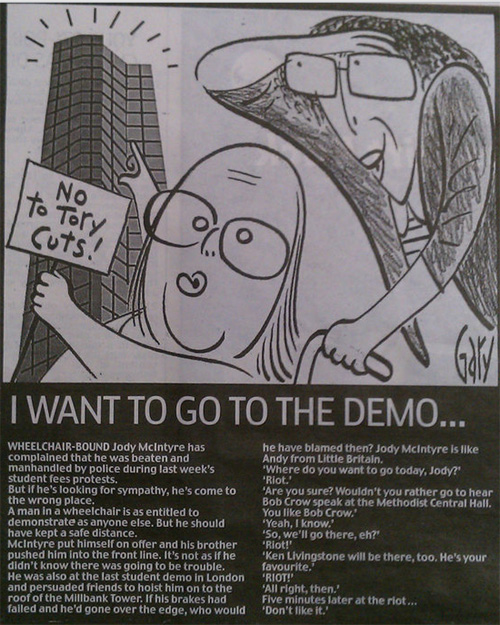 I live in Melbourne, Australia. I like anarchy. I don't like nazis. I enjoy eating pizza and drinking beer. I barrack for the greatest football team on Earth: Collingwood Magpies. The 2021 premiership's a cakewalk for the good old Collingwood.
View all posts by @ndy →
This entry was posted in !nataS, Broken Windows, Media, State / Politics, That's Capitalism!, War on Terror and tagged BBC, Ben Brown, Jody McIntyre. Bookmark the permalink.

7 Responses to Menacingly rolling towards Ben Brown in my wheelchair…