Every year thousands of young Australians pack their backpacks, book their EuRail passes and make for Europe, leaving their parents to worry and fret about their wellbeing and their ability to cope with foreign languages and customs.

God forbid anything should happen to them.

Two days after Christmas in 2007, Australian pathologist Simon Palfreeman got the call any parent would dread. His 21 year old – Jock – had been in a fight, another young man was dead and the Bulgarian criminal justice system had swallowed his son.

A year and a half on, with legal machinery groaning and Jock Palfreeman locked up on a murder charge in Sofia Central Prison, reporter Belinda Hawkins travels to Bulgaria with a father desperate to prove his son’s innocence but growing ever more doubtful about the ability of the Bulgarian system to deliver justice.

The dead man, 20 year old Andrei Monov, died from stab wounds on the way to hospital. Jock Palfreeman admits wielding the knife that killed him, but claims it was in self defence.

He says he tried to break up a gang attack on some gypsies [Romani] when the gang turned on him.

“I was constantly turning in a circle and every time one of them would come at me I would lunge at them with the knife in a swinging movement to scare them. All I remember is being hit on the head and falling down. The thing I remember is right, shit I am gone. This is it. I am finished.”

The prosecution disagrees with his version of events, disputes many of the defence statements, and is calling for a life sentence without parole.

Andrei Monov came from a prominent family and his death has become a cause celebre in Bulgaria. In the Bulgarian media, the Australian is portrayed as a heartless killer who was out for blood that night.

Hawkins was on hand inside Sofia prison for many candid moments between father and son and recorded an extended interview with Jock Palfreeman.

“I don’t know if I should have even gone there in the first place, now, but it’s too late for that now… but I mean these are the type of situations where if you don’t go and they kill these guys everyone then says well why did nobody go to help him?”

By way of further background regarding “nationalist” — that is, fascist — activism in Sofia:

3/3/2006- Several thousand Bulgarian nationalists have held a rally in Sofia demanding the resignation of the government. Parts of the city came to a standstill as supporters of the nationalist Ataka party marched through the streets chanting anti-government slogans. Ataka party leader Volen Siderov told the crowd that ethnic minorities such as Turks and Gypsies should not be allowed into the Bulgarian government…
© BBC News

At Andrei’s funeral: “About 250 mourners attended the two-hour funeral at the city’s Bojana cemetery. Monov was farewelled by relatives, schoolmates and fellow students from the New Bulgarian University where he had been studying. Dozens of members of Monov’s favourite soccer club FC Levski, one of the biggest in Bulgaria, also attended.”

Point being, FC Levski is home to the Levski Hools, a fascist football firm… 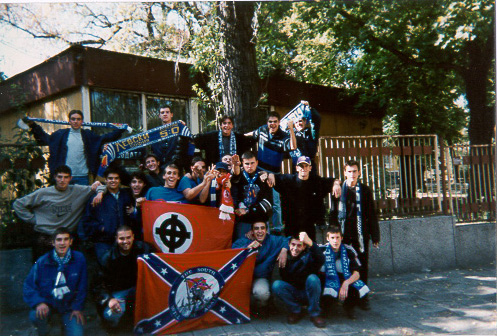 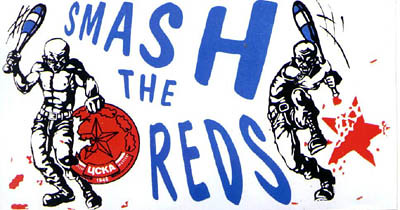 On the situation of Roma in Bulgaria, see : roma info centre. Roma comprise somewhere between 5 and 10% of the Bulgarian population of approximately 7.6 million people, constituting the country’s second largest minority and third largest ethnic group.

Recently, Organise has published a survey of emerging ultra-nationalist and fascist currents in Bulgaria, and reading it provides some further background to Jock’s case, as well as demonstrates, I think, that his account of previous harassment, and being witness to an apparent assault upon a Roma, is highly probable. See also this video, titled ‘Special treatment for bulgarian anarchist’, dated December 6, 2007, and apparently showing footage of a gang of Bulgarian fascists harassing an elderly Bulgarian anarchist:

In June 2007, boneheads attacked fans at the Tangra Mega rock concert, injuring several (among the headline acts on June 20, 2007 @ Universiada Hall, Sofia, Bulgaria was the English punk band The Exploited).

The example of Bulgaria is illustrative of the continuing problems in the peninsula. Bulgaria is a country of nearly eight million people, with a history of toleration of minorities and with a substantial Roma and ethnic Turk population. For years, even under the Ottoman rule that was endured for nearly five centuries, ethnic Bulgarians and ethnic Turks could live [as neighbours]. The program of the Bulgarian Central Revolutionary Committee, the 1870s organisation for the liberation of the country, forbade Bulgarians from attacking ordinary Turkish citizens in the struggle for independence. This stability continued into the 1980s until Todor Zhivkov, the infamous ruler for the majority of the People’s Republic’s life, started a campaign for “Bulgarisation” of the Turks in Bulgaria, forcing them to change their names, resulting in almost 300,000 leaving the country. The mid-to-late 1980s climate of terrorism by ethnic Turks, police actions against whole villages in their drive to “Bulgarise” them, and then the sudden collapse of the monolithic state threw things wide into the open. Rampant privatisation and ineffectual government in the nineties left a legacy of division that simply did not exist before. Many Roma families, left without the jobs provided for them under communism, fell into poverty and crime. The Movement for Rights and Freedoms (MRF) monopolised the Turkish vote and has been an element of every coalition government since its inception. Unemployment rose generally…

~ ‘Unfashionable Balkan nationalism? The rise of ultranationalist politics in Bulgaria’, Organise, No.70, Summer 2008

I live in Melbourne, Australia. I like anarchy. I don't like nazis. I enjoy eating pizza and drinking beer. I barrack for the greatest football team on Earth: Collingwood Magpies. The 2021 premiership's a cakewalk for the good old Collingwood.
View all posts by @ndy →
This entry was posted in Anti-fascism, Television and tagged Jock Palfreeman. Bookmark the permalink.