Presenting my social media research @ #BSidesSF 14Feb, its use for intelligence and exploitation is very real and shud concern all.

With more than a decade as an intelligence and special signals analyst in the U.S. Navy, Aaron Barr spent a significant amount of time learning how systems worked and discovering he had a knack for figuring things out. After he got out of the Navy in 2001, he entered the booming IT market. Knowing he wanted to focus more on IT security, Barr took a position at Northrop Grumman TASC, where he started out conducting vulnerability assessments and penetration tests, as well as teaching the early version of the company’s CyberWarrior course. After moving from Colorado to Washington, D.C., mostly for the career possibilities, Barr was offered a technical director position managing the technical strategy and execution for one of Northrop’s cybersecurity business units, which was “an opportunity I couldn’t pass up,” he told TNNI. After a year, he decided to try something he had always been curious about and transitioned into the small-business side and currently serves as CEO of HBGary Federal…

Or did. Sadly, HBGary Federal’s site is unwell at the moment, so I dunno if Aaron is still serving the corporation (perhaps from under his desk).

As an enormous number of “websites” on the ah, “Internets” are busily documenting, late last year Aaron–in an apparent bid to drum up publicity for HBGary Federal–had a bRanestorm: target Anonymous, and expose its key players–Moe, Larry, and Curly‎–to public (or at least corporate) scrutiny. Why Anonymous? Partly on account of the fact that Anonymous had rallied to Wikileaks in its many battles with The Forces of Evil, and a demonstrated ability to detail the lives and loves of Tom, Dick and Harry would send a clear message to potential clients–especially union-busting law firms such as Hunton & Williams–that HBGary Federal was the shizz. “Roll your sleeves up and get your hands dirty. In this field, you learn most by doing, even by tinkering.”

Unlike Aaron’s decision to move to Washington and link arms with Northrop Grumman TASC–a subsidiary of one of the world’s largest killing machines–targeting Anonymous in this way was not the bestest career move. 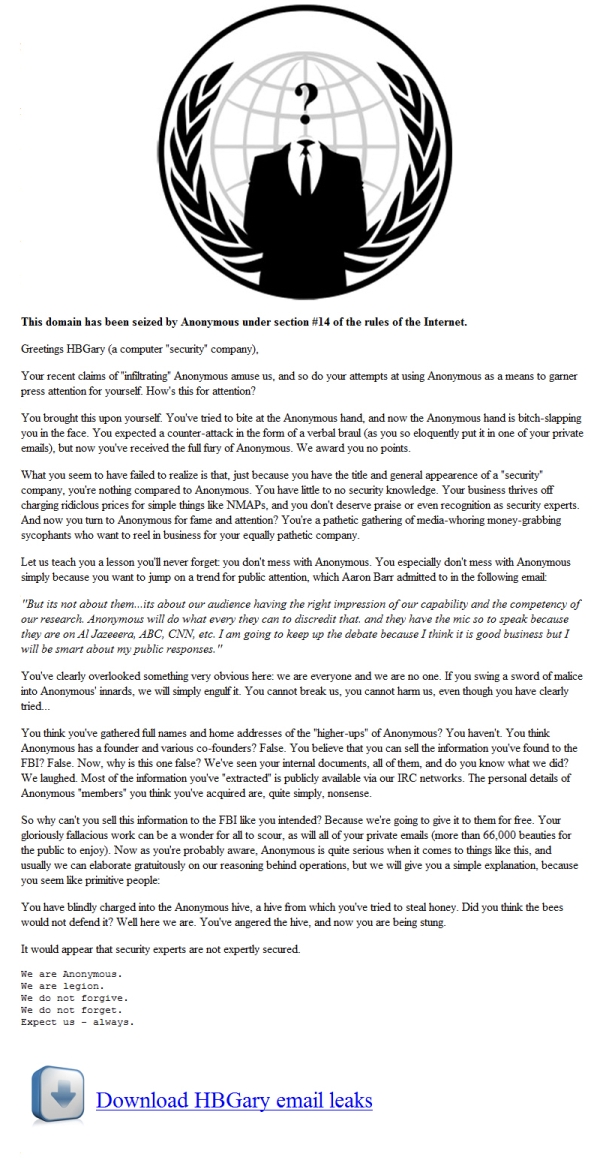 I live in Melbourne, Australia. I like anarchy. I don't like nazis. I enjoy eating pizza and drinking beer. I barrack for the greatest football team on Earth: Collingwood Magpies. The 2023 premiership's a cakewalk for the good old Collingwood.
View all posts by @ndy →
This entry was posted in !nataS, Broken Windows, Media, State / Politics, That's Capitalism!, War on Terror and tagged Aaron Barr, Anonymous. Bookmark the permalink.