Trawling the web, I discovered that a bloke called Steve Tilzey has gotten up the noses of some mob calling themselves ‘Aryan Unity’. It seems that these “Aryans” are rather unhappy at the popularity of FC United of Manchester…

Well, either that, or they’re hopping mad at the un-popularity of their own idiotic brand of fascist stupidity; so mad that they’re lashing out at all and sundry, but especially those folks who like community football…

Or perhaps the reason this small band of divided descendants of Persia got so upset at Tilzey has something to do with the fact that he wrote a book with a mate, Dave Hann, called it No Retreat, and sub-titled it as being an account of “The Secret War Between Britain’s Anti-Fascists and the Far-Right”.

Unhappy memories, perhaps? Could it be that one of these “Aryans” had the misfortune to attend the Blood & Honour rendezvous in Hyde Park on May 27th, 1989? 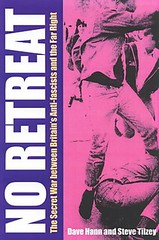 Whatever the case, as I’ve been unable to obtain a copy of the book, I can’t really comment on its contents, but the following may give you some idea of what the fuss is all about: ‘Street Fighting Men’ : “Ben Granger talks to Dave Hann and Steve Tilzey, authors of No Retreat, a punchy account of their days fighting neo-Nazis in the North-West of England.” A favourable review of the book is also made available by Irish antifa here.

I live in Melbourne, Australia. I like anarchy. I don't like nazis. I enjoy eating pizza and drinking beer. I barrack for the greatest football team on Earth: Collingwood Magpies. The 2023 premiership's a cakewalk for the good old Collingwood.
View all posts by @ndy →
This entry was posted in Anti-fascism, History. Bookmark the permalink.

6 Responses to No Retreat