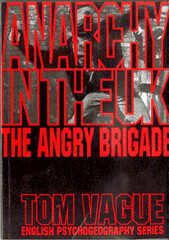 In his new novel, Johnny Come Home, Arnott trades brass knuckles for bell-bottoms as he depicts glam-rock London in 1972.

Set in a squat, the story revolves around anarchist O’Connell, who commits suicide; Pearson, his artist boyfriend, left behind; Nina, his activist squat housemate; and Sweet Thing (named after a Bowie song), a pretty rent boy who comes to live with them.

Once again the politics of the era loom large. Arnott depicts an era of stacked boots and glitter balls punctuated by protests and acts of terrorism (in 1971 anti-capitalists the Angry Brigade bombed London’s Biba boutique).

“The whole radical politics of that time interests me,” he says. “There was a very radical agenda, but like glam rock, it kind of flared up and then disappeared.”

Well yes, Biba’s boutique was blown up. On May Day, no less. Hell, they even wrote a communiqué to commemorate the occasion:

IF YOU’RE NOT BUSY BEING BORN, YOU’RE BUSY BUYING.

All the sales girls in the flash boutiques are made to dress the same and have the same make-up, representing the 1940s. In fashion as in everything else, capitalism can only go backwards — they’ve nowhere to go — they’re dead.

The future is ours. Life is so boring there is nothing to do except spend all our wages on the latest skirt or shirt.

Brothers and Sisters, what are your real desires? Sit in the drugstore, look distant, empty, bored, drinking some tasteless coffee? Or perhaps BLOW IT UP or BURN IT DOWN. The only thing you can do with modern slave-houses — called boutiques — is WRECK THEM. You can’t reform profit capitalism and inhumanity. Just KICK IT TILL IT BREAKS.

According to Biba, the “real desires” of the “Brothers and Sisters” revolve around wardrobes, cosmetics, soft furnishings, washing powder and food — for both themselves and their pets — “all presented in the distinctive Biba packaging”. Well, that’s what some reckon:

Biba remains the most evocative name in post-War British fashion.

Born as a small boutique in 1964 just as London started to swing, its upward mobility followed a path diametrically opposed to that of the society around it…

Drawing on Art Deco, Nouveau, Victoriana and the golden age of Hollywood, it was more than just fashion: it was a whole world, a lifestyle choice. At the height of the store’s glory, the committed shopper could buy not only a new wardrobe, fully co-ordinated from head to toe, but also a complete range of cosmetics and soft furnishings, together with the washing powder to care for her clothes, and food for both herself and her pets, all presented in the distinctive Biba packaging. Alternatively she could just hang out, either lounging in the shop-windows (Biba didn’t do window-displays), or sipping cocktails upstairs amongst the flamingos that lived in the Roof Garden, or in the Rainbow Room, where on a good night there might be a live performance by the likes of the New York Dolls, Liberace or the Manhattan Transfer.

It was not so much a department store as a theme park devoted to elegantly wasted decadence.

Brigitte Bardot, Raquel Welch and Princess Anne may have shopped there; Mick and Marianne, Sonny and Cher, David and Angie may have been regular visitors; but the store was never the exclusive preserve of the rich and famous: prices were kept deliberately low, and anyone who could tolerate the disdainful inefficiency of the staff was encouraged to soak up the glamour of an unforgettable shopping experience.

And then it crashed and burned. 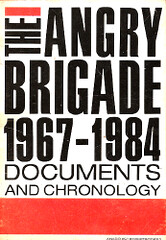 Ha! The whirligig of time does bring in his revenges!

Of course, despite the prevalence of any number of exciting fashions — even lifestyles — some people are still angry. Angry enough to pour some type of dirt into gas tanks, to set fires, and even to write letters and to send emails!

A letter sent anonymously and widely to media outlets on Monday read in part: “There is no excuse for suburbs. Development must stop.” It noted that equipment at a Victoria Road South site was vandalized on the weekend of June 25, by unknown individuals who poured some type of dirt into the gas tanks. It was signed: The Anarchist Fire Brigade. This whole situation is not unfamiliar, but should still cause concern. In a separate incident, the Mercury and other media organizations received an e-mail last week allegedly from the Earth Liberation Front, claiming responsibility for a fire that destroyed a home under construction in the city’s east end, causing $200,000 in damage. In addition, previous letters from the [ELF] and Anarchist Solidarity have claimed responsibility for a fire at a new home on Dawn Avenue and the vandalism of equipment at the Memorial Gardens demolition site, respectively.

Quick, somebody call an expert!

The [ELF], by its very nature, has no structure, according to an expert interviewed by the Mercury last week. John Thompson of the Mackenzie Institute, a body which studies organized violence [sic], noted after last week’s house fire that “It’s a methodology and a habit rather than an organization.” He speculated the crimes could be the work of a single person or a group of up to six people. When police do track down who is responsible, whether for one incident or all, there should be serious consideration to charge those responsible under organized crime or terrorism legislation. It appears these activities are planned, and new development is the target.

When in reality, New Development is our New God, before which the “Brothers and Sisters” must prostrate themselves… or not, as the case may be.

I live in Melbourne, Australia. I like anarchy. I don't like nazis. I enjoy eating pizza and drinking beer. I barrack for the greatest football team on Earth: Collingwood Magpies. The 2021 premiership's a cakewalk for the good old Collingwood.
View all posts by @ndy →
This entry was posted in Anarchism, History, Media, State / Politics, War on Terror. Bookmark the permalink.