William A. White said he’s concerned about the NSM’s possible link to a Satanist group.

Roanoke landlord and neo-Nazi sympathizer [?] William A. White has resigned from the National Socialist Movement, an organization that idolizes Adolf Hitler but is reportedly in turmoil over being associated with Satan.

White said Monday he stepped down as spokesman for the group and leader of its Roanoke unit over the weekend following revelations that some NSM members are involved with a group called the Joy of Satan.

According to White and others, the Satanic group engages in inappropriate sexual discussions with children through its Teens for Satan e-mail group. 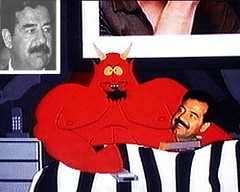 Until recently considered the country’s fastest-growing white supremacy group, the NSM is in the midst of an upheaval that could change that, said Mark Potok of the Southern Poverty Law Center, which monitors hate groups.

An unknown number of members have left the NSM over the controversy, and some entire statewide chapters, including the one in Washington, have bolted from the Minneapolis-based organization, Potok said.

“I think there’s something fairly seismic going on with the National Socialist Movement,” he said.

But according to NSM commander Jeff Schoep, the scandal consists only of rumors spread by White on the Internet. Schoep said White was expelled from the group Friday for “attacking Christianity and various religions.” He also said White has a credibility problem.

The NSM official accused by White has denied any ties to Satanism, Schoep said. But if there was such a link, particularly one that involved improper contact with children, the movement would take the appropriate actions, he said.

“We certainly can’t have that. We’re a political party and a legal entity in the United States.”

In his year or so with the group, White “put the National Socialist Movement on the map,” largely through his role as spokesman during a march in Toledo, Ohio, that resulted in a riot that drew national attention, Potok said.

White, who owns more than a dozen rental homes in Roanoke’s West End neighborhood, has also generated controversy for his actions as a landlord and the editor of somebodybringmeabucket-quick.com, a Web site that often airs racist views. The Roanoke NAACP has accused White of discriminating against minority tenants, a charge he denies.

White has declined to say how many members belong to the local NSM unit he headed.

In a recent post on his Web site, White said he has set up an e-mail group for “all white activists” who might be interested in forming a new national socialist movement. But it’s too soon to say whether such an organization might be headquartered in Roanoke.

“That is so far into the future that I can’t comment on that at all,” White said.

NB. Carl D. Thompson is a disgraced former editor, and currently only member (and possibly even leader) of the NSM Down Under. More on him later… maybe. (I’m actually unsure if he’s serious or just has an unfortunate fetish for brooding men dressed in black leather.)

As for Bill, he’s been known to be a complete and utter dickhead for well over 10 years; that is, since 1996, when he launched his first bizarre attempt at self-promotion called the ‘Utopian Anarchist Party'(!).