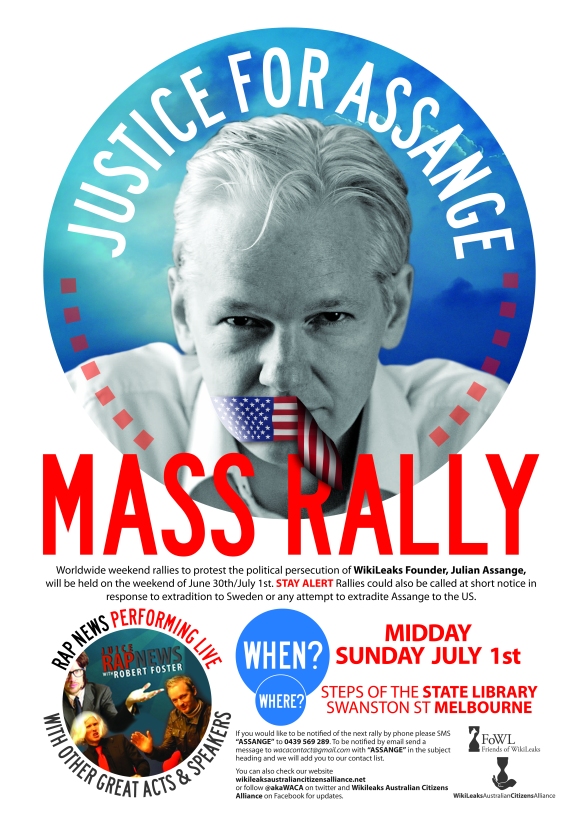 There’s a rally in support of Julian Assange this weekend.

Following his fail in the UK courts, Assange is currently attempting to start a new life as a llama farmer but who knows if he’ll be able to. In any case, a glittering array of local talent will be on hand to entertain and inform the masses, including the bRanes behind Rap News, what Cam and I got to pick on radio some months ago.

Funnily enough, the hip-hop journalists got funny man Noam Chomsky on the show during his last and final visit to Straya; his recent endorsement of an open letter generated some minor controversy in the Twitterverse.

Well, my tiny corner of it anyway.

In any event, the letter — signed by “leftist hero” Chomsky (and a few hundred other less heroic celebrities) apparently implies that rape is not a serious crime.

To be honest, I found the Twitter conversation I had about the letter and its meaning a bit confusing.

I live in Melbourne, Australia. I like anarchy. I don't like nazis. I enjoy eating pizza and drinking beer. I barrack for the greatest football team on Earth: Collingwood Magpies. The 2021 premiership's a cakewalk for the good old Collingwood.
View all posts by @ndy →
This entry was posted in !nataS, Media, Sex & Sexuality, State / Politics, That's Capitalism!, War on Terror and tagged Julian Assange, Wikileaks. Bookmark the permalink.