The (Australian) Anarchists on Chinese Labor (1887) 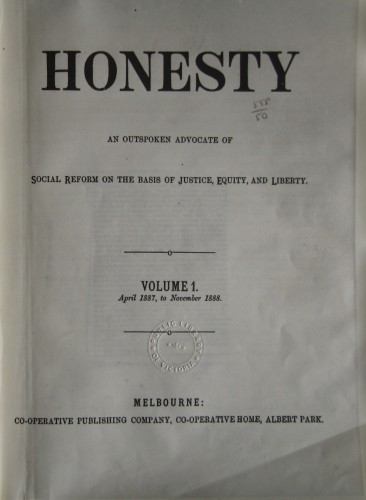 [Honesty was published from April 1887 to November 1888. It was the first anarchist newspaper in Australia, produced by the Melbourne Anarchist Club. Contributors included David Andrade, his brother Will (later well known as a radical bookseller), J.A. Andrews and Chummy Fleming. Source : Reason in Revolt.]

The visit of the Chinese commissioners to Australia [May–September 1887] has afforded a fresh opportunity for the labor agitators to raise the old familiar anti-Chinese cry. Again do we hear the outcry against their vicious habits — their smoking of the opium which we thrust upon them, their simple mode of living, and their industrial success. It is time that the laborers looked this matter squarely in the face, and took a rational view of the matter.

The Chinese have been persecuted long enough. Not only have they had poll-taxes imposed upon them, and other legislative obstacles thrown in the way of their immigration to these shores; but a constant effort is being made to drive them from their employment, if not from the colonies altogether. Meetings are constantly being held in Queensland protesting against the employment of them; Victorian trades’ unions are forever trying to devise means to drive away “the yellow agony;” and everywhere are evidences of determined hostility towards them. It is feared that they are superseding the European races, and the descendants of “the noble Britons” are recoiling in horror at their number, although, as a matter of fact, there are not fifty thousand Chinese in the whole of Australasia, as against two million eight hundred thousand Europeans, — sixty-five of us to every Chinaman. Think of it: sixty-five white men afraid to compete with one yellow skin! They are actually alarmed at the fact that the Chinese are setting up as gardeners, carpenters, miners, hawkers, storekeepers, cooks, laborers, and probably will soon be doing our washing and laundry work. What matters it to the laborer that his Chinese neighbor is also a laborer? — were he an idler instead, there would be some grounds for complaint. The Chinese are admitted to be industrious and persevering, and yet condemned for this very perseverance. If they excel as cabinet-makers, owing to their cheap production, it is clearly of advantage to us who buy their articles. If they sell at low prices, it is at their own loss, and to the advantage of our poorly remunerated laborers, who can only buy cheap articles, or none. If they transport their money — a valueless thing in itself — to China, we are again the gainers, for they have consumed the less of our produce. If they work so diligently, and such long hours, to produce so much, it is to the advantage of ourselves who thus have more to consume. If they are economical — if they live so simply, and fare so poorly, we suffer nothing by their lack of consumption. And yet the European laborer is fighting poor “John”, because he produces too much and consumes too little!

If the Chinese being employed is the cause of a European starving, it is clearly not the Chinaman, who produces much and consumes little, who is to blame. We must seek further. We must seek out the exploiter who produces nothing and consumes much. The fact is that statute law has monopolised the wealth of nature in the hands of a few idlers; and the workers — Chinese and European — are cutting each other’s throats for the crumbs from the rich man’s table, when they might more advantageously cease piling the fruits of their labor upon that table. The Chinese, like ourselves, are the victims of monopoly and exploitation. Were every Chinaman banished from Australasia tomorrow, the evils would still exist as bad as ever. Instead of the Chinese being the scapegoats of economical blundering as they are now, their places would be filled by European scapegoats. While monopoly is supported some must go to the wall, the weakest must decline, a huge number of the workers must be sacrificed upon the altar of Usury.

Stump orators and professional labor agitators propose that the “difficulty” be met by compelling the Chinese to adopt our manners and customs. Could absurdity go much further? Does any intelligent laborer imagine for a moment that the labor troubles will even be minimised by compelling the Chinese to eat flesh and wear European clothing (when the other workers have already not enough), to cut off their pigtails (which harm no one), and to practice the “civilized” customs of tobacco-smoking, beer-drinking, alcoholic intoxication, wanton luxury and indolence? We must seek other “remedies” than these.

The Chinese labor question must be settled by reversing the aims of the trades-unionists, who seek high wages and high prices,–two principles which destroy each other. We must aim at high wages and low prices, or in other words, the Cost Principle. When the workers combine together to exchange equivalent for equivalent, boycotting all capitalists, usurers, and profit-makers generally, we shall hear no more of the Chinese labor question, which is one of the most hollow delusions by which the monopolists hold the laborers in subjection.

I live in Melbourne, Australia. I like anarchy. I don't like nazis. I enjoy eating pizza and drinking beer. I barrack for the greatest football team on Earth: Collingwood Magpies. The 2023 premiership's a cakewalk for the good old Collingwood.
View all posts by @ndy →
This entry was posted in Anarchism, History, Media and tagged Chinese Labor, Honesty, Melbourne Anarchist Club. Bookmark the permalink.