blah blah blah — so a blogger in the us has argued, rather poorly, that lorde’s song ‘royals’ is “deeply racist”. i can find very few, if any, who agree with her, but whatever. she concludes her post on the following rather ungenerous note:– “let’s just hope [lorde’s] feminism gets a lot less racist as she develops as an artist”.

anyway, the CONTROVERSIAL! article by verónica bayetti flores was posted on the feministing site on october 3 but it was scooped by another post by a philosophy teacher named robin james from north carolina, posted on september 18. the september post has received nowhere near the attention the october post done. both condemn lorde for being a racist: in flores’ words, ‘shitting on black folks and rappers’; in james’ case ‘articulating a specific kind of anti-black racism in a way that clearly illustrates the role of white femininity in multi-racial white supremacist patriarchy’ (the professor’s post contains some incredible riffing). why racist? mostly ’cause lorde made the mistake of referring to “gold teeth, Cristal and Maybachs” in her lyrics … and we all know what that means right? *nudge nudge, wink wink*

finally, no big deal, but i thought it was curious that the feministing post makes no ref to the previous, though both writers think the alleged racism in the song is wow … 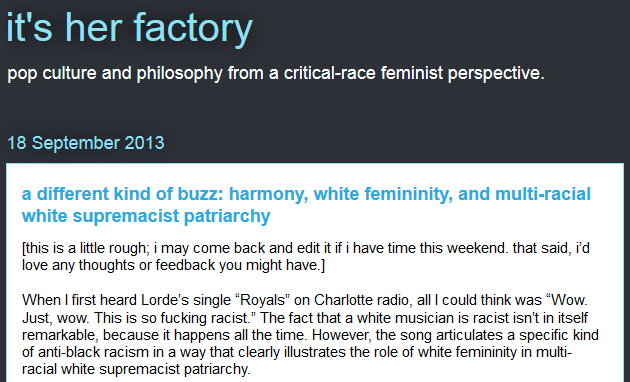 I live in Melbourne, Australia. I like anarchy. I don't like nazis. I enjoy eating pizza and drinking beer. I barrack for the greatest football team on Earth: Collingwood Magpies. The 2020 premiership's a cakewalk for the good old Collingwood.
View all posts by @ndy →
This entry was posted in !nataS, Art, Music, Sex & Sexuality, State / Politics, That's Capitalism! and tagged Lorde. Bookmark the permalink.