…or, in recent months, a handful of boneheads in Perth and Melbourne have been slapping up stickers promoting B&H/C18 LOL. (See also : Volksfront Australia : Back With A Bang!, October 10, 2013.) Thus today I received a photo of some stickers stuck outside Ascot Vale train station (Ascot Vale is an inner northern suburb of Melbourne): 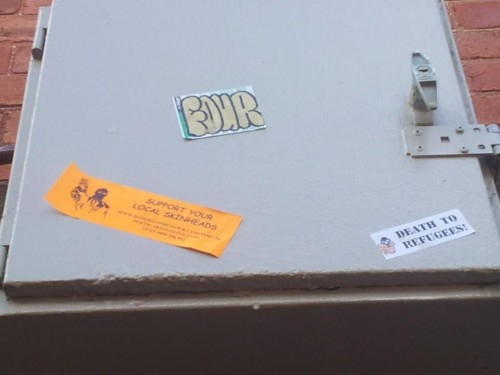 The orange sticker is the same sticker that appeared in Perth six months ago: 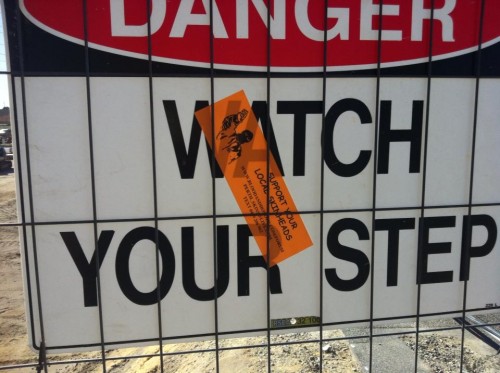 Currently, five men have been charged with criminal damage for distroing the stickers in Perth: 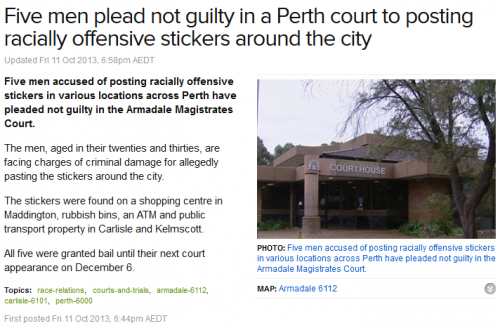 The last time B&H/C18 made it into the news in Australia was a few years ago when Perth bonehead Bradley Trappitt (below, far right) was convicted along with two other boneheads of being naughty boys and playing with guns in the vicinity of a mosque. Trappitt has since come under the wing of Sydney-based Welf Herfurth, the leader of a small group of fascist activists variously parading under the banner of the New Right/’national anarchism’. The last of this mob’s excitingly irregular public performances was at a November 2012 rally against an Israeli attack on Gaza. (Note that, in a related case, a former WA police officer named Robert Critchley was acquitted late last year of the charge that he had provided the boneheads with information regarding police investigations into bonehead activity in Perth.)

The B&H site which the stickers promote is an entity (B&H/C18) distinct from the B&H associated with a bonehead gang called the (Southern Cross) Hammerskins. In Australia (if not, say, in Russia), the Hammerskin-aligned B&H is a much more popular and well-established neo-Nazi organising tool, having operated successfully for 20 years in the country and holding regular gigs in Melbourne and a number of other cities including Adelaide, Sydney and most recently on the Gold Coast. The split between the two wings dates back to the years immediately following the death of the founder of B&H, Ian Stuart Donaldson, with the wing aligned to Combat-18 (where 1 = A, 8 = H and AH = Adolf Hitler) more openly committed to political violence against its opponents. (For more infos, see : Blood and Honour vs. Blood and Honour, April 12, 2009.)

On a slightly concerning note, in December last year Ascot Vale was the site of a particularly nasty assault upon a young Vietnamese student.

Minh Duong was walking home from his job in Ascot Vale in June when he was set upon by Shannon Hudson, 21 and Wayne O’Brien, 20, both of Ascot Vale.

Mr Duong was kicked and punched repeatedly before being stabbed and having a brick dropped on his head.

The boys responsible for the assault fancied themselves Little Hitlers, and are part of a small, very loose network of nazi yoof in the northern suburbs of Melbourne — tho’ the precise connections between the various elements that comprise the milieu are rarely, if ever, made public knowledge.

I live in Melbourne, Australia. I like anarchy. I don't like nazis. I enjoy eating pizza and drinking beer. I barrack for the greatest football team on Earth: Collingwood Magpies. The 2021 premiership's a cakewalk for the good old Collingwood.
View all posts by @ndy →
This entry was posted in Anti-fascism, Media and tagged Blood & Honour, Blood and Honour, Combat 18, Combat 18 Australia. Bookmark the permalink.