I beg Odin to watch over you with his loving eye / If my life must end for you and my race then I will … give it / Your smile melts the most Iron heart, your holy body wrapped in the red, white and black of the Swastika flag… 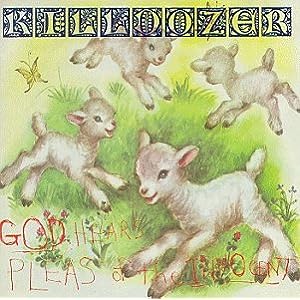 Bradley Neil Trappitt and three friends, allegedly members of the local franchise of neo-Nazi network Combat 18, were apparently drunk on February 4, 2010, and so decided it would be both ace and grouse to fire three shots at the dome roof of the Suleymaniye Mosque in Queens Park in Perth. Trappitt was fined more than $9000 for his involvement in the shooting (co-accused, Jacob Marshall Holt, 24, previously pleaded guilty on similar charges and was given a seven-month jail sentence suspended for 12 months).

Trappitt was charged with wilfully damaging property, possessing an unlicensed firearm and unlawfully discharging a firearm from across the road.

Magistrate Steven Heath said the fine needed to be a “substantial one to reflect the seriousness” of the crime.

He said Trappitt’s involvement could be distinguished from his co-accused as a “lesser role” and accepted that he co-operated when he was questioned.

But he said it was still a “foolish decision” to participate in the crime.

Trappitt’s lawyer Curt Hofmann said his client drove the car to the mosque but never got out of the vehicle.

He said Trappitt was trying to show “bravado” among his friends and was acting out of “stupidity”.

Bradley is innocent until proven now considered guilty, obviously; curiously, he’s also friends with Welf Herfurth, the (former) ‘leader’ of the dwindling ranks of ‘national anarchists’ in Australia. (Herfurth now appears to prefer to spend his time organising grown-ups in the local franchise of the neo-Nazi Volksfront network in Sydney.) Along with Herfurth and a range of other fascist creeps, Trappitt is BFF with the Sydney-based Creatard Chris Smith.

Despite this, “Trappitt’s lawyer Curt Hofmann had earlier told the court the shooting wasn’t racially motivated but just a stupid stunt by four friends who wanted to show off after they had been drinking.”

‘Combat 18’ originated in the UK in the late 1980s as a militant, anti-anti-fascist network dedicated to causing terror among neo-Nazism’s political opponents — “left-wing bookshops, gay pubs and anti-apartheid activists” — and to defending the organising activity of its parent networks ‘Blood & Honour’ and the BNP. Those involved also referred to Combat 18 as ‘Terror Machine’, and took great delight in the fear and loathing its activity was intended to generate. Like many other stories on the fringes of the far right, however, it ended in tears: former leader Paul ‘Charlie’ Sargent one of two Aryan Supermen convicted of murdering kameraden Christopher Castle (by sticking a knife 20cm into his back) in 1997.

Since then, C18 — which, while also gathering a reputation as a state-sponsored honeypot, cultivated links with Loyalist paramilitaries in Northern Ireland/The Six Counties — grew and expanded overseas. Currently, C18 appears to eke out a sporadically violent existence nestled among broader fascist networks in Europe, especially Eastern Europe, while also remaining closely tied to one of two splinters in the neo-Nazi network ‘Blood & Honour’. In Australia and New Zealand, B&H is aligned with non-C18 elements, and in particular the local franchises of the US-based Hammerskins network. Their principal bonehead rival is another local franchise of yet another US-based group called Volksfront. In the US (and elsewhere) the rivalry between the two groups can be quite intense, even bloody, but locally it’s all sunshine and lollipops, and the two, otherwise antagonistic groups have learned to play nicely with one another.

Or at least, nobody has stabbed anyone in the back.

Like seemingly ever other Jew-hatin’ Australian, Trappitt (‘Aussie_Knight’) posted on the White supremacist website Stormfront (joining in November 2004), contributing some very moving poetry [stormfront.org/forum/t206672/] while also taking the opportunity to riff on some neglected aspects of modern German history: “You want to know who started the War… THE JEWS[!]” [stormfront.org/forum/t162628-6/#post1470826].

The Boys from Brazil Australia maintained a website — terrormachine.net — taken over from the Norwegian C18. It’s closed now, and the archive wiped, but it used to advertise neo-Nazi merch and contain occasional announcements regarding the group’s infrequent activities. If I was a defence lawyer, I might characterise it as not racially motivated but just a stupid site by four friends who wanted to show off after they’d been drinking. In any case, the site was registered to a bloke called Jake. From Perth. Several years ago he, along with Stormfront moderator Paul Innes (‘Steelcap Boot’), helped spread David Lane’s ashes around town: David Lane being, of course, the dead neo-Nazi terrorist from the US who coined the ’14 words’.

As for The Weerheym Manoeuvre…

Six years ago, another small group of neo-Nazis found themselves on trial in Perth for similarly foolish and stupid behaviour / boys will be boys / ‘nigger’ and ‘sand-nigger terrorist’ are simply everyday discourse / Nine sisters twelve cousins and I’m fucking the lot / yadda yadda yadda.

Before he was sentenced to a six-month suspended sentence this week, Weerheym’s lawyer, Michael Tudori, told the Perth Magistrates Court Weerheym was not interested in the ANM and had not wanted to take part in the graffiti…

Weerheym was not jailed because he was deemed to have played a much lesser role as the driver.

The next two major fascist assemblies are the Sydney Forum over the weekend of September 18/19 (at which the Canadian neo-Nazi and Holocaust denialist Paul Fromm is expected to speak) and the following weekend in Melbourne, when Justin O’Brien of Blood & Honour Australia (and Hold Fast Body Art) will be helping to organise the 17th (?) annual Ian Stuart Donaldson memorial gig. 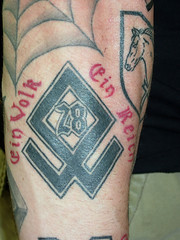