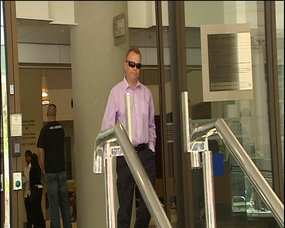 In the UK, several police officers belonging to the National Public Order Intelligence Unit have recently been exposed after infiltrating environmental protest movements. In Australia:

A former police officer who worked in the phone intercept unit has been charged after he allegedly attempted to warn a man that he was under surveillance as part of a secret investigation into the Perth branch of international neo-nazi outfit Combat 18.

Robert David Critchley, 42, appeared in Perth Magistrate’s Court yesterday charged with attempting to pervert the course of justice and unlawful use of a police computer.

Police alleged he tied to tell Jacob Marshall Hort that his mobile phone was being monitored.

Hort, of High Wycombe, is reportedly part of the Perth branch of race-hate group Combat 18, which is known for being behind the bombings of Asian communities in London in the 1990s [?].

Hort was convicted in July of criminal damage and discharging a firearm over an incident in which several shots were fired at the Queens Park Suleymaniye Mosque, causing $15,000 damage.

Mr Critchley, of Ocean Reef, was attached to the State intelligence division in January last year when it is alleged he made attempts to tell Hort he was the target of a police investigation into Combat 18’s activities.

It is also alleged that between May 2009 and January 2010 he accessed details of a person through a police computer when he was not permitted to do so.

The two charges are unrelated.

Mr Critchley resigned from the police service in September after Police Minister Rob Johnson approved a recommendation from Police Commissioner Karl O’Callaghan that he be removed.

He was not required to plead yesterday and has been released on bail to appear in court in April.

Mr Critchley broke into a sprint to avoid waiting media when he left the court.

Combat 18 was formed in Britain in 1991 [?] and has links to the far-right British Nationalist Party [?]. It is not known when the group started in Perth but it is believed police began monitoring members’ activities in late 2009.

Combat 18 in Perf done a website, terrormachine.net, which they took over from the Norwegian franchise in February 2009. (The site was regoed to Hort using a pseudo.) Despite sharing–along with Perf plasterer and former Stormfront moderator Paul Innes–in the indescribable joys of spreading some of the ashes of US nutzi terrorist David Lane in 2009, things started to go badly for Jacob & Co. when the gig organised for April of that year (by former Skrewdriver bassist-turned-fridge-repair-guy Murray Holmes) was sabotaged and Hort’s band, ‘Indigenous Hate’, got thrown off the bill “for being lying scum”. Relations between Combat 18 and fellow nutzis in Blood & Honour (Australia)/(Southern Cross) Hammerskins have been rocky at the best of times, but since the abortive gig, and the developing bond between (the remnants of) Combat 18 and (the Australian franchise of) another (US-based) bonehead gang called Volksfront, things have gotten even more poisonous. 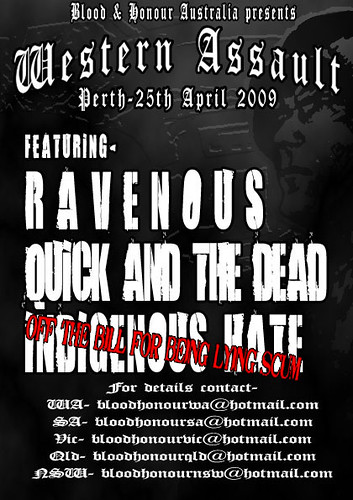 Police in Perf have reason to be especially sensitive to neo-Nazi organising in that part of the world as the last time a groupuscule got going it caused quite a bit of trouble. In the 1980s, the ‘Australian Nationalists Movement’ under ‘Java’ Jack van Tongeren tried to kick-start a race war by blowing shit up and setting buildings on fire. Things didn’t quite go according to The Master Race’s plan however, as an alleged police informant was murdered, and the gang’s leadership was sent to jail.

Upon his release a few years ago, Jack tried, with the help of some rooly patriotik yoof, to embark upon a Senatorial campaign. The yoof in this instance rallied to the cause by re-decorating synagogues and old people’s homes and threatening to kill and otherwise injure their political opponents. Again, the story ended badly. Jumping Jack, along with several members of the ‘White Devils’ gang went (back) to jail, and ZOG finally done introduced racial vilification legislation.

This law is currently being used to prosecute a local anti-Semite named Brendon O’Connell. If successful, it will be the first time a person has been convicted under the relevant Act.

Courtesy of nutzi bloggers Jim Perren and Peter Campbell, word on the virtual street is that the latest pea-brain(s) to have a crack at neo-Nazi organising are clustered around UWA student Nicholas Cole, a young middle class boy also known to be BFF with members of Combat 18.

Upon discovering that Hort had jumped into bed with Combat 18, in March 2009, B&H Australia released the following statement:

Blood & Honour Australia would like to inform all comrades that the band “Indigenous Hate” from Perth, Australia have come out of the closet as Combat 18 supporters/activists. Despite almost two years of sustained support and brotherhood from us, the main member of the band, Jake, has been colluding with the main C18 figure in Australia behind our backs and on March 7 played a C18 gig in Sydney. In typical deceitful and dishonourable C18 fashion, he tried to hide this from us by playing under the assumed name “Runes Of War”.

Seemingly coincidentally, a new C18 Australia website emerged recently and on further investigation it transpires that the site is actually owned by this fool. C18 itself is trying to reinvent themselves as “Club Nation” so we would like to inform everyone who is contacted by them that it is a C18 front.

Given their track record, we’re at a loss as to why anyone would want to associate themselves with the outcasts and imbeciles of that organization, especially as we spent considerable effort educating this guy on the issues. However, the fact remains that through his treachery this idiot has not only harmed B&H Australia (financially and otherwise), but has also betrayed Blood and Honour Worldwide by doing a feature on his band in the latest (Issue 41) Blood & Honour magazine whilst hiding his true colours. Additionally, he also misrepresented himself to the [Women for Aryan Unity], who have entrusted to him a portion of David Lane’s ashes for a scattering ceremony soon, which we will request be returned to them.

We’d ask that all comrades shun this person by not purchasing or promoting Indigenous Hate or releases they may do in the future, etc. etc.

In unity and for the 14 Words,
Blood & Honour Australia

Cratchley–to be confused with Critchley–is a man of many hats, being, inter alia, both a member of the NSW Humanist Society and a regular at neo-Nazi social club Klub Nation: a KKKlub which, until very recently, met at Humanist House in Chippendale, and which B&H Australia claims is actually ‘Combat 18’. If B&H is correct, then C18 operates in both Perf and Sydney, has been meeting regularly in Chippendale, and attempted to stage a hostile takeover of the Humanist Society of NSW.

I live in Melbourne, Australia. I like anarchy. I don't like nazis. I enjoy eating pizza and drinking beer. I barrack for the greatest football team on Earth: Collingwood Magpies. The 2021 premiership's a cakewalk for the good old Collingwood.
View all posts by @ndy →
This entry was posted in Anti-fascism, Broken Windows, State / Politics, War on Terror and tagged Combat 18, Jacob Marshall Hort, Nicholas Cole, Robert David Critchley. Bookmark the permalink.

3 Responses to WA Police ~versus~ Combat 18