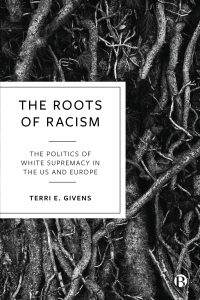 On this week’s episode of Yeah Nah Pasaran! on 3CR we talk to Terri E. Givens [Twitter]. Terri is a Professor of Political Science at McGill University and the author of The Roots of Racism: The Politics of White Supremacy in the US and Europe (Bristol University Press, 2022):

Racism has deep roots in both the United States and Europe. This important book examines the past, present, and future of racist ideas and politics. It describes how policies have developed over a long history of European and White American dominance of political institutions that maintain White supremacy.

Givens examines the connections between immigration policy and racism that have contributed to the rise of anti-immigrant, radical-right parties in Europe, the rise of Trumpism in the US, and the Brexit vote in the UK. This book provides a vital springboard for people, organizations, and politicians who want to dismantle structural racism and discrimination.

• This episode will be available as a podcast on Apple, Spotify and other platforms after broadcast.
• We also have a Facebook page for the show, which you’re invited to ‘Like’ and to ‘Follow’.
• I have a Patreon account which youse are also invited to support.

I live in Melbourne, Australia. I like anarchy. I don't like nazis. I enjoy eating pizza and drinking beer. I barrack for the greatest football team on Earth: Collingwood Magpies. The 2023 premiership's a cakewalk for the good old Collingwood.
View all posts by @ndy →
This entry was posted in Anti-fascism, Death, History, Media, State / Politics, That's Capitalism!, War on Terror and tagged 3CR, Terri Givens, The Roots of Racism, The Roots of Racism: The Politics of White Supremacy in the US and Europe, Yeah Nah Pasaran. Bookmark the permalink.