A few weeks ago, a group of nazis walked into a bar.

TL;DR: a bartender spat in one of their beers and told them to leave; reportedly (as a result of a social media campaign by the nazis and their friends), the pub’s management subsequently sacked this worker (and one other), issued an apology to the nazis and their leader, Tom Sewell, and paid one of them, Stefan Eracleous, $651 for the privilege (the ’51’ being a reference to the 51 Muslims slaughtered by a neo-Nazi in Christchurch in March, 2019). 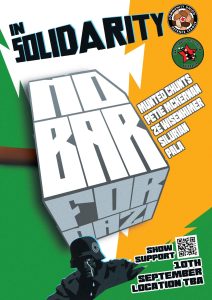 This coming weekend (Saturday, September 10), a benefit gig has been organised by the James Connolly Association Australia and the Community Union Defence League. At the request of the sacked workers, monies raised will be donated to a queer charity nominated by them. For more information, please see : Irish times pub: workers solidarity fundraiser.

Speaking of nazis who attended the bar in early August, in addition to Stefan Eracleous, Jimeone Roberts (earlier convicted of spreading nazi propaganda in Caulfield in an act described by Magistrate David Starvaggi as ‘one of the most disgusting, vile, repugnant acts of antisemitism and racial behaviour that I have ever seen’) and Ricky Turner, last week serial pest Neil Erikson had his appeal against a conviction for disturbing a religious gathering denied, and on Thursday was sentenced to 40 days’ jail.

In 2022, ‘Chief Judge Kidd found Erikson had shown no insight into his offending and the punishment needed elements of general deterrence for him and public denunciation’, while in 2014, after being found guilty of stalking a local Melbourne rabbi and sentenced to a 12-month community correction order, Magistrate Donna Bakos said she had no doubt Erikson’s calls were motivated by prejudice and found he had little remorse for his crime. In NSW, Erikson has an outstanding warrant for allegedly disturbing another Christian service in Gosford in 2018, and a month after the Christchurch massacre, in April 2019, he disrupted a Muslim prayer service in Federation Square. Sentenced to 28 days’ jail in May 2021 (Far-right extremist lodges appeal against jail term just hours after being taken into custody, Sarah Farnsworth, ABC, May 11, 2021), I’m unsure what became of his appeal.

Cameron Brodie-Hall, a graduate of Iron March, ‘has applied for home detention bail in the Adelaide Magistrates Court to live with his parents after being charged with possessing extremist material in April 2021. He is yet to enter a plea to the charges’ (Accused supporter of Adelaide neo-Nazi movement Cameron Brodie-Hall applies for home detention bail, Meagan Dillon, ABC, August 30, 2022).