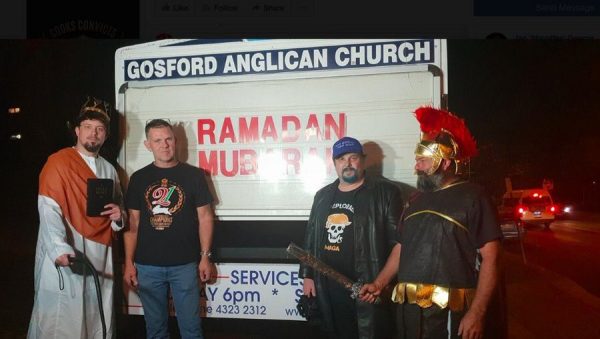 ‘Cooks Convicts’ — on this occasion, being repped by Neil Erikson, Paul Exley, Rino ‘Bluebeard’ Grgurovic, Danny Peanna/Parkinson and Lachlan/Logan Spalding — disrupted the 6pm service at Gosford Anglican Church on Saturday night. Dressed as Jesus(?!), the convicted anti-Semite and racist Erikson talked shit thru a megaphone while the priest, Father Rod Bower, asked them to leave and to stop harassing the dozen or so old people who’d joined him in prayer. Exley and Peanna/Parkinson were members of the now-defunct micro-Party for Freedom (PfF), which in August 2016 staged a similar disruption. On that occasion, Exley and Peanna/Parkinson were also present. (See : Anti-Islam group ‘Party for Freedom’ disrupts Sunday service in ‘racist stunt’ at Gosford’s Anglican church, Danuta Kozaki, ABC, August 2016.) Note that the PfF has recently completely fallen apart, and the remnants — including Nick Folkes, Toby Cook and Matt Lowe — have gone ‘full nazi’. Also: oddly, ex-PfFer George Jameson didn’t take part in Erikson’s latest stunt but was in Melbourne, where he joined Avi Yeminem and a tiny clutch of ‘Australian Liberty Alliance’ members in a counter-rally the ALA organised in response to a Palestinian solidarity rally outside the State Library. As for Erikson, on May 11 he got another slap on the wrist for contempt of court. See : Neil Erikson, who ambushed Sam Dastyari on video, avoids jail for contempt of court, James Oaten, ABC, May 11, 2018.

Huh. That was weird. On Friday, I received a message from some body called Pete D’Abrosca, who asked ‘Whatever happened to the old Melbourne Antifa page that caimed [sic] the Vegas shooting?’, to which I replied ‘I assume it got deleted.’

Pete D’Abrosca: ‘Is there a way to know for sure that it was a hoax? Or do I have [to] trust “real antifa” and Snopes?’
slackbastard: ‘Well I reckon it was a hoax. And I should prolly know.’
Pete D’Abrosca: ‘How?’
slackbastard: ‘For a no of reasons: I live in Melbourne; I’ve been participating in anti-fascist activism for years; I know other anti-fascists in Melbourne; I read it; like other fake pages, it was a garbagefire; it appeared along w a slew of other such pages.’

This was apparently sufficient for D’Abrosca to pen an article for a nü right-wing site called ‘Big League Politics’. Titled ‘FACT CHECK: Did Snopes Source an Anonymous Blogger to Challenge the Veracity of an Established News Source?’ (May 17, 2018), D’Abrosca writes:

Mr. slackbastard gave a number of reasons why we should believe him and Snopes’ version of the events.

He lives in Melbourne. (Obviously he knows everyone in Melbourne).
He’s been “participating in anti-fascist activism for years.” (One can only imagine the amount of brain damage caused by such activity, which actually tends to discredit his claims further).
He “knows other anti-fascists in Melbourne.”
Finally, the page was a “garbagefire.” (Garbage fire spelled as one word).

LOL. In any event:

• I pegged the ‘Melbourne Antifa’ Facebook page as an exercise in trollery six months prior to when The Daily Mail‘s Stephen Johnson used it as the basis of a fraudulent claim;
• ABC-TV’s ‘Media Watch’ program examined the avalanche of fake news generated by the Las Vegas shooting, including the idiot claim inre ‘Melbourne Antifa’, in the episode broadcast on October 9, 2017;
• There’s good reason The Daily Mail has been tagged as ‘unreliable’ by Wikipedia.

The local Hitler Yoof done a coupla banner drops over the Eastern Freeway today. More on them laters …