antifa notes (april 24, 2017) : fakes and frauds and fascists and facebook 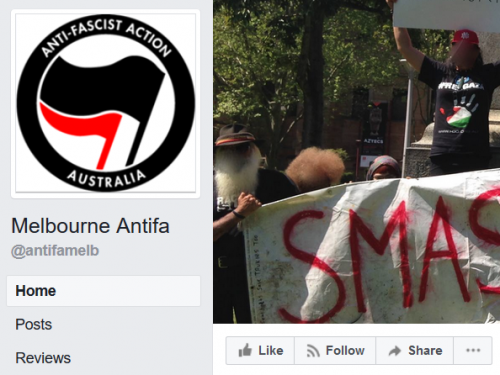 A fake ‘Melbourne Antifa’ page has been published on Facebook: https://www.facebook.com/antifamelb/; you can leave them a one-star review if you like. In any case, try Melbourne Antifa Info instead.

Nathan Sykes – AKA Hamish Patton from the DailyStormer.com from Aussie Lads on Vimeo.

Jewish neo-Nazi, Australia First Party (AFP) member and Daily Stormer writer Nathaniel Jacob Sassoon Sykes (AKA ‘Hamish Patton’) has been confirmed as one of the contributors to the ‘United Nationalists Australia’ blog and Facebook page (which largely functions as an online shitsheet for the AFP).

The Southern Poverty Law Center, along with its Montana co-counsel, filed suit in federal court today against the founder of a major neo-Nazi website who orchestrated a harassment campaign that has relentlessly terrorized a Jewish woman and her family with anti-Semitic threats and messages.

The lawsuit describes how Andrew Anglin used his web forum, the Daily Stormer – the leading extremist website in the country – to publish 30 articles urging his followers to launch a “troll storm” against Tanya Gersh, a real estate agent in Whitefish, Montana. Gersh, her husband and 12-year-old son have received more than 700 harassing messages since December.

See also : The man behind the neo-Nazi Daily Stormer website is being sued by one of his ‘troll storm’ targets, Abby Ohlheiser, The Washington Post, April 18, 2017.

Fortunately for the mixed-up Jewish neo-Nazi, Sykes’ own organisation and promotion of similar troll campaigns directed at various public figures in Australia remains entirely lawful and er, kosher. Further, Anglin is happy to have a Jewish man contribute to his hatesite.

April 4, 2015 was the date of the first series of ‘Reclaim Australia’ rallies; a second took place on the weekend of July 18/19, and the third and final series of rallies on November 22, 2015. Since that time, one other rally has been organised under the auspices of Reclaim, in Sydney on January 29, 2017, while a further rally is scheduled to take place on June 12 in Melbourne. Otherwise, the network has given birth to a range of other groups and projects, including the United Patriots Front (UPF), True Blue Crew (TBC) and Soldiers of Odin (SOO), each of which has staged its own events and activities.

Oh, and speaking of the TBC, their #BFF Phillip Galea was in court again last week:

An alleged extremist accused of plotting an attack against Melbourne’s anarchists engaged in “preparatory” acts rather than an actual terrorism attempt, a court has heard.

Phillip Michael Galea, 32, appeared in the Melbourne magistrates’ court on Wednesday via video link charged with collecting or making documents to prepare for terrorist acts between November 2015 and August 2016.

The anti-Islamist [sic] is also charged with acts in preparation for a terrorist act between September 2015 and August last year.

Magistrate Charlie Rozencwajg said Galea was charged with plotting, not with attempting to commit an attack. Galea’s defence team requested access to tapes and other prosecution materials.

Rozencwajg granted the request amid hopes the case could be expedited. He said Galea had allegedly engaged in preparatory acts of plotting attacks against various locations inhabited by Melbourne’s anarchists [?!] and the Melbourne Resistance Centre.

Prosecutors are relying on evidence contained in secretly recorded phone conversations during which Galea allegedly talks to other people about his plans.

Galea allegedly said: “They thought what I was planning before was dangerous. They’ve got no idea.”

The matter was adjourned until 28 April.

When Reclaim Australia first emerged, its figurehead was Shermon Burgess (AKA ‘The Great Aussie Patriot’), while in October 2015 Novocastrian John Oliver (Patriots Defence League of Australia), Wanda Marsh from Adelaide, and Liz Shepherd (AKA ‘Catherine Brennan’) in Sydney appeared as its putative leaders on Seven’s Sunday TV show. In 2016, the trio appear to have gone their separate ways, and there now exists two iterations of ‘Reclaim Australia’: one an incorporated association (including Oliver), the other under the control of Shepherd. It was this latter grouping that organised the rally in Sydney in January and is organising the Melbourne event in June (which has drawn the support of whatever remains of the TBC and assorted other dregs).

Prior to this, in May 2015, Burgess abandoned Reclaim to establish the UPF, which held its first, ‘anti-communist’ rally in Richmond that month, a feat which the TBC attempted to replicate in Coburg a year later. (Burgess abandoned the UPF to neo-Nazi and convicted stalker Blair Cottrell in late 2015.) The UPF held two more major rallies in Bendigo that year, on August 29 and October 10, both in opposition to the construction of a mosque, and one tiny rally in Melbourne (in November). The October rally attracted as many as 1,000 participants — the largest rally to be organised by either the UPF or Reclaim. Buoyed by this apparent groundswell of support, in November the UPF announced that it would be forming a political party, ‘Fortitude’, and in February 2016 they held meetings in Orange, NSW, Toowoomba, QLD and again in Bendigo in order to promote it. Sadly, the party never formed, and the UPF spent most of the rest of 2016 shedding members, engaging in publicity stunts, tagging along on other demonstrations, being a minor nuisance, and gathering tens of thousands of ‘Likes’ on Facebook. 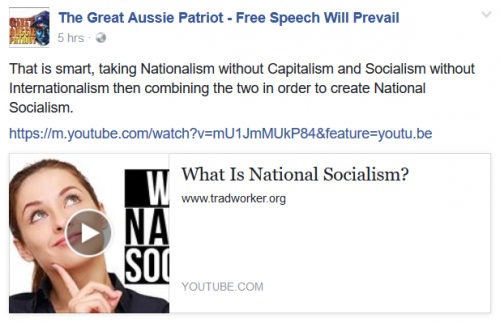 Recently, Burgess has been posing online as one half of Facebook page ‘Nationalist Uprising’ (previously: ‘Australian Settlers Rebellion’), talking up the threat (((bankers))) pose to the Western world, and opining that national socialism is actually A Jolly Good Thing. This has provoked local (Melbourne) crank and Pauline Hanson fanboy Avi Yemini to denounce Burgess as a ‘Nazi’. At the same time, the other half of ‘Nationalist Uprising’, Neil Erikson, has been trying to further distance himself from his neo-Nazi past (he has a criminal conviction for harassing a Melbourne rabbi and was active in various neo-Nazi projects for around 15 years or so), partly by way of cuddling up to … Avi.

Erikson hopping into bed with Yemini is slightly … odd … but comprehensible given how much they share in common, including but not limited to a pathological hatred of Muslims (along with dirty rotten stinkin’ commies: Public Enemy No.1 according to the new #BFFs), and joint opposition to non-White immigration (Yemini has likened African migrants to human garbage). Given that Yemini and UPF fuehrer Blair Cottrell — whom Erikson has denounced on many occasions as a ‘Nazi’ — have been making eyes at one another these last few months, it may even be that Erikson and Cottrell will kiss and make up at some point — perhaps while the pair are sitting together in court?

Of course, the other person Erikson and Cottrell have been jointly charged with — following the UPF stunt in Bendigo in October 2015 — is Chris ‘The United Nations is attempting to install the Pope as leader of a new world government!’ Shortis, who left the UPF to join the AFP last year. Slightly coy when under Cottrell’s fuehrership, the Christian fundamentalist bizarr0 is now openly promoting White nationalism (Cottrell continues to wear a mask), and has very grave concerns over the ‘Judeo-‘ in Judeo-Christianity, the poor boy. Note that all this is occurring just as fellow AFP member & Daily Stormer writer Nathaniel Jacob Sassoon Sykes has been exposed as … a Jew!

They’re a weird mob, and the weirdness extends to Nick Folkes and the Peanuts (‘Party’) For Freedom, who like AFP (and UPF) also apparently oppose ‘White genocide’. (Folkes himself has ‘mixed race’ children — which would seem to suggest that there’s one law for Nick; another for the rest of us: LOL!) Thus, in the latest in a seemingly endless parade of dingbat publicity stunts, on Easter weekend in Sydney, Folkes and a half-dozen or so other Peanuts picketed a childcare centre, babbling on about its dastardly dedication to committing White genocide thru integrated care. The fact that non-White folk, presumably residents and/or citizens, joined in the idiocy is somewhat remarkable … though it should also be obvious that the patriotik and White nationalist milieu in Australia is shot thru with such absurdities and contradictions.

Finally, to return to Cooma, when he’s not picking fights with the TBC 600kms away in Melbourne, Burgess can of course be found blathering away on Facebook, regurgitating half-digested and very dank memes produced by cranks like Alex Jones (see below). Oh, but while it remains unclear if Burgess has cleared his debt of $170,000+ to Sutherland Shire Council, on the weekend the keyboard warrior from Cooma was kicked off that rascally ‘Zionist’ Zuckerberg’s site. Peter Grace explains:

4) Some Dare Call It Stupidity

The King of the Konspiracy Kooks, Alex Jones, has had his lawyer admit in court that he’s, like, ‘playing a character’ (see : President Trump’s Favorite Conspiracy Theorist Is Just ‘Playing a Character,’ His Lawyer Says, Maya Rhodan, Time, Apr 18, 2017). This has not gone down too well with at least some of his fans, but the wanker who hounded families of the Sandy Hook massacre is also insisting others’ respect his privacy in his custody battle with his former wife (see : Sandy Hook truther Alex Jones asks for privacy in custody battle ‘for the sake of my children’, Cleve R. Wootson Jr., The Washington Post, April 22). For anyone who cares, an interesting profile of Jones was published in RS a few years ago. See : Meet Alex Jones, Alexander Zaitchik, Rolling Stone, March 2, 2011 (‘The most paranoid man in America is trying to overthrow the ‘global Stasi Borg state,’ one conspiracy theory at a time’). Otherwise:

What do you get when you combine an atomized, alienated public that possesses a deep and justifiable mistrust in institutions with a floundering press-political-entertainment complex that’s desperate to hold our nanoscopic attention spans? You get a nation of half-assed shamuses who’ve traded genuine political argument for paranoid fantasies about alien masterminds, lizard overlords, and government airplanes dispersing mind-control mist over population centers, not to mention presidential candidates who think and talk just like conspiracy theorists.

That’s Corey Pein (Protocols of Moron, Magical Thinking, The Baffler, September 20, 2016). His podcast, News from Nowhere, is also recommended listening, especially, in this context, episode one, in which he ‘considers the role of conspiracy theories in the 2016 US presidential elections, with special guest appearances by Alex Jones, Donald Trump, the John Birch Society and an assortment of Holocaust deniers and the politicians who pander to them, such as Green Party vice presidential candidate Ajamu Baraka.’ Closer to home, Jason Wilson contributes his conspiratorial insights in Conspiracy theories used to be a fringe obsession. Now they’re mainstream, The Guardian, April 13, 2017. See also : Alt Wrong, Richard Cooke, The Monthly, April 2017:

Given that Hanson is so often described as “speaking for” ordinary Australians, or ordinary people, or a silent majority, or a real Australia, one wonders why these constituencies have chosen a champion who isn’t much good at speaking at all. Hanson is not just inarticulate by the standards of a politician; she is inarticulate by the standards of ordinary people. It would not be difficult to enter an average pub or RSL club and find someone more knowledgeable, nuanced and capable of stringing a sentence together, and on just about any topic. But that is not what Pauline Hanson is for. Her similarity to Trump is much exaggerated (for one thing, she did not mount a hostile takeover of the Liberal Party), but they do share one critical component: their relationship with language.

On ‘conservatism’ in the US, also worth listening to is Corey Robin on the Reactionaries’ Minds Under Trump (The Dig, Jacobin, March 28, 2017): ‘What a moment to read, or to re-read, The Reactionary Mind: Conservatism from Edmund Burke to Sarah Palin, political scientist Corey Robin’s 2011 collection of essays — especially if you need to disabuse friends and family of the notion that Trump is some historic degradation of conservatism’s good name rather than a malignant, nasty outgrowth of a long history of violent reaction against left movements for equality.’

1 Response to antifa notes (april 24, 2017) : fakes and frauds and fascists and facebook