Reclaim Australia is still a thing, but only just. 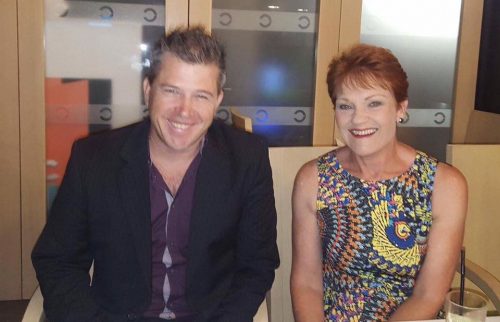 On Australia/Invasion/Survival Day, Dennis Huts (above) of the United Patriots Front (UPF) organised a small gathering of meatheads to protest the fact that Fremantle council had re-scheduled its nationalist celebrations for January 28. It attracted around 40-50 whingers. 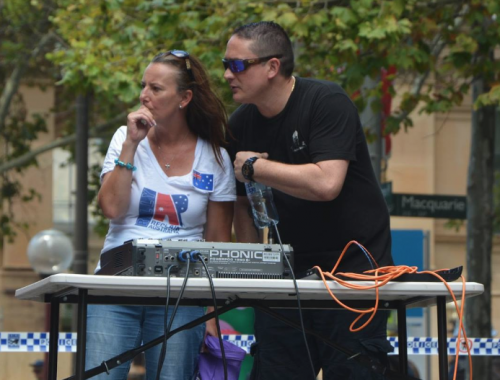 On Sunday, January 29, a group of perhaps as many as 80 or 90 bigots gathered at Martin Place in Sydney in order to rail ‘against everything from Muslims to “leftard Marxists”, “fake news” and “feminazis”.’ MC at the event — organised by Liz Shepherd (AKA ‘Catherine Brennan’) — was Casey councillor, Rise Up Australia Party (RUAP) candidate, and fundamentalist Christian Rosalie Crestani (below, with neo-Nazi Sammy Binz of Right Wing Resistance Australia); speakers included failed Australian Liberty Alliance candidate and Adelaide resident John Bolton, Canberran Daniel Evans, Sydney local Nick Folkes (PFF), Brisbane boy and ex-RUAP candidate Scott Moerland (UPF) and Peter Vassiliou (RUAP). Valour thief and serial pest Ralph Cerminara (above, with Shepherd) was present, as was UPF fuehrer Blair Cottrell, a few dozen PFF members and supporters, some Christian fundamentalists, a handful of neo-Nazis, a lone Soldier of Odin, and various other whiny racists: basically, the dregs of the patriotik movement, with not much else to their name than a shitty flag to wave and a overwhelming sense of ressentiment. 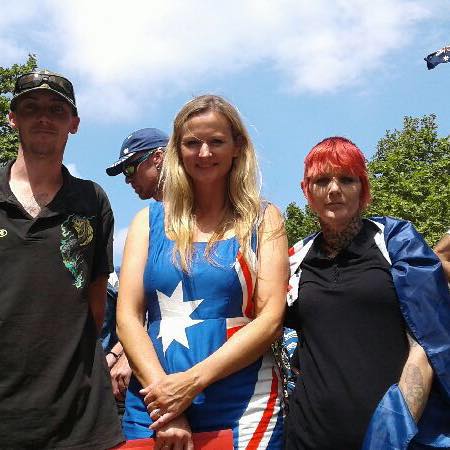 Apart from garnering a small amount of media attention, the Reclaimers also gave police and Sydney council an excuse to evict Sydney’s 24-hour ‘safe space’ for rough sleepers (Homeless ‘safe space’ evicted as anti-Islam protestors take to Martin Place, John Janson-Moore, January 29, 2017). Otherwise, Shepherd has declared that the next stop on the Reclaim failboat will be Melbourne.

See also : The anti-Muslim rally by far-right group Reclaim Australia was a fizzer, with more police and media turning up than protesters, news.com.au, January 29, 2017.

A radicalised white supremacist who was stockpiling homemade guns and weapons across Sydney had expressed an intention to commit a mass shooting at a popular Westfield shopping centre.

The disturbing case, uncovered by the Sun Herald, has highlighted the evolving threat posed by violent, right-wing extremism in Australia with experts warning against public complacency.

Holt is one of hundreds of right-wing extremists who talk shit online, crave RaHoWa, draw up lists of enemies, use their meagre resources to accumulate whatever weaponry they can, and phantasise about White revolution. He was also mates with local neo-Nazi Neil Erikson, with whom he shared both a political perspective and an hilarious sense of humour: 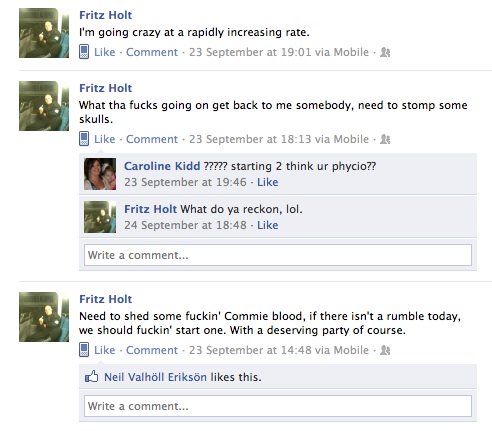 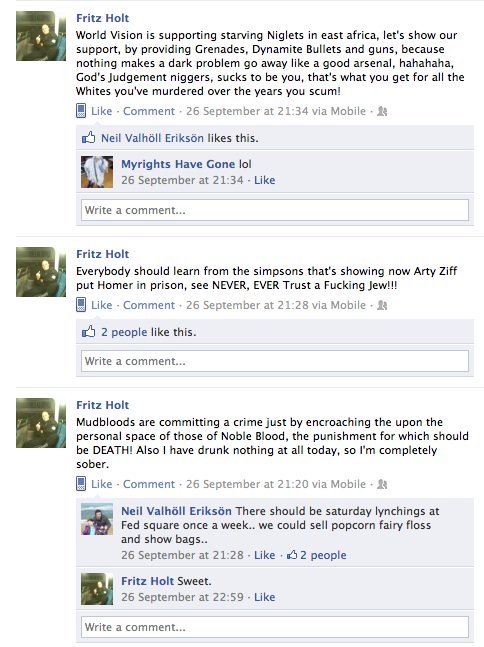 The #althug given #altright figure Richard Spencer Last Thursday has prompted a MEME FRENZY: Richard Spencer Getting Punched dot com has collected many, while The Washington Post provides A step-by-step guide to a meme about punching a Nazi in the face (Abby Ohlheiser, January 23, 2017), Mother Jones documents The Long History of “Nazi Punching” (Wes Enzinna, January 26, 2017), Thoughts On The Dead blog writes inre On The Propriety Of Punching Nazis, An FAQ (January 20, 2017), The Nation reckons Neo-Nazi Richard Spencer Got Punched—You Can Thank the Black Bloc (Natasha Lennard, January 22, 2017) and Andrew Norcross has published a quick helper to determine if you can punch a nazi.

Quartz: So, is it OK to punch a Nazi?

Žižek: No! If there is violence needed, I’m more for Gandhian, passive violence.

I once made a statement, maybe you know it, which cost me dearly. I said the problem with Hitler was that he wasn’t violent enough. Then I said, in the same statement, that Gandhi was more violent than Hitler. All Hitler’s violence was reactive violence. He killed millions, but the ultimate goal was basically to keep the system the way it was—German capitalism and so on—while Gandhi really wanted to bring down the British state. But his violence was symbolic: peaceful demonstrations, general strikes and so on.

If a guy talks like that jerk [Richard Spencer], you should just ignore him. If he hits you, turn around. Don’t even acknowledge him as a person. That’s the type of violence I would call for. Not physical violence. Because, you know, people say symbolic violence can be even worse, but don’t underestimate physical violence. Something happens when you move to physical violence. I’m not saying we should greet everyone, embrace them. Be brutal at a different level. When you encounter a guy like the one who was punched, act in such a way that even hitting him, even slapping him is too much of a recognition. You should treat him or her or whoever as a nonperson, literally.

‘Ignore them’ is an interesting line for a communist philosopher to take, but so too is describing Hitler’s ‘ultimate goal’ as preserving German capitalism rather than, say, annihilating European Jewry.

For a more serious account of the origins and development of ‘the far right movement that embraced Donald Trump’, see : Ctrl-Alt-Delete: The origins and ideology of the Alternative Right, Matthew N. Lyons, Political Research Associates, January 20, 2017.