Re the mosque shooting in Québéc, while authorities have charged a 27yo White nationalist, Alexandre Bissonnette, with six counts of murder, it was only an hour or two after the incident that the shitposting started, with two supposed Syrian refugees, ‘Bashir al-Taweed’ and ‘Hassan Matti’, nominated as being responsible for the murders.

This fabrication was based on:

Last night, shortly after the shooting, a witness who asked to remain anonymous told Radio-Canada that two masked individuals entered the mosque.

“It seemed to me that they had a Québécois accent. They started to fire, and as they shot, they yelled, ‘Allahu akbar!’ The bullets hit people that were praying. People who were praying lost their lives. A bullet passed right over my head.

“There were even kids. There was even a three-year-old who was with his father,” the witness said.

The latest information from provincial police, however, is that there was only one shooter.

Note: the final line was a later edit. 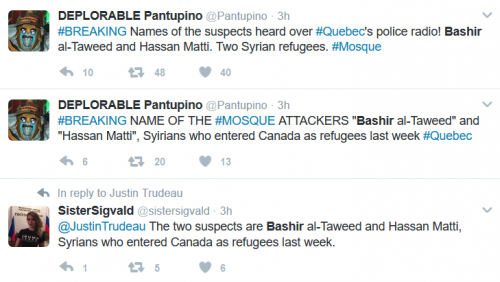 As far as I can ascertain, the neo-Nazi Twitter account ‘SisterSigvald’ was the first (on Twitter) to claim that ‘The two suspects are Bashir al-Taweed and Hassan Matti, Syrians who entered Canada as refugees last week’. The ᛋᛋ (hurr hurr) account was opened very recently (January 21), and is dedicated to pumping out an endless stream of nazi/#AltRight propaganda.

Naturally, the nazi Sister’s claim was immediately picked up by others, and sparked an avalanche of shitposting. Another Twitter account, ‘Pantupino’, added a further spicy detail, claiming that the ‘names of the suspects [were] heard over Québéc’s police radio!’ Again, completely unsubstantiated, and immediately gobbled up and republished by thousands of other shitposters.

Both the CBC report and the allied claims likely have their origins on 4chan and /pol/, for teh lulz, and to demonstrate — if any further evidence were needed — how piss-easy it is to troll the mainstream media, especially in the wake of Something Awful happening, and when journalists are scrambling to assemble anything resembling a story. 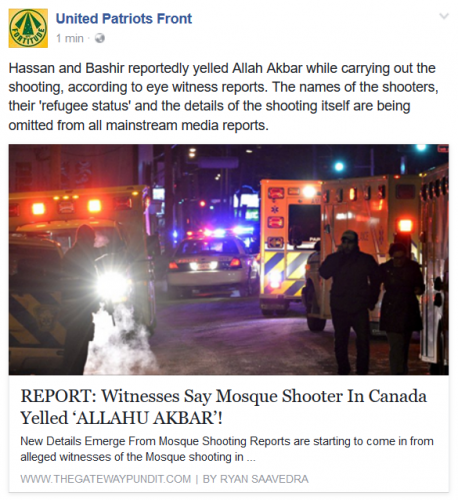 Otherwise: the claims re the supposed Syrian refugees responsible for the massacre were immediately republished by local patriotik heroes ‘Australian Settlers Rebellion’ and the ‘United Patriots Front’, and no doubt hundreds if not thousands of other patriotik shit-for-bRanes. In this regard, the claim is not dissimilar to the other fairy story regarding the recent massacre in Melbourne, of which one l00n claimed that not only was the accused man, Dimitrious “Jimmy” Gargasoulas, screaming ‘Allahu Akbar!’ as he drove his car, but also pumping out Arabic musik from his car stereo: a fraudulent claim, disproved by the available evidence, but valuable grist for the anti-Muslim propaganda mill, and serving a very large, wonderfully gullible, and idiotic fanbase.

The moment we no longer have a free press, anything can happen. What makes it possible for a totalitarian or any other dictatorship to rule is that people are not informed; how can you have an opinion if you are not informed? If everybody always lies to you, the consequence is not that you believe the lies, but rather that nobody believes anything any longer. This is because lies, by their very nature, have to be changed, and a lying government has constantly to rewrite its own history. On the receiving end you get not only one lie—a lie which you could go on for the rest of your days—but you get a great number of lies, depending on how the political wind blows. And a people that no longer can believe anything cannot make up its mind. It is deprived not only of its capacity to act but also of its capacity to think and to judge. And with such a people you can then do what you please.