The “UPF” Goes To Dimboola

On Australia/Invasion/Survival Day, a fund-raising event was held at the Victoria Hotel in Dimboola. The event included a ute muster and a performance by a comedian, Dave Ivkovic, and was promoted by an organisation called the Australian Horizons Foundation (AHF).

The marketing and fundraising chairperson for AHF is a woman called Anita Donlon.

Donlon has been involved in a range of fund-raising activities over the last few years, on behalf and in the name of numerous other projects, including ‘Friends of Small Towns’ and ‘Shout A Mate’, but is perhaps best known for her roles in a community campaign to halt the construction of a mosque in Bendigo and as one of the organisers of the ‘convoy of no confidence’ in the Gillard Labor government. [1]

According to the Banner, among those who attended the Dimboola event was ‘Farma john’ Wilkinson.

‘Farma john’ is best known for his participation in the Melbourne-based fascist groupuscule ‘United Patriots Front’ (UPF). [2] In May 2016, for example, he joined the UPF contingent and spoke at a dairy farmers’ rally on the steps of the Victorian State Parliament. [3]

The leader of the UPF is neo-Nazi from Frankston called Blair Cottrell. Cottrell has expressed a desire to see a portrait of Adolf Hitler hung in Australian classrooms and for copies of Mein Kampf to be issued annually to students. [4] He also has criminal convictions for arson, drug trafficking, stalking and other offences. [5] Cottrell, along with others, is currently facing charges of religious vilification as a result of a promotional stunt by the UPF in Bendigo in October 2015. [6] While Farma john also took part in the stunt, he is not one of those being charged.

Apart from fundraising, the AHF event was also used to help promote the Australian Country Party, with its propaganda being distributed among those who attended. Attendees, including ‘Farma john’, also flew UPF flags. 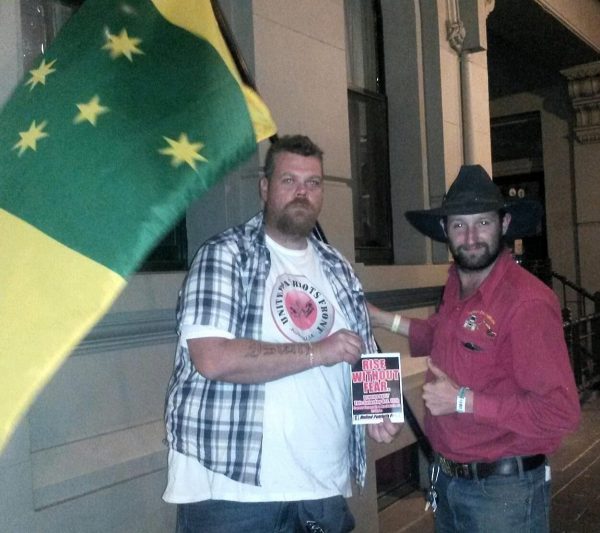 [Above : ‘Farma john’ Wilkinson in Bendigo with UPF supporter Nicholas Edward Abbott; in December 2016, Abbott got a slap on the wrist for being naughty at the ‘True Blue Crew’ anti-leftist and anti-Muslim rally in Coburg in May 2016.]

[1] Donlon’s participation in the ‘convoy of no confidence’ is noted in The number of drivers joining the ‘convoy of no-confidence’ has failed to meet organisers’ expectations, James Massola, The Australian, August 22, 2011. A former Liberal Party candidate for Bendigo West, Donlon was also ‘the spokeswoman for the Australian Consumers and Taxpayers Association, a group that is leading a vocal campaign against the carbon tax’ (Three Liberals seek Bendigo pre-selection, Brett Worthington, The Bendigo Advertiser, June 26, 2012). In March 2013, an article in The Advertiser states that ‘Deputy Liberal leader Julie Bishop inadvertently posed for photos with CATA organiser Anita Donlon outside Parliament House after the group were ejected’; the same article notes that CATA ‘is the group responsible for the “Ditch the Witch” and “Bob Brown’s bitch” protests at Parliament House in 2011’ (Day one and the insults resume for Julia Gillard, Lanai Scarr and Tory Shepherd, The Advertiser, March 12, 2013).

At the 2013 federal election, Donlon ran as a candidate for the Palmer United Party, gaining 2,336 votes (2.5%). In 2016 she had another tilt at the seat as an independent, receiving 1,922 votes (2.0%). In 2016, Donlon was also busy ‘shouting a mate’ (Crowd-funding project aims to supply grain to Tasmanian farmers, Roger Hanson, The Mercury, January 20, 2016); according to The Weekly Times (Farm charities are helping landholders in need, Sarah Hudson, March 30, 2016): ‘Bendigo’s Anita Donlon started Shout A Mate in 2011, educating about rural issues through its online radio show (shoutamate.com), as well as campaigns such as the current Grains for Tassie Farmers, which aims to buy 10 container loads of grain, at $10,000 per container, to send to drought-affected Tasmanian farmers. The campaign is crowd-funding through OzCrowd but will also see a series of music events which included their first at the Bush Pig Inn in Bendigo on Easter Saturday.’ The Bush Pig Inn was also the venue for a UPF event in June 2016.

[2] When formed in early 2015, membership of the UPF was a loose network of radical right-wing activists with a largely informal membership. After Blair Cottrell declared himself to be its leader, in late 2015 and early 2016 — and especially after the group published a website — nominated members (have) included Cottrell, Shermon Burgess, Kevin Coombes (‘Elijah Jacobson’), Neil Erikson, Dennis Huts, Kris0 Richardson, Thomas Sewell and Chris Shortis. ‘Farma john’ has been an active participant in most if not all of the events organised by the UPF.

In November 2015, Wilkinson was a speaker at the Reclaim Australia/UPF rally in Melton. According to Shakira Hussein (Anti-Muslim rally reveals a racism both shocking and commonplace, Crikey, November 23, 2015):

… the next speaker, “Farmer John”, deviated from the approved script by telling the crowd at his anger with “dirty Arabs” who think they’re entitled to get priority over our disabled children. “Do we want an Islamic school? NO! Stick it up your arse!”

[Rosalie] Crestani moved hastily to cover up that faux pas once she took back the microphone. “I do know a few Arabs and there’s a few good ones out there, so I just thought I’d clear that one up. This isn’t about ethnicity.”

Yeah, right. Some of your best friends are Arabs. Stick it up your arse, as Farmer John would say.

According to another report (Anti-Islam, anti-racism protesters clash at violent Melton rallies, Cassie Zervos, Andrew Jefferson, Kara Irving, Herald Sun, November 23, 2015): ‘Farmer John, from United Patriots [Front], spoke to the crowd while it chanted “No Muslims in Melton”, and threatened more violent action. “We’re going to burn every mosque down if they build them … Let’s stick it up them,” he said.’

Wilkinson also had a close relationship with alleged ‘terrorist’ Phillip Galea. In January 2016, the Herald Sun (Police on the hunt for missing stun guns amid fears of use by extremists, Angus Thompson, January 13, 2016) reported that:

POLICE are on the hunt for several missing stun guns they fear will be used by anti-Islamic extremists in increasingly ­violent rallies.

United Patriots Front member Phillip Galea has been bailed for the second time in weeks, despite the Arson Squad’s concerns that he is providing weapons to other Right-wing activists.

Explosives and Arson Squad Detective Sergeant Paul Tierney this week told a magistrate that detectives began monitoring Mr Galea after his involvement in a public clash over the proposed Bendigo Mosque last August.

“He’s been at most rallies that have resulted in violence.

Mr Galea was found with five stun guns, a jar full of mercury and bomb-making guides on his computer when investigators searched his Braybrook home in November.

He was jailed for a month and fined $5000 but was bailed on November 24 after appealing against his sentence.

He was rearrested this month when police accused him of breaching the terms of his bail by associating with UPF associates at a Sandringham pub.

Det Sgt Tierney said Mr Galea met anti-immigration ­activist “[Farma john]” Wilkinson, as well as other UPF members, across the road from a UPF barbecue at Sandringham Beach on January 3.

The court heard that Mr Wilkinson told police on January 7 that he had bought up to 22 stun guns, and that police were still searching for seven of these.

The court also heard that police had arrested Mr Galea on October 10, after receiving intelligence that he intended to use flares in clashes with anti-racism activists.

But defence lawyer Bill Grimshaw said Mr Galea had arrived at the Sandringham pub under the impression that the UPF event had concluded, and that he had “stuck to the letter” of his bail conditions.

Despite this, Mr Grimshaw said his client “should have been more prudent.”

Magistrate John Murphy granted Mr Galea bail after raising concerns that he would serve the term of the original sentence he was appealing against while on remand.

The matter has been ­adjourned to January 27.

In February 2016, another Herald Sun report stated that ‘Galea said “[Farma john]” Wilkinson, a man alleged to have supplied him with cattle prods, had since turned himself in to police’ (Accused anti-Islam stun gun extremist granted social media access, Angus Thompson, February 19, 2016).

[3] In May 2016, a handful of UPF members, including Wilkinson and UPF leader Blair Cottrell, attended a rally by dairy farmers in Melbourne (Cottrell was booed off stage).

[5] Cottrell’s criminal record is detailed in a report by Geir O’Rourke and Angus Thompson in the Herald Sun (June 11, 2016). Of his offending, they write: ‘Cottrell, 26, was sentenced to four months in prison in May 2012 after being convicted of 13 charges, including seven counts of intentionally damaging property. County Court Judge Michael Tinney convicted the then-22-year-old of throwing a missile, stalking, failing to comply with a community-based order, and two counts of recklessly causing serious injury. In December 2013 he was fined $1000 and sentenced to seven days in jail by a County Court judge for aggravated burglary, property damage, arson, trafficking testosterone, possessing a controlled weapon and breaching court orders.’ Cottrell, as ‘Bruce’, appeared in a documentary about youth in the maximum-security Youth Unit at Port Phillip Prison in Truganina, in which he describes how he abused steroids, stalked his former partner and her boyfriend, tried to kill him, set fire to their house, and eventually got arrested, convicted, and sent to prison.

[6] Charges, including religious vilification, have been laid against Cottrell and former UPF members Neil Erikson and Chris Shortis. Their first court hearing is scheduled for March 6, 2017.