On December 5, Phillip Galea was found guilty by a Victorian Supreme Court jury of carrying out acts in preparation for, or planning, a terrorist act, as well as attempting to make a document to facilitate a terrorist act, and will return to court for sentencing early next year.

• While Galea’s relationship to Reclaim Australia has been underlined in reportage on the guilty verdict, he had a range of associations over a much longer period of time. Thus in April 2010 Galea attended a farcical anti-Muslim and anti-immigrant rally in Melbourne organised by the ‘Australian Defence League’, and while Galea attended protest rallies organised under the banner of RA (along with admining an RA Facebook page), the United Patriots Front and the True Blue Crew, he also helped establish the RA Media website and ‘RA media newsgroupe’ Facebook page. 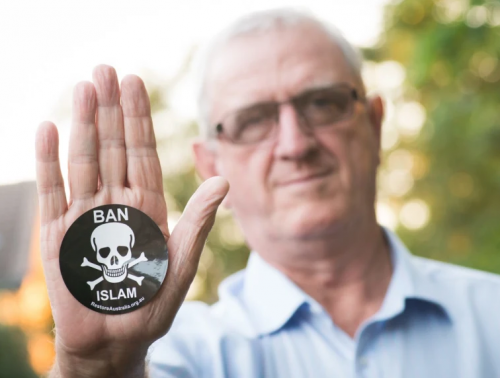 • Galea’s defence lawyer Felicity Gerry gamely argued that, rather than do terrorisms, Philthy was merely ‘recruiting investigators and editors, not terrorists’. This line was also adopted by right-wing l00n Mike Holt, one of Galea’s very few patriotik defenders, who in February reckoned his comrade was merely a ‘scientist and information gatherer’. LOL.

• Reference is also made to the fact that when arson and explosive experts raided Galea’s home in November 2015 they seized five cattle prods and 362.1 grams of mercury. Unmentioned is the fact that the cattle prods were apparently provided to Galea by UPF flunkey John ‘Farma’ Wilkinson, who remains active on the far right. 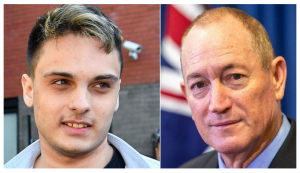 Fascist teenybopper Max Towns had much better luck in court this week than did poor olde Phil.

The far-right teenager who attacked two journalists at a Fraser Anning press conference has had his charges dismissed because he has anxiety, gambling problems and depression.

His mental health is so poor, a court heard, that his mum had to take him to the Fraser Anning event where the incident occurred.

Max Towns was 18 when he allegedly made obscene comments to Eliza Barr at the press conference in Cronulla in April.

According to police facts, Towns then attacked photographer Dylan Robinson who had intervened and taken pictures of the private school boy after hearing the slurs.

“The video clip shows the accused as the aggressor ripping the shirt of Robinson and punching out at Robinson,” the document released by the court reads.

Towns swiped at Mr Robinson’s camera, tore his shirt and struck his face before throwing punches that failed to connect with his target. The incident was captured on video.

He previously pleaded not guilty to offensive conduct, stalk or intimidate and assault.

Police bail documents state Towns is “an associate of a far right political group” and his “actions were unprovoked and against a member of the media in a political setting”.

He had attended Waverley College on a rugby league scholarship but never went professional.

Magistrate Michael Love, reviewing footage of the attack, said Towns has been “aggressive the whole time”.

”He was moving into alleged victim as opposed to swiping and moving away,” he said.

“He’s a young man who had a troubled past,” Mr Barber said.

“He had learning difficulties and certainly a psychological condition.”

Mr Barber called the attack “out of character” and said Towns has no history of violence or criminal record but admitted he had previously stopped taking his prescribed medicine.

He also said his client is so anxious in social situations his mum had to take him to the event.

”He finds it difficult in social gatherings that’s why she went with him,” he said.

”He’s paranoid, frightened in those situations.“

Towns, in a letter tendered to the magistrate, said he does his best to avoid physical confrontation “to the point of not leaving the house for days straight”.

“During the car trip I had numerous thoughts about turning back as I predicted a hostile environment, having seen threats on Senator Anning’s Facebook page regarding his meeting in Cronulla,” his letter reads.

Mr Barber also noted Towns’ gambling problems and said the media attention had been difficult on his mental health.

”There’s been a lot of publicity, it’s put enormous strain on the family – the Prime Minister commented on it,” he said.

Ultimately the magistrate dismissed the charges and ordered Towns to follow reasonable instructions of his psychiatrist and psychologist.

“If there is a repeat incident you may not get this opportunity again and you may face the full force of the law,” he warned Towns.

Towns spent the day chewing gum in the court waiting room and staring down The Daily Telegraph’s reporter before flashing the OK hand gesture.

His grandmother and mother shushed him as he called out “who do you work for?” as Mr Barber was approached for comment.

The barrister politely declined but noted he was “very happy” with the outcome.

Towns exited court into his grandmother’s car with a jacket covering his face.

He later said Towns had his own personal troubles but was a “good kid” and noted they dispute the police version of events.

tl;dr : ‘It’s Not OK To Punch Nazis, But It Is OK For Rich Kids To Punch Reporters.’

Max was one of a dozen or so brave ANZACs to join Blair Cottrell in chasing Dandyman outta Fed Square in June last year after Galea’s fave racist gang the True Blue Crew held its flagwit parade. The failed fuehrer from Frankston, described by the Christchurch terrorist as his ‘Emperor’, Cottrell awaits a verdict in his appeal against his September 2017 conviction for inciting hatred for Muslims, but otherwise appears to be enjoying life, having swapped his tomahawk for a hammer. 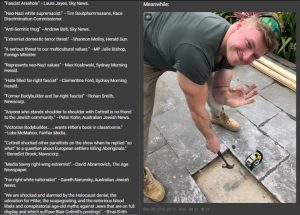 A few weeks ago, the Executive Council of Australian Jewry (ECAJ) published its annual report on anti-Semitism in Australia. The report features a number of The Usual Suspects, many of whom would appear to rejoice in their recognition. Among those popping the champagne corks is the Facebook page ‘Make Australia Grouse Again’ (https://facebook.com/makeaustraliagrouseagain5). On Gab, the same page provides a handy summary of a number of groups and individuals named in the report, about which I provide a few more details below: 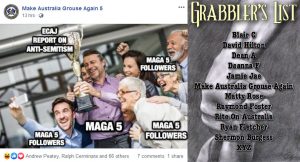 1) ‘Blair C’ = semi-pro neo-Nazi Blair Cottrell: inspiration to Brenton Tarrant, ‘mates’ with Adam Giles (the former Chief Minister of the Northern Territory (2013–2016) as well as the former leader of the Country Liberal Party (CLP)), currently appealing a criminal conviction for vilification, previously guilty of stalking his ex-girlfriend and her partner (armed with a tomahawk), arson, stalking and other offences.

2) David Hilton, once known as ‘Moses Apostaticus’, has contributed many essays to Tucker Carlson’s propaganda outlet ‘The Daily Caller’, and was invited by Rowan Dean of The Spectator (Australia) to contribute his sterling prose.

3) ‘Dean A’ = ‘Dean Anderson’, one of thousands of racist froot loops on Gab (AKA ‘Twitter for nazis’). ‘Dean A’ lives in Melbourne, apparently — which fact I assume makes him vewy vewy angwy & upset. 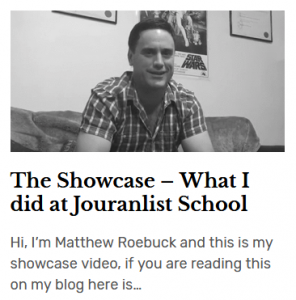 6) Raymond Foster is a rather cooked fellow from Queensland, who loves to have a yarn with the police who not infrequently knock on his front door. Otherwise, Raymond is very upset that in 2031 Whites will compose 50% of the Australian population, and wants to replace the current Queensland crop in the Senate with his own Good self. Good luck bro!

7) Rite-On Australia is a webshite and publishing projekt I haven’t bothered to look at in any detail, but: I’m sure it’s ace and; Neil Erikson popped up there at some point. Rite-On is a publication of ‘Sunshine Coast Safe Communities Inc’ and Ron Hutchins is its President.

8) Ryan Fletcher is an entertainingly batshit nazi who writes for XYZ and also composed From HEMP to Hitler, later voiced by the Crying Nazi Christopher Cantwell (Ryan is a YUGE fan). Often shitposting on Gab about killing Jews etc., he works in the aged-care sektor apparently. 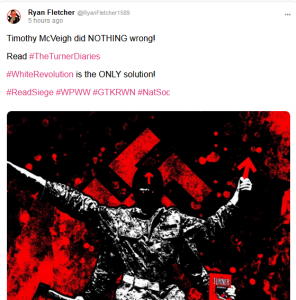 9) Shermon ‘The Great Aussie Patriot’ Burgess has gone quiet in recent months, but is a textbook example of how very patriotik Volk can often go Full Nazi … in his case, possibly triggered by the Zionist lobby’s attempts to keep blueberries xpnsv. 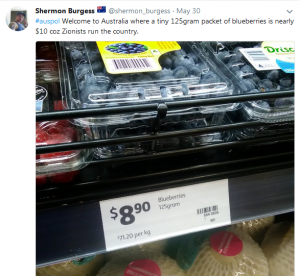 10) Finally, XYZ. I wrote about the meatheads responsible for this particular brand of anti-Semitic shite some time ago and they’ve ramped up the anti-Semitism quite a lot since then, but nonetheless have the 100% support of Facebook and of course YouTube.

Speaking of Facebook, it’s been the subject of further scrutiny in The Grauniad, which exposes the fact that the corporate juggernaut has been willingly engaged in a terrifically batshit and mildly profitable propaganda campaign directed at Ordinary Mums & Dads™ by some Israeli losers. See : Inside the hate factory: how Facebook fuels far-right profit, Christopher Knaus, Michael McGowan, Nick Evershed, Oliver Holmes, December 6, 2019. Currently, there’s a federal government Senate inquiry into ‘the rampant spread of “fake news” fuelled by foreign actors on social media’, one which will undoubtedly result in harsh penalties for the corporations responsible for profiting from lies and hate.

After a decade or so broadcasting as ‘Floating Anarchy’ on ‘The SUWA Show’ on Melbourne community radio station 3CR, Dr Cam and I have decided to return in 2020 in a slightly different, more regular (weekly) format, with a nü show called ‘Yeah Nah Pasaran’. More details to come …

• Scribe has recently published Jeff Sparrow’s essay on Fascists Among Us: online hate and the Christchurch massacre, ‘the first book since Christchurch to trace the massacre’s fascist roots and what it represents’. Jeff was nice enuff to gimme a guernsey in the Acknowledgements, and it’s recommended reading.

• A few days prior to the Galea verdict, the federal government announced its intention to spend lotsa filthy lucre on analysing and understanding cyber threats, including Reclaim Australia and ‘anarchist movement anTEEfa’.

THE federal government is spending millions of dollars to combat cyber threats including emotional manipulation on Reddit, a site co-owned by Serena Williams’ husband Alexis Ohanian.

Threats of far-right group Reclaim Australia and anarchist movement Antifa will also be probed in the Defence-funded research projects.

Universities and institutes have been invited to bid for a raft of research projects, worth up to $4.5 million, aimed at tackling rising cybercrime and the challenges the internet and social media present.

“Little work has been conducted on the analysis of the content of cyber messaging within the Australian ­content to identify why people become violent,” the tender document reads. “Linguistic analysis of groups and many lone actors indicate they leak their intent in ­cyberspace prior to an attack.

“The long-term goal of this research is to develop a framework that takes in cultural aspects and identifies escalating violence in language of groups and individuals in cyberspace prior to and during the radicalisation stages of extremism.” Another brief identifies emotional manipulation through Reddit as of “growing concern” for governments ­internationally.

The long-term goal of the research is to understand how people use the site to control the way Australians think.

“Understanding and quantifying cyber emotional influence in online platforms can allow us to identify and disrupt potential attacks,” the document states. “This research looks at quantifying emotional contagion on Reddit.” The Morrison Government yesterday announced $88 million for a new Counter Foreign Interference Taskforce to “disrupt and deter” anyone working to undermine the ­national interest.

“Foreign interference comes from many, many different sources and it’s important that we have the capacity to deal with it,” Prime Minister Scott Morrison said. “It’s an evolving threat and it’s also been a building and evolving response.” Meantime, former South Australian senator, now lawyer, Nick Xenophon yesterday announced he had taken on Chinese-owned telecommunications giant Huawei Australia as a client.

The federal government blocked Huawei from rolling out Australia’s 5G network due to security concerns.