[Update (November 19, 2019) : While Chasers has kept shtum, Dick has chosen the occasion of International Mens Day to announce that his MUFF has been postponed to April 2020. Sad!]

Above : Dick jumping on The Trump Train /// Meeting Stefan Molyneux.

This year, the principal venue for Richard Wolstencroft’s film festival, MUFF, is Chasers nightclub, ‘Home to the legendary super club night poof doof‘, as they describe themselves.

An AltRight propagandist, Richard ‘the Nazis only wanted a united Europe like the EU’ Wolstencroft gained some smol notoriety in 2017 when he denounced the degenerate poofs responsible for winning the same-sex marriage ballot. (See also : I’ll be as homophobic as I wish’: film festival director refuses to resign, Laurence Barber, Star Observer, June 15, 2018: “I can be as racist, homophobic, psychopathic as I wish to be. I’m tired of political correctness”).

FWIW, MUFF 2018 was hosted by the Anning fanboys at ‘StudioSpace For Hire’ in Moorabbin, where ‘Final Solution’ helped launch the ‘Australian Liberty Alliance’ Victorian state election campaign in October 2018; the same venue also hosted #Eggboy when the ex-Senator (now apparently chillin’ in Trumplandia) made his own party’s campaign launch in March 2019. 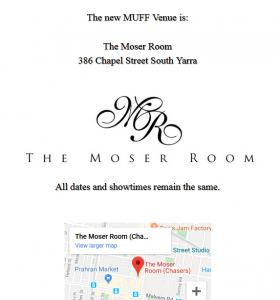