[UPDATE (November 21, 2017) : While it’s true that a majority of folks seem a bit pissed at Richard’s stoopid, for the defence, Ian Nicholson of Sydney Short Film School has come out all guns blazing. Go Ian! 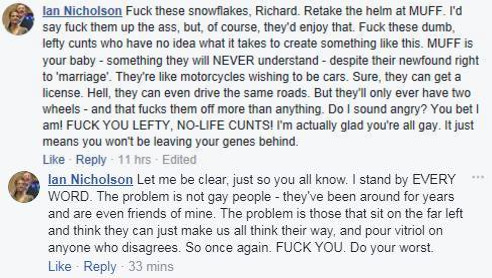 UPDATE (November 20, 2017) : Today Richard issued a garbled apology, announced his resignation from the role of Director, and appointed Frank Howson in his stead.] 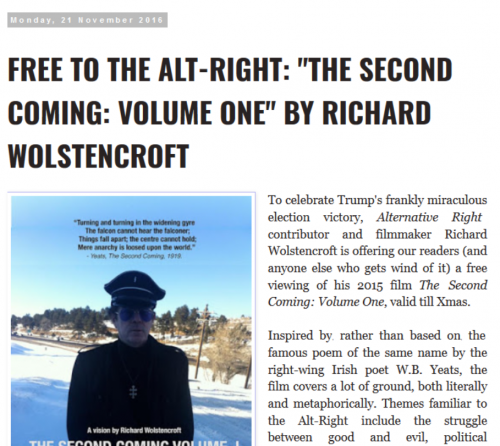 Local filmmaker, self-described ‘transcendental fascist’ and, more recently, Trump fanboy and partisan of the AltRight,* Richard Wolstencroft, established the Melbourne Underground Film Festival (MUFF) in 2000 after the Melbourne International Film Festival (MIFF) declined screening his 1999 film Pearls Before Swine; as one critic wrote of the film: I’ve kind of always distrusted Richard Wolstencroft, filmmaker, Melbourne Underground Film Festival director, and tedious bore, partly because of his avowed fascist tendencies. Now that I’ve paid money for and sat through his fucking film, I just want to beat the cunt senseless.

MUFF — for which Richard is Director-For-Life — is no stranger to controversy. In 2003, he attempted to arrange a screening of The Search for the Truth in History, a 1993 propaganda film by Holocaust denialist David Irving. The screening was eventually cancelled, as several hundred people protested outside the venue, including the Australian Jewish Democratic Society’s Sol Salbe [who] said: “I’m here because my entire family was wiped out in the Holocaust.” Previously, in April 2000, a High Court judge branded Irving a racist, an anti-Semite, a Holocaust denier and a falsifier of history; the legal saga was recently dramatised in the film Denial (2016).

Still, that storm in a teacup took place 14 years ago — and what’s a few million dead Jews to Melbourne’s film community?

Fast-forward to nao, and it seems that Richard’s big mouth has gotten him and his film festival/vanity project into trouble once again. On this occasion, his commentary** on the results of the Australian Marriage Law Postal Survey is what done it:

IMPORTANT – FILM FRIENDS PLS READ. This post was made by the founder and festival director of the Melbourne Underground Film Festival. After reading this, I will, of course, no longer be supporting MUFF. I strongly encourage all of you to join me. Please spread the word. pic.twitter.com/KHYZouJgRh

Things only got worse for Richard’s MUFF from this point, with the disgust at his homophobic stoopid leading to several sponsors (both knowing — howler bar — and unknowing — JOY 94.9) withdrawing their support, and one actor — Lachy Hulme — even deciding ‘to officially rescind my MUFF Best Actor award for “Four Jacks” (2001) and terminate any association with his film festival.’

Still, when all’s said and done, both Richard’s MUFF and the shit that regularly pours from his mouth and keyboard has come into criticism before, to little effect, and while it remains useful to him as a self-promotional tool, it seems likely MUFF will be back again next year, with new(er) sponsors and another crop of yuppie scum to entertain.

* Wolstencroft began contributing to the ‘Alternative Right’ blog in November 2014; its chief editor is Colin Liddell.
** On ‘decadence’, see : ‘Decadence’ by Alex Trotter (Drunken Boat, No.2, 1994).

5 Responses to Richard Wolstencroft & MUFF ~versus~ Those Degenerate Gays