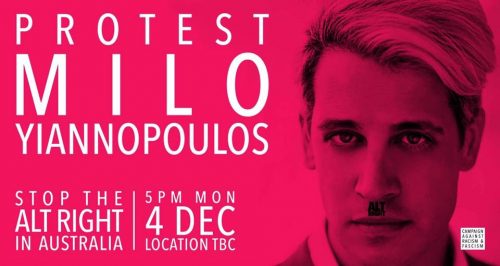 Next Monday, December 4, professional troll and Trump fanboy Milo Yiannopoulos is coming to Melbourne to talk shit. Milo’s tour is being sponsored by Penthouse magazine, with fellow trollumnists Andrew Bolt and Mark Latham lending their support as MCs. While writer Roxane Gay memorably described Milo as being responsible for propagating ‘racist and xenophobic and sexist ideologies … transphobia, anti-Semitism and Islamophobia’, publisher Damien Costas has even compared Milo to ‘Martin Luther King Jnr and the freedom riders in the 1960s’. (True story!) The media troll has also been invited by another (proprietarian) troll, David Leyonhjelm, to speak at federal parliament — which is about par for the course.

While promotional material for the tour cites Forbes (in 2012, Milo was ‘digital media’s Citizen Kane‘ according to Jennifer Kite-Powell), as Richard Cooke writes, ‘In so many ways, Milo Yiannopoulos is unremarkable. He is just one of a long line of conservative grifters making hay in Australia.’

Obviously, neither Milo’s endorsement of man-boy ‘love’ (child rape), nor his role as errand boy for neo-Nazis and fascists, has prevented him from being adopted as a mascot by local trollumnists and the AltRight; a fact which, given that they operate according to a very similar modus operandi, is perhaps not that surprising. Certainly, the Buzzfeed article by Joseph Bernstein (Here’s How Breitbart And Milo Smuggled [sic] Nazi and White Nationalist Ideas Into The Mainstream, October 6, 2017), which documents Milo’s function as a useful idiot for the AltRight, has been ignored by local fanboys. The dox charts the Breitbart alt-right universe. They reveal how the website — and, in particular, Yiannopoulos — links the Mercer family, the billionaires who fund Breitbart, to underpaid trolls who fill it with provocative content, and to extremists striving to create a white ethnostate.

A perfect fit for STRAYA eh …

January 20, 2017: Alt-Right Violence at the University of Washington in Seattle
A University of Washington talk by Milo Yiannopoulos—the notorious Twitter troll, ardent Trump supporter and former Breitbart editor credited with mainstreaming the alt-right—draws a large protest. A married couple, Marc and Elizabeth Hokoana, come to the event armed with pepper spray and a handgun to antagonize opponents. After protester Joshua Dukes confronts Marc about using the pepper spray, Elizabeth allegedly fires a single round into his stomach.