[Update (November 16, 2019) : Perhaps inevitably, the exposure of the nazis on Iron March has triggered a backlash. First, the Proud Boys have been mobilising to report Twitter accounts which details the leaks, with some smol degree of success. (Seemingly, the Boys want to protecc the reputation of Proud Boy Joseph Evans, who posted on the site as ‘OvenEngineer’.) Secondly, billionaire meathead Jack Dorsey and Twitter have suspended the account of The Jewish Worker (@jewishworker), much preferring the public use the platform to familiarise themselves with Richard Spencer‘s antisemitism than the news & views of Jewish workers. Finally, ironmarch-web.now.sh is down but ironmarch.exposed is up.]

[Update (November 15, 2019) : One local forum user, ‘Neizbezhnost’, has been exposed as 25yo Territorian Steve Braddy. See : Inside the twisted world of a braggart Australian neo-Nazi, Mark Schliebs, The Australian, November 15, 2019.]

The dump is rather large, contains lots of intriguing details, and will take some time to sort through. Still: ‘At least three members of the U.S. military were registered users on the influential neo-Nazi forum Iron March, according to an analysis of an anonymous data dump from the site this week. And one of them, a Marine, was apparently using Iron March to try to recruit people for a fascist paramilitary group he wanted to launch in the U.S.’.

The database is accessible through various means, but The Jewish Worker has published it in a more-easily searchable format here and/or here. There’s also been discussion about some of the technical details inre communications on the site and the various alternatives (Discord, Skype, encrypted email services) its users sometimes employed, with one blogger asking: ‘How do right-wing extremists secure their communications? The recent Iron March data leak gives insight into how its members tried to communicate outside the message board’ (Communications Security on Iron March – An Intelligence Analysis, Key Findings, November 9, 2019). 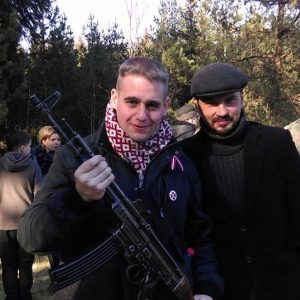 Curiously, one of the users cited in the keyfindings analysis, ‘Daddy Terror’ (AKA Benjamin Noyles AKA Benjamin Raymond, the founder of National Action), both ‘encourages people to act more sensibly so they don’t get themselves doxed by leftists’ and also claims (January 16, 2017) that, inre the exposure of US neo-Nazi activist Mike Enoch/Peinovich, ‘slackbastard is familiar to me as a grizzled australian antifa (maybe I am mistaken), the type of person you expect to be an internet antifascist, in his 40’s most likely and so I imagine there was a large team around him and he is probably getting money from somewhere’.

Note that, while a number of members of National Action have been jailed after having been found to be members of a proscribed terrorist organisation, ‘Daddy Terror’ Benjamin remains very much at-large. (On NA and its legal travails in the UK, see : ‘The Evolution of Extreme-Right Terrorism and Efforts to Counter it in the United Kingdom’, CTC Sentinel – Combating Terrorism Center at West Point, Vol.12, No.1, January 2019; ‘”Only bullets can stop us!” The banning of National Action in Britain’, Perspectives on Terrorism, Vol.12, No.6, December 2018).

The site, established by ‘Alexander Slavros’ AKA Alisher Mukhitdinov, gained some notoriety for helping give birth to Atomwaffen, though was also the launchpad for the Australian neo-Nazi groupuscule ‘Antipodean Resistance’ (AR). Indeed, just a few days prior to the leak, it was reported that: ‘Last year, a German offshoot of the U.S. neo-Nazi group Atomwaffen Division announced its existence to the world with a chilling video declaring “National Socialism is alive.” Now, it’s issuing death threats to left-wing German politicians’ (The German Branch of a U.S. Neo-Nazi Group Has a ‘Kill List’ of Left-Wing Politicians, Tim Hume, Vice, November 6, 2019), while in June Shane Burley and Alexander Reid Ross discussed how I was the target of alt-right death threats across the internet – here’s what happened next (The Independent, June 19, 2019).

As for the Australian contingent on IM, there were approximately 50+ users, most of whom left very interesting online trails. Some are known fascists: Lisa Beulah/Sandford AKA ‘Eva’ gets a guernsey, as does Matthew Grant AKA ‘Matty G08’ — Grant is the leader of the ‘Eureka Youth League’ (a tiny offshoot of the ‘Australia First Party’, but for yoof) — and even Shermon ‘The Great Aussie Patriot’ Burgess AKA ‘Aussie_Patriot’; others are more obscure. One example is ‘Sigurd79’ AKA Steven Pidgeon. Pidgeon appears to be Very Normie on his social media profiles — on Twitter he describes himself as a ‘Law and Business (HRM) Student – Aspiring Lawyer with a passion for law reform – Looking to leave the world a better place’ — but his postings and messages on IM suggest a rather more complex picture. 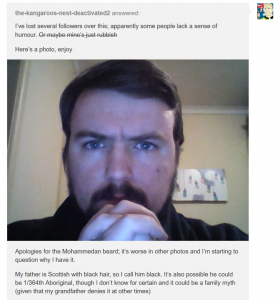