Update (January 16, 2017) : While recriminations on the #AltRight keep flying thick and fast and Mike’s wife has been revealed to be Jewish(!), the (((media))) has begun to pick up on the story. See : Does Neo-Nazi Media Kingpin Live on Upper East Side?, Dan Friedman, Forward, January 15, 2017; The alt-right eats its own: Neo-Nazi podcaster “Mike Enoch” quits after doxxers reveal his wife is Jewish, Matthew Sheffield, Slate, January 16, 2017 (‘Bad day for the Fourth Reich: Founder of popular alt-right blog The Right Stuff resigns after foes expose him’).] 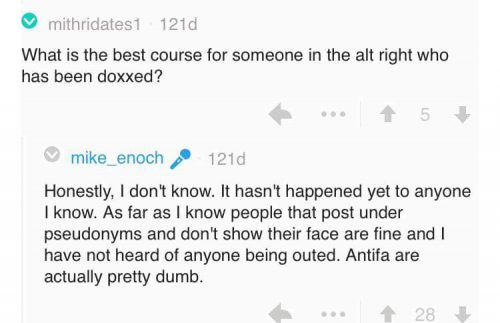 In the last coupla weeks, various nazi dingbats active on the #altright in the US have been doXXed — seemingly as a result of some internecine online warfare.

The latest casualty in this war is Some Guy called Mike Peinovich, AKA ‘Mike Enoch’. Peinovich is the lvl boss of a popular altright site called ‘The Right Stuff’ (TRS), established in December 2012, which hosts podcasts ‘Fash The Nation’ (August 2015–) and ‘The Daily Shoah’ (August 2014–).

It all started when Red Ice Radio hosted a discussion with the pseudonymous “Reactionary Jew” asking if reactionaries Jews had any place in the alt-right. Many meme hardened Nazi keyboard warriors were angered that the question was even being considered, and took to the alt-right Internet to denounce Red Ice’s capitulation to the Jewish agenda. Some regular posters from the 504ums (the private forum of The Right Stuff, home to The Daily Shoah, Fash the Nation, and our old pal Ghoul) took the side of Red Ice in the face of these attacks.

This was enough to set off a trollstorm on other boards, leading to TRS heavies, including Mike Enoch (founder of TRS), Seventh Son, and Bulbasaur, to be roundly accused of being soft on Jews and gays, of using message boards to “shill” for their own site (based simply on a few folks having shared some links), and of course, of being secret Jews or gays themselves. This touched off a puerile feud between boards, consisting mostly of idiotic trolling, immature accusations, and denial of service (DDoS) attacks.

TRS was given an ultimatum: apologize on the air, or face a doxing. As defiant screencaps from the 504um were leaked by TRS insiders onto other sites, Bulbasaur from TRS allegedly responded to a dox threat by daring people to try it. They called his bluff. When the dust settled, two prominent hosts of The Daily Shoah, including Bulbasaur, had been doxed by their own white nationalist “comrades.” This release of info also comes as another prominent Alt-Right celebrity, Millennial Woes has reportedly fled Scotland after having their information released as well.

As for Mike, originally published on Medium, the article ‘outing’ Enoch/Peinovich — Meet Mike Peinovich, the Upper East Side’s Neo-Nazi Media Kingpin — has since been unpublished by the site. The text reads as follows. Note that, for various reasons, I’ve removed some identifying content […] which the curious can probably find online elsewhere …

Mike Peinovich (alias “Mike Enoch”) is the founder and leader of The Right Stuff (TRS), an online hub of podcasting and networking for “Alt Right” neo-Nazis. TRS prides itself in its “edgy” podcasts, delighting in taking Alt Right politics to their logical conclusion, including favorable references to the Holocaust, ethnic cleansing, gaybashing, Islamophobic hate crimes, police shootings of black youth, and much more, often couched in a sizeable canon of hateful neologisms that require their own TRS-written lexicon to decipher. But don’t let the goofy jokes and veneer of irony fool you — TRS is dead serious, and central to a hard-core, explicitly neo-Nazi tendency in the Alt Right movement.

Peinovich’s pseudonym, taken from the white nationalist statesman Enoch Powell (and from removing a few letters from his own last name) is not as well known as the names Richard Spencer, Andrew Anglin, [Milo Yiannopoulos], and others who have forsaken private life and seem to revel in notoriety. But this does not make Peinovich any less important to the Alt Right than these figures. The only difference is Peinovich covets his anonymity, fearing the loss of his lucrative tech job (last listed as a company called Vook, which was renamed to Pronoun), backlash in his Upper East Side neighborhood, and alienation from his liberal family, rooted in the affluent suburb of Montclair, New Jersey. Far from the spotlight, Peinovich has created a dangerous neo-Nazi media and social network, out of […] a quiet street in Manhattan’s Upper East Side. 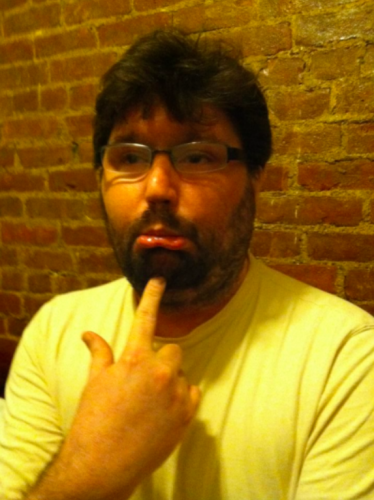 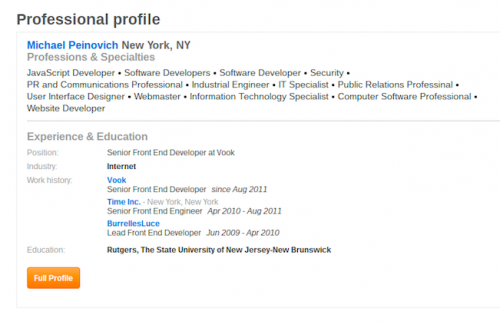 The TRS podcast “network” invokes a fictitious call number WKKK1488 FM, a reference to the KKK, the “14 words” of white nationalism, and the greeting “heil Hitler”. The network is home to the popular Alt Right podcast “Fash the Nation”, among many others with explicitly fascist, white nationalist, and neo-Nazi themes. Peinovich hosts TRS’s flagship podcast “The Daily Shoah” (a pun on the Shoah, or Holocaust), where he regularly rants, using every slur under the sun, in faux-intellectual stentorian monologues about the inferiority of anyone who is not a heterosexual white man. Peinovich and his fairly large cohort of radio hosts, bloggers, and activists advocate creating an “ethno-state” in the US by any means necessary, including the forced removal of all non-whites, Jews, and “deviants”, and a return to the patriarchal rule of white, heterosexual men.

Unsurprisingly TRS has been wildly supportive of Donald Trump, though they understand him not so much as the leader of their movement, but a great historical figure who has created an opening for their organization and related groups to function more effectively, while preparing the masses of white Americans for their message. As a part of their deliberate movement-building, TRS has provided an online platform for notorious white nationalists and Nazis such as Andrew Anglin of The Daily Stormer, Greg Johnson of Counter Currents, Matthew Heimbach of the Traditionalist Youth Network, video blogger Colin Robertson (aka Millennial Woes), and many other heavy hitting haters, including the Nazi dork himself, who is a big supporter of the project. In short, TRS is no fash in the pan operation. Since its beginnings in 2013, the network now boasts over 100k listeners each week for The Daily Shoah alone.

Peinovich’s The Daily Shoah is also the source of the (((Jewish Name))) meme, which originated from making Jewish names echo on the air, and was subsequently translated into anti-Semitic online harassment on Twitter and elsewhere, a self-conscious digital incarnation of the notorious star Nazis forced Jews to wear to identify themselves. Until dropped by the online seller, TRS devotees could order t-shirts subtly celebrating the crematoriums of Auschwitz, the “helicopter rides” in which dictator Augusto Pinochet murdered activists, and anti-Semitic conspiracy theories, allowing TRS devotees to safely advertise their affinities in daily life. Enoch is also responsible for the “white student union” hoax and maintains a noxious Twitter presence as @ThaRightStuff, instigating hateful trolling amongst his nearly 25k followers. In November Peinovich appeared in the closed session of Richard Spencer’s National Policy Institute (NPI) conference, prior to Spencer’s now-notorious toast of “hail Trump”, in a rare public appearance. Peinovich opted out of the regular conference programming out of fear of losing his cherished anonymity, and was given a platform to fund-raise last-minute by his friend Spencer, as he had been the year prior when he appeared alongside TRS associates Henrik Palgren and Lana Lokteff of the neo-Nazi Red Ice Radio. Most recently, Peinovich (as Mike Enoch) joined the board of directors of the 501(c)3 Center for the Marketplace of Ideas, an explicitly “Alt Right” non-profit organization run by white nationalist lawyer Kyle Bristow.

Through building a private Facebook group and the TRS messageboard, Peinovich has been central to a growing national network of activists who network at regular “pool parties” (real life meetups for TRS-affiliates) aimed at building an activist presence off the Internet, where TRS has mostly lived since its inception. Members of this network recently joined the Traditionalist Youth Network and the National Socialist Movement, for a “White Lives Matter” rally in Chicago, marking a turn in TRS from the shadows of pseudonymous podcasting and Tweeting, toward street mobilization.

This comes as other prominent co-hosts of The Daily Shoah have been outed: Cooper “Ghoul” Ward (also a member of the American Vanguard, another group trying its hand at a public presence), Van “Bulbasaur” Bryant II, and Jesse “Seventh Son” Dunstan. While Ward and Bryant quickly disappeared from social media and TRS, with Ward even offering to give up information on TRS in exchange for his identity being protected, Dunstan continues to Tweet and podcast as “Seventh Son”, joking about his doxing, and advertising his recent purchase of a shotgun. In any case, TRS clearly has aspirations far beyond pseudonymous podcasting and Tweeting, and it is very likely that Peinovich, its founder and leader, will remain central to this project even after his identity has been revealed. To this effect, the group is said to have prepared for this possibility for a long time, and Peinovich has stated that with the rise of Trump, he expects the Alt Right to be able to shed its pseudonymous existence in the near future. This means the pressure must be put on, and kept on, to deprive these scumbags of any platform or comfortable existence aboveground.

Mike’s most recently listed employer is a publishing start-up called Vook (renamed Pronoun). [Note : In May 2016, major publishing company Macmillan, itself a subsidiary of the Stuutgart-based Holtzbrinck Publishing Group, announced that it had purchased Pronoun.]

In 2010 Peinovich had a whiny anarcho-capitalist blog called “The Emptiness.”

Peinovich wrote this article for the Mises institute: https://web.archive.org/web/20160514080423/https://mises.org/library/burning-down-house-0

It was referenced at 13:25 of a July 24th, 2015 episode Red Ice Radio, featuring Enoch and Seventh Son (who we previously revealed as Jesse Dunstan of Fishkill, NY).

And in terms of a smoking gun, this Wayback Machine digital archive of TRS’s edgy lexicon from 2013 shows a Paypal link that goes to [email protected]:

Lastly, we’d like to thank Ghoul for the tips!

You can read a whole bunch more about Enoch/Peinovich and the Alt-Right on the site ‘Angry White Men’: (((Tracking the Alt-Right))).

PPS. Mike has apparently published a statement regarding his doXXing: 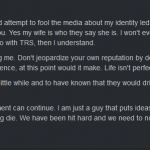 8 Responses to Meet Mike Enoch &/Or Mike Peinovich : They’ve got ‘The Right Stuff’