Blair Cottrell : ” … and I started getting arrested after I did that.” #Fortitude /// #UnitedPatriotsFront

Blair Cottrell — the leader of the United Patriots Front and Fortitude — appears as ‘Bruce’ in a recent documentary about youth in prison (the maximum-security Youth Unit at Port Phillip Prison in Truganina). In this passage he describes how he abused steroids, stalked his former partner and her boyfriend, tried to kill him, set fire to their house, and eventually got arrested, convicted, and sent to prison.

I knew steroids were always available to me, so I decided to buy some. I spent $1,000 on my first course, which was testosterone and dianabol … The aggression and the rage that I got from them almost was addictive. It made me feel good, it made me feel powerful. And every time my girlfriend would tell me ‘it’s enough now, you need to cut back, you need to take it easy, you’re getting too angry, you’re getting too big, you just look ridiculous’, I would sort of just dismiss it …

… I was friends with this guy for two years before she broke up with me. And I was under the impression that over these two years he had weaseled his way into her mind and influenced her to leave me and get with him. So I had convinced myself that it was his fault, and he needed to disappear.

When she cut me off, which [was] probably around mid-year, that’s when everything got really bad. I started obsessing about this guy. I used to walk past this guy’s house like ten times a night, up and down his street, just watching it, waiting for him to come out of it, and he never did. And I would leave him messages telling him to ‘stand up to me, stand up to me’ and he never replied.

When I never got a reply from him I started carrying knives, and like a hatchet, I had my hatchet … I had a little tomahawk … I had like this little tomahawk that I used to wear it, I put it inside my jacket and in the middle of the night, like one and two o’clock in the morning, I would go out the front of his house and like just hover around, and they always used to stay up really late and smoke bongs and the lights would always be on.

So I would sleep behind this little white picket fence across from his house and look through the cracks, at his house, and as soon as like the door would open my heart would skip and I would stand up and be holding a knife because I’d be ready to go round there and be ready to like kill him because I was pretty determined.

There was one time where he did come out his front door and I had jumped out from behind his fence with a tomahawk in my hand and he ran away. So I put the tomahawk back in my jacket and I chased him, screaming out, telling him to stop, telling him he was a fucking coward. I chased him down about three streets and then he disappeared and that just made me worse and then I started damaging his house I started throwing things at it, through the windows and like, I made a couple of Molotov cocktails, and lit his garage up with those … and I started getting arrested after I did that.

When he made an intervention order against me I took it seriously because it threatens you with two years jail if you break it which is like a restraining order. So I started trying to speak to my girlfriend again. Of course she didn’t speak to me after what I’d been doing …

Since his release from prison in May 2014, his public statements would suggest that Cottrell has not altered his views on women. He also regards feminism as being a Jewish plot. In any case, the neo-Nazi will be addressing a Little Nuremeberg rally in Bendigo this Saturday. A ‘March Against Fascism & Bigotry’ has also been organised. 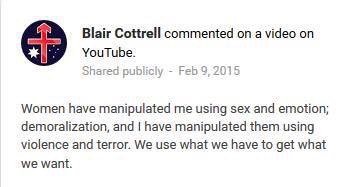 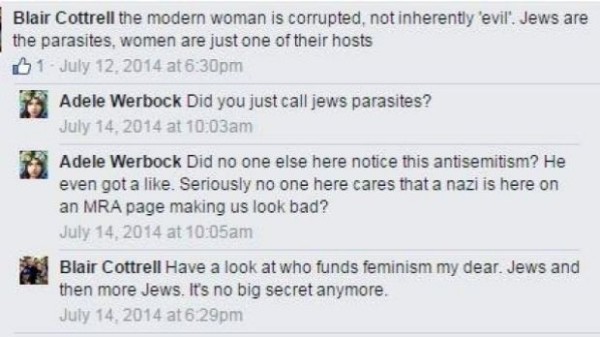 I live in Melbourne, Australia. I like anarchy. I don't like nazis. I enjoy eating pizza and drinking beer. I barrack for the greatest football team on Earth: Collingwood Magpies. The 2021 premiership's a cakewalk for the good old Collingwood.
View all posts by @ndy →
This entry was posted in Anti-fascism, Broken Windows, History, Media, State / Politics and tagged Blair Cottrell, Fortitude, United Patriots Front. Bookmark the permalink.

7 Responses to Blair Cottrell : ” … and I started getting arrested after I did that.” #Fortitude /// #UnitedPatriotsFront