Update (October 1, 2016) : A small rally protesting a proposal to house refugees at St Vincent’s in Eltham took place outside Jenny Macklin’s office this morning. In addition to a handful of locals, a few members of the Party for Freedom (SYD) participated, as did around one dozen ‘Soldiers of Odin’ and 20 or so members and supporters of the Melton-based ‘True Blue Crew’.

Three men — Neil Erikson, Chris Shortis, and one other — have been charged with offences allegedly committed during the course of a publicity stunt by the United Patriots Front (UPF) in Bendigo on October 4 last year. According to police:

It is alleged the men beheaded an effigy and damaged property in a public area on 4 October 2015.

– Behave in an offensive manner in public

– Serious Religious Vilification (under the Racial and Religious Tolerance Act 2001)

The men have been charged on summons and are expected to appear before Melbourne Magistrates Court on 6 March 2017.

Erikson has a previous (February 2014) criminal conviction for harassing a rabbi:

A man has avoided jail for abusing a Melbourne rabbi in a series of racially-motivated phone calls he tried to explain as a prank.

Neil Luke Erikson, 29, phoned Rabbi Dovid Gutnick of Melbourne City Synagogue on three occasions, telling him “Give me the money Jew or else I will get you” and abusing him for his faith.

He also spoke of circumcisions, blood money and Jewish sidelocks and told Rabbi Gutnick he knew his location and was coming to get him.

Magistrate Donna Bakos said she had no doubt Erikson’s calls were motivated by prejudice and found he had little remorse for his crime.

Shortis, who has recently left the UPF in order to join the Australia First Party, is currently engaged in a legal dispute with the Chief Commissioner of Police in Victoria after having had his gun licence revoked. Shortis subsequently won his appeal to the Firearms Appeals Committee (August), and while it’s unclear if the Commissioner will seek to have the decision reversed, it seems likely.

Today, Erikson, pretending to be a journalist, paid an unscheduled visit to St Vincent’s Care Services in Eltham. The facility is planning on housing a number of refugees from Iraq and Syria. Opponents of the plan have organised a protest at Jenny Macklin’s electoral office in Heidelberg on Saturday.

Among those promoting the rally in Heidelberg on Saturday is the Sydney-based ‘Party for Freedom’ (PFF). An unregistered but active micro-sect, the PFF regularly organises very small but vocal protests, generally directed at African migrants, Muslims, asylum seekers and refugees, leftists, equal marriage proponents, Chinese developers and so on. A handful of PFF members were present at the ‘True Blue Crew’ (TBC) rally in Melton in August, at the TBC/UPF rally in Melbourne in June, at the TBC/UPF rally in Coburg in May, and at the halal exhibition in Ascot Vale in April. This week the group, comprising a dozen or so members, staged a rally outside a Sydney court where three people are facing charges arising from an incident in January outside Black Rose infoshop in Newtown. Joining them was the Million Flag Patriot, who has now extended his control of Melton to the Sydney CBD.

The leader of the UPF, Blair Cottrell, was a special guest of Hack Live the other week. I won’t bother to assess the program in any great detail, but briefly:

a) It’s somewhat curious that while Cottrell — a neo-Nazi with a string of criminal convictions for violence — was considered a fit person to join a panel on the subject of ‘patriotism’, Zaky Mallah’s appearance on QandA in June 2015 triggered a media shitstorm. Indeed, on this matter, not a single peep has been made by the commentariat.

b) Another extra-special guest was a geek named ‘Damien Rieu’ (r/n: Damien Lefèvre) from fascist projekt ‘Génération Identitaire’, who joined in the chorus supporting a ban on Muslim migration to Australia. Note that for a very brief period Neil Erikson touted establishing an Australian equivalent before abandoning the idea and handballing responsibility for the stillborn group’s Facebook page over to another neo-Nazi. (The page is now known as ‘Australians Resistance Network’.)

c) At about 8:22, former soldier Andrew Fox makes reference to a YouTube comment made by Cottrell condoning violence against women. The comment Andrew refers to reads: ‘Women have manipulated me using sex and emotion; demoralization, and I have manipulated them using violence and terror. We use what we have to get what we want.’ Blair denies ever having written this, stating: ‘I never said that and I never wrote that. False statements are attributed to my person all the time.’

The statement in question has long-since been deleted from YouTube, presumably by Blair, along with dozens of other, similarly objectionable comments about women, Jews and the like — I published a number of these on my blog on July 27, 2015. The comment he claims not to have made was reported on October 17, 2015 in an article for Fairfax by Michael Bachelard and Luke McMahon, who were in a position at that time to independently verify this statement, along with the others included in their article.

With regards Blair’s criminal record, he provides his own account (as ‘Bruce’) in a segment of a documentary about youth incarcerated in Port Phillip prison, Stories From The Inside (2014). I transcribed his testimony in a blog post published on February 23, 2016. In it he describes how he abused steroids, stalked his former partner and her boyfriend, tried to kill him, set fire to their house, and eventually got arrested, convicted, and sent to prison. This was later reported by Geir O’Rourke and Angus Thompson for the Herald Sun (June 11, 2016). Of his offending, they write:

Speaking of neo-Nazis: ‘A white supremacist from Sydney’s south-west has been charged with setting fire to a Pentecostal church on the NSW mid-north coast. Ricky White appeared in Taree Local Court on Monday accused of deliberately starting the fire at the Destiny Church at 1:30am on Sunday’ (White supremacist charged over Taree Pentecostal church fire, Nick Ralston, The Sydney Morning Herald, September 19, 2016). Described as a ‘skinhead’ (sic) with Nazi tattoos, ‘It is understood that Mr White is also the head of the Wotansvolk fraternity in NSW and the second in charge nationally’. This may be so, but Ricky is also known as ‘SGT Hatchet’, the 2IC of tiny neo-Nazi groupuscule ‘Right Wing Resistance Australia’. A handful of its members have rocked up to various Reclaim Australia and patriotik rallies over the course of 2015/2016. 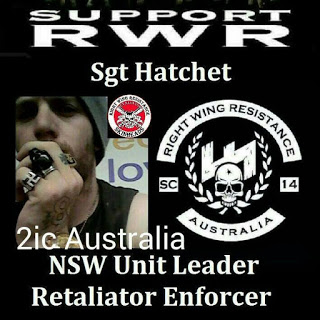 Local council elections are being held in Victoria on October 22. Among those vying for electoral glory are the Australia First Party, which is standing in Brimbank (John Carbonari, Harvester Ward) and Wyndham (Susan Jakobi, Harrison Ward). In Bendigo, Elise Chapman (Lockwood Ward) is running and, rather oddly, using a Chumbawamba song as her campaign anthem; further, ‘Chapman has been given extra time to plan her appeal against a councillor conduct panel ruling ordering her to apologise for an obscene tweet’, and is now expected at VCAT on November 14. Another anti-mosque campaigner, Julie Hoskin, is running in Whipstick Ward. Note that Hoskin led an unsuccessful (and rather xpnsv) legal challenge to the mosque proposal: ‘One of those who made the appeal, Julie Hoskin, said the legal process had so far … cost more than $200,000, which was mostly crowd-funded.’