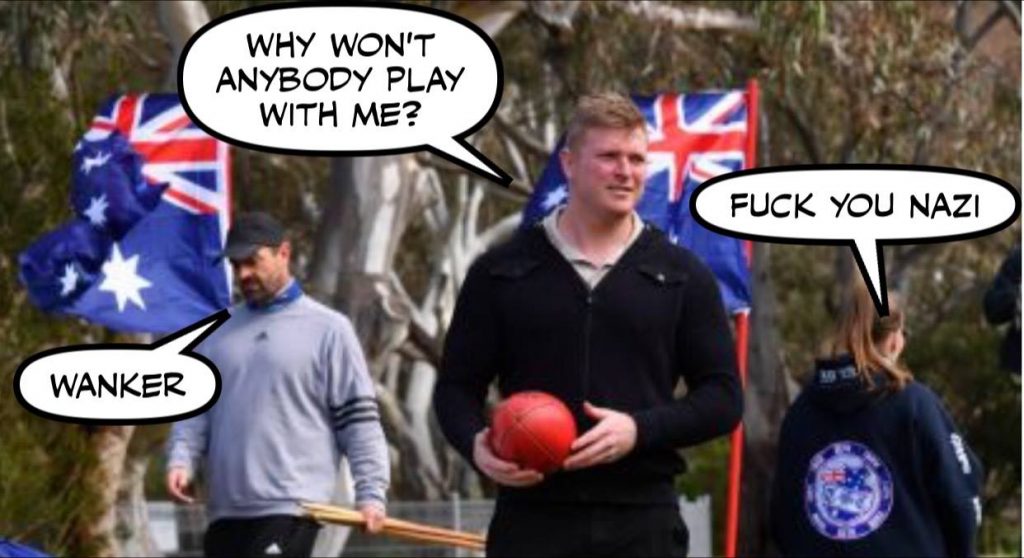 Around 100 or so people attended an anti-Muslim rally in Melton on Sunday, ostensibly in order to voice opposition to a stalled local housing development. (The developer, Rahber Developments, was wound up in May over a $400,000 debt to the ATO.) Meeting at Hannah Watts Park, those assembled listened to some speeches before marching to the council chambers (in the footage, the crowd looks closer to 200-strong), where they continued to shout slogans at an empty building.

Organised by the ‘True Blue Crew’ (TBC), the boys were joined on the day by the remains of the ‘United Patriots Front’ (UPF), a handful of (Sydney-based) Party for Freedom activists (among them Toby Cook and George Jameson), sometime Grand Poobah of the ‘Australian Defence League’ (ADL), Ralph ‘The Cancer’ Cerminara, and ‘Love Australia Or Leave’ Kim Vuga. Also making an appearance were a dozen or so ‘Soldiers of Odin’ (SOO).

The SOO were founded in Kemi, Finland in October 2015 by neo-Nazi activist Mika Ranta. The Soldiers appeal to racist thugs and boys who think Sons of Anarchy was a documentary, but by exploiting more generalised antipathy to Muslims and refugees, SOO helps bridge the gap between neo-Nazi activists and Western publics.

A true Viking, in May 2016 Ranta was given an 18-month suspended sentence for assault committed in June 2015: ‘Mika Ranta, 29, was sentenced for aggravated assault on one man and assault on a woman who tried to stop the attack, both of them Finns.’ (Antifa paid a visit to SOO’s clubhouse in Tampere, Finland a week later.) Ranta’s history as a neo-Nazi activist turned Nordic onanist is not unusual: AFA in Sweden have documented these links, which occasionally appear in media reportage, as has Anti-Racist Canada. 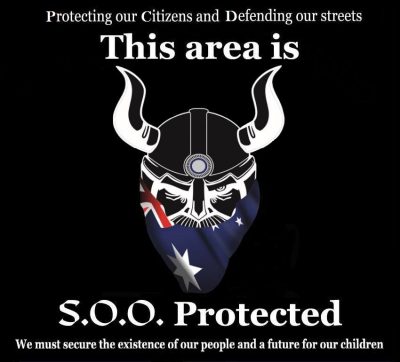 The Melbourne chapter of SOO announced its existence in March 2016 and, in the wake of its establishment in Finland just a few months prior, is one of scores of SOO grouplets to have sprung up across Europe and North America. A vigilante group whose 14 Words sneakily substitutes ‘our children’ for ‘white children’, in the last few months the Soldiers have been attending City Square in the Melbourne CBD, republishing dank right-wing memes, and otherwise carrying on like patriotik pork chops. In other words, they resemble any number of patriotik gangs that have emerged in Australia over the last 5-10 years.

Be that as it may, the potty-mouthed clash between members of SOO and TBC on Sunday appears to have revolved around the unwanted participation in the rally of its President, ‘Jay B Moore’. Moore is pictured below exchanging pleasantries with Steven Skinner, the person who may (or may not) have invited Moore and his Soldiers to Melton. Oddly, Skinner was named (seemingly wrongly) by Shermon Burgess as having had his house searched by police when they arrested Phill Galea.

Roundly abused by TBC, Moore was eventually forced to leave Melton and the rally with his tail between his legs. Exactly why the Soldiers were supine in the face of this attack upon their President is unknown (maybe they don’t like him that much either?), but their routing by the TBC may spell trouble in the future if — unlike many other such incidents — it doesn’t simply disappear down the memory hole. That may seem unlikely, but the case of Ralph Cerminara is illustrative. 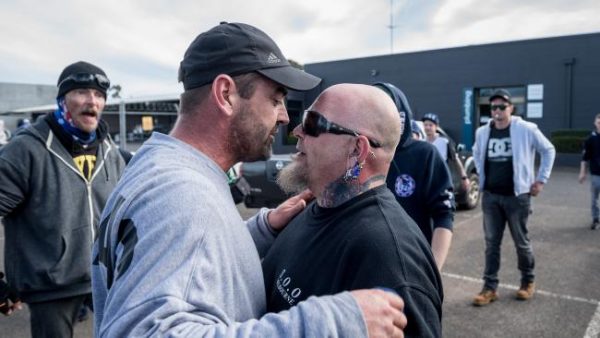 Denounced last year by UPF fuehrer Blair Cottrell as a ‘cancer’ and a ‘virus’ who will ‘infect and destroy everything he touches’, Cerminara was nonetheless once again embraced this year by the UPF as a comrade. This has upset some. Since being drummed out of/having left the UPF late last year, Burgess (‘The Great Aussie Patriot’) and Neil Erikson have denounced it as ‘Nazi’: a fact which apparently escaped them for the eight or nine months they spent as members of the group. Since then they’ve made a series of attempts to establish new patriotik (Facebook) groups, including ‘Generation Identity: Australia’, ‘UPF Originals’ and ‘Aussie Patriot Army’. Proclaimed just weeks ago, ‘Australian Settlers Rebellion’ is the latest in this series, which was intended to include Burgess, Erikson and … Ralph Cerminara. But that was yesterday. Today, Cerminara is once again back with the UPF and denouncing Burgess and Erikson as ‘dogs’ and ‘traitors’.

More generally, is it possible that the ‘patriots’ have now reached peak derp?

While ‘Reclaim Australia’ has more-or-less collapsed, the UPF’s mobilising capacity appears to exist in inverse proportion to its Facebook likes. Further, its attempt to establish a political party (‘Fortitude’) have ended in complete failure, with one-time Senate candidate Chris Shortis recently having decamped for the Australia First Party. In Melbourne, those left holding the bag are Cottrell, his preppy sidekick Thomas Sewell, and Kris0 Richardson, the founder of the ‘United Australian Front’ (UAF), a tiny grouplet which has since evolved into ‘Order 15/UAF’ while pumping out unabashed expressions of anti-Semitism, White supremacy and fascism. In Perth, the UPF lvl boss is Dennis Huts, whose own White supremacist and fascist convictions are also becoming increasingly frank.

With regards the TBC, it organised two public rallies prior to Sunday’s: a flag-waving parade in Melbourne on June 26 and an anti-left counter-rally in Coburg on May 28. (The TBC also took part in an anti-Muslim rally in Melton in November last year, organised under the auspices of ‘Reclaim Australia’.) The Coburg rally, which the UPF and a smattering of other neo-Nazis joined, attracted approximately 100 participants; the flag-waving ceremony (with the added participation of both the UPF and Rise Up Australia Party) attracted a similar number. So it would seem that there’s been no growth in either the TBC or UPF’s ability to draw a crowd. In fact, one could even speak of a rather precipitous decline since the Reclaim Australia rallies and anti-mosque rallies in Bendigo last year. Further, the TBC’s antics on Sunday will only underscore the fact that they’re basically a small group of frequently drunken, always bad-tempered, and invariably racist goons.

Oh, and to add some icing to the cake: Cerminara was allegedly given a Glasgow kiss by John Wilkinson (‘Farma John’).

5 Responses to #Melton : Soldiers of Odin ~versus~ True Blue Crew