The United Patriots Front (UPF) staged another dingbat stunt on Saturday night, on this occasion targeting Yarra councillor Stephen Jolly. The event the UPF attempted to gatecrash was titled ‘Re-elect Stephen Jolly – Vote socialist for Yarra!’ and was held at Collingwood Gallery in Smith Street, Collingwood; Jolly is hoping to be re-elected to council on October 21.

Like almost all their stunts, this one was filmed and the footage uploaded to the UPF Facebook page. In a subsequent video, UPF fuehrer Blair Cottrell states that the UPF had considered assembling 50 boys to go to the event and shut it down, but in the end decided on sending just 5 (including Cottrell and his sidekick, Thomas Sewell). As the few minutes of footage reveals, Cottrell & Co enter the campaign launch and start to shout questions at Jolly, who is one of several to ask the men to leave. Eventually, the UPF are forced from the venue, campaigners and supporters joined in their efforts removing the annoying gits by several workers from the CUB site, currently on strike/locked-out of their jobs in Abbotsford. Jolly has spoken in support of the strikers’ claims, which has attracted widespread support among unionists, including the AMWU.

In any case, this is not the first time that the UPF and other fascists have objected to Jolly’s presence on council. Indeed, about 70 or so went to the UPF’s first public action in Richmond last May. Cottrell even promised to physically remove Jolly from office if, for some mysterious reason, their protest rally failed to do so. Otherwise, the failed disruption is another moment in a long line of attention-seeking stunts, from roasting a pig outside ABC studios in Melbourne last June to beheading a dummy outside Bendigo council offices last October; attending MAC and 3CR the following month to April’s foolish banner drops at the footy. Before proclaiming himself an opponent of Black Lives Matter (July), Cottrell and the UPF tried jumping on the dairy farmers’ bandwagon — only to be told to bugger off.

Whatever the immediate impact, all these performances are really for the camera, producing footage intended to capture the attention of like-minded individuals, almost exclusively via Facebook. Thus the UPF page recently celebrated gaining 70,000 likes; IRL, it can (still) barely gather together 70 boys to act like fascist boofheads in public. Saturday’s stoopid is rather ironic, however, as the UPF made a whole lotta noise about the political blitzkrieg Fortitude would become, and yet in September 2016, where is Fortitude? Rather than speaking from the floor of the House, Fortitude is a shambles, its supposed Senatorial candidate, Chris Shortis, has decamped for the Australia First Party, and the UPF is reduced to whining disingenuously at the campaign launch for a goddamn Commie. As for unions, they’re generally regarded, alongside Muslims, as Teh Enimy — the one, partial exception being UPF lackey Kris0 Richardson, who’s proudly worn CFMEU gear while touting the virtues of a White Australia. Before joining the UPF, Kris0 established the ‘United Australian Front’ (UAF) website and Facebook page. In-between noting the UAF’s development (August 18, 2016) into a straightforwardly neo-Nazi project, the Facebook page has been closed re-badged as ‘Order 15’.

Serial pest Ralph Cerminara was in Melbourne a few weeks ago to join the True Blue Crew (TBC) at an anti-Muslim protest in Melton. When he returned to Sydney, Cerminara drunkenly declared himself to be the Grand Poobah of the TBC in Sydney — which came as a surprise to the TBC in Melbourne …

This week, Cerminara has stated that he’ll be attending the AMWU office in Sydney on the weekend, presumably to film himself muttering and cursing outside its closed doors. In addition to documenting the nefarious influence of unions on Australian politics, the valour thief has been keeping busy filming himself muttering and cursing at socialist students. See : Right wing bigots and extremists exposed 1, September 2, 2016; note also that WordPress has deleted Cerminara’s blog. 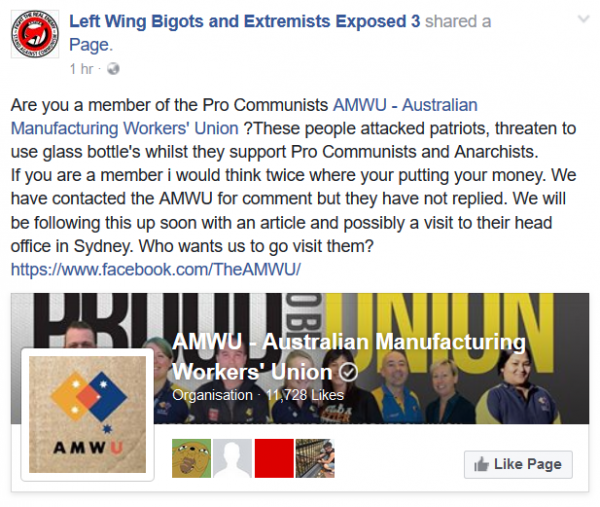 3) STRAYA First Goes To The Polls

Finally, the party has announced the formation of a United Nationalist Front or ‘Australian Coalition of Nationalists’, which at this point consists of the AFP, (whatever remains of the) Australian Protectionist Party and Nationalist Alternative, with the AFP Jnr. (AKA Eureka Youth League) and Hellenic Nationalists Australia Inc. (Greek fascists) nominated as ‘associates’ of the Coalition (as opposed to ‘partners’).