It’s next-to-impossible to keep up with the various shenanigans engaged in by ‘nationalists’ and ‘patriots’ Down Under — I’m considering updating A (very) brief guide to the contemporary Australian far right sometime soon, maybe — but a few things are worth taking note of.

1) The True Blue Crew (TBC) is holding another anti-Muslim rally in Melton on Sunday, August 28. (Their last rally took place in Melbourne on June 26.) They’ll be joined by the United Patriots Front (UPF) and presumably assorted other rightists (including Ralph Cerminara, a man Blair Cottrell, fuehrer of the UPF, has memorably described as a ‘cancer’). Amusingly, the TBC have co-opted Eric Bogle‘s ‘And the Band Played Walzing Matilda’ in order to promote their hate rally.

2) Not joining the TBC on August 28 will be Phill Galea. Galea’s arrest and prosecution for ‘terrorism’ has generated a lot of commentary, obviously, with much of it centred upon establishing who Galea is and what role he played in the far right movement. As noted previously, Galea did attend an abortive anti-immigrant and anti-Muslim rally back in April 2010, but has otherwise been an enthusiastic participant in a range of different groups (Australian Defence League/ADL, Reclaim Australia, Patriots Defence League of Australia/PDLA, TBC, UPF et. al.) and patriotik events. The reaction of his (former) friends to news of Galea’s arrest is captured by Peter Grace in one of his numerous videos documenting their antics:

Evan Smith provides some historical context in ‘Between the bomb and the ballot box’: the history of the far-right in Australia (The Guardian, August 16, 2016), while Martin McKenzie-Murray writes on How Reclaim Australia hid a ‘terrorist’ in The Saturday Paper (August 13, 2016).

See also : ASIO monitoring of right-wing extremists uncovered alleged plan to attack radical left, Nick McKenzie, Michael Bachelard, The Age, August 13, 2016. Note that the article contains a correction, viz, ‘An earlier version of this story quoted a person purporting to be Ralph Cerminara. Fairfax now accepts this was not Mr Cerminara, and that Mr Cerminara does not subscribe to the beliefs expressed. Fairfax apologises for the error.’ Speaking of Cerminara …

3) Shermon Burgess (‘The Great Aussie Patriot’) recently announced the launch of yet another Facebook project: Australian Settlers Rebellion (ARSE). At this stage it consists of Burgess, Neil Erikson, UPF leader (?) Scott Moerland and (possibly) Cerminara. ARSE takes the place of a series of Facebook projects established by Burgess and Erikson since they left the UPF and denounced the group as ‘Nazis’. Other stillborn projects include Generation Identity Australia (now known as Australians Resistance Network), Aussie Patriot Army (deceased) and United Patriots Front – Originals (defunct).

The departure of Burgess and Erikson from the UPF, and their declaration that the ‘patriots’ they’d been working closely with for more than six months were — shock! horror! — actually neo-Nazis, has naturally produced some bad blood. (This is in addition to the fact that Erikson now has very few allies among the far right in Melbourne.) A few days ago, this blood appears to have boiled up in the person of UPF lackey Linden Watson. Peter Grace again:

4) The UPF appears to have lost the support of Chris ‘The United Nations is attempting install the Pope as leader of a new world government’ Shortis, who has now openly embraced ‘national socialism’ and anti-Semitic conspiracy theories, and gravitated towards the Australia First Party. ‘Last Thursday’, Blair Cottrell’s sidekick Thomas Sewell expressed his support for fascism in a post which was soon deleted from the UPF page. 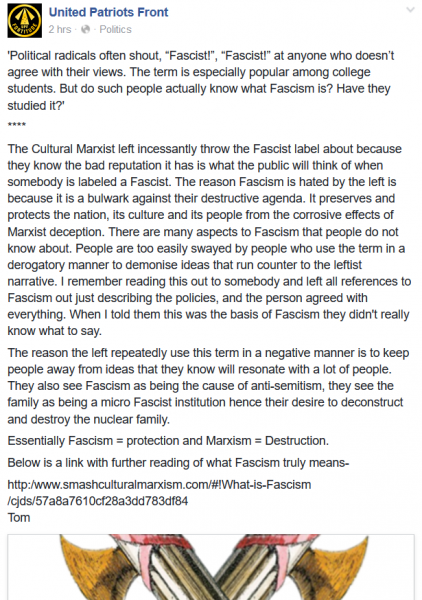 Otherwise, The Boys continue to hint at the fact that The Jew is responsible for All The (Bad) Things; a perspective expressed frankly in their internal discussions alongside, crucially, a recognition of the fact that being honest about their beliefs risks losing the support of that fraction of ‘patriots’ not down with neo-Nazism. It may also be read as evidence of the ideological incoherence of the milieu, and the fact that broadly speaking, it comprises anti-Semites, white nationalists, national socialists and fascists as well as Islamophobes: whether one aspect or the other is emphasised is largely a tactical question. The case of UPF leader Kriso Richardson (United Australian Front: UAF) underlines this fact.

5) The UAF was established in late 2014, ie, prior to the emergence of both Reclaim Australia and the UPF. While men wearing UAF merch made their debut at the anti-leftist rally in Richmond in May, 2015, it is now known as Order 15/UAF, and is open about its commitment to white nationalist and fascist doctrines.

6) The UPF and the TBC held a small counter-rally in Perth on August 13, and again on July 30, The Boys on both these occasions expressing support for The Mother Potato, Pauline Hanson. In Melbourne on July 16, the UPF attempted to mount a very small counter-protest. Wearing masks and holding a ‘Blue Lives Matter’, the boys (around 10–15 in total) were told to shoo by police — and did. Just a handful of neo-Nazis stuck around to heckle the ‘Black Lives Matter’ protest later in the day, which attracted thousands.

7) Nick Folkes‬ and his micro-Party for Freedom staged a successful media stunt on the weekend, disrupting a church service in ‪Gosford‬. The event succeeded in Folkes being invited to address radio and television audiences — even if it also earned him a rebuke from Andrew Bolt and The Mother Potato herself expressed qualms. In any case, this is not the first time racist meatheads have targeted churches for their commitment to human rights, the PFF’s antics recalling an earlier period in which right-wing radicals harassed ‘progressive’ church-goers. Dorothy McRae-McMahon:

In the autumn of 1986, six men marched into the Uniting Church in Pitt Street during my morning service. They marched in fast, carrying the Eureka flag. They came down the centre aisle, put a pamphlet on the lectern and handed out various leaflets before marching out again.

That was the beginning. From that day on National Action launched a sustained campaign of harassment against me because of my involvement in the anti-apartheid movement and other anti-racism activities. It went on for two years.

Initially, most of the harassment was aimed at frightening me and trying to bring down my career. They sent out pamphlets not just to my parish but around many of the parishes of the Uniting Church, claiming some pretty amazing things about my sex life. It would have been exciting indeed if I’d been doing the things they said I was doing! One particularly unpleasant pamphlet they put together was called ‘Sodomy and Gonorrhoea in the Uniting Church’. It was a classic Nazi document, mainly homophobic and racist, and it was clearly an attempt to end my ministry.

The church authorities firmly supported me and there came a time when it would have been very difficult if they hadn’t done so. The parishioners at the Pitt Street church were also supportive to a person. Members of National Action had clearly been going through the church’s rubbish bins for some time and they’d got hold of discarded documents including part of our mailing list. They started phoning up some of our people and saying: ‘We know where you live and we know the names of your children and if you don’t leave the Pitt Street church we’ll come and do something to your children’. We lost nobody. In fact we gained people in that period.

By 1986, the Uniting Church in Pitt Street had clearly identified itself with the anti-apartheid cause. Archbishop Desmond Tutu had spoken there on two momentous occasions. It’s a church that seats 2000 people and we’d never seen it full like it was on both those days. It was a great thing for us to facilitate the gathering of so many anti-apartheid activists. We also had an anti-racist graffiti team which went around the city painting over slogans that said things like ‘Kill an Asian a day’. I was the only church employee in the regular team that went out, the rest were all parishioners from the Pitt Street church. On one occasion we approached the railway authorities asking them to wipe out slogans in the Stanmore railway tunnel. Six weeks went by without a response, so we went and did it ourselves. We got caught and were arrested for being on railway property.

I suspect the publicity we got after the graffiti incident was a triggering point for National Action’s campaign. Apart from the pamphlets there was nuisance-type harassment. Week after week they poured sump oil and printing toner across the front steps of the church. We sometimes had to pay for it to be cleaned up because it would soak into the sandstone. Their campaign gradually escalated until it became quite frightening. I was living alone at the time and they’d phone me in the middle of the night and make death threats and say various other horrible things. Bags of faeces and vomit were thrown all over the front steps of my house and stuffed in the letter box or in the windows. One time they graffitied my front fence. If I left the phone off the hook or later when I got a silent number they would come around and knock on my door in the middle of the night.

I was frightened during these incidents but I also felt supported by many people around me, not only in the church but outside as well. I have to say my spirituality sustained me too. They never gained power over me, nor any of us in the parish. After they’d been around I could always ring up somebody from the parish. No matter what time of the night it was, even at three o’clock in the morning, somebody would always hop in their car and come around to clean up the mess, sit down, have a cup of coffee and debrief me.

We eventually decided to go public about National Action’s campaign. We’d been reluctant to do so because we didn’t want to give them any publicity. But then it went on and on and they’d been harassing the parish for some eight months, we thought: ‘Well the Australian community has a right to know what’s going on in its midst.’ We were also getting very angry by then.

We took the initiative and wrote an open letter to the Sydney Morning Herald. The media took an immediate interest. We discovered lots of other people were being attacked by racist groups. Often they were individuals who had no support group or members of the Jewish community. Or people who worked for the NSW Ethnic Affairs Commission, even some journalists. We then formed a loose-knit anti-racism coalition and started lobbying for government and police action.

We took a deputation to the NSW Police Minister. He was outrageous. He was absolutely outrageous. He told us that things like a few bricks through windows were par for the course in a diverse sort of community where people have different opinions. We came out of the meeting stunned by his attitude. We didn’t know what to do next because we really needed his support. What was even more surprising was that his press secretary and advisers later put out a press release which said the Minister was really troubled by the racist attacks and they had to stop. That was very different from what he said to us. In the end the Sydney Morning Herald ran a column which gave our account of that meeting with him.

In all this, more and more anti-racism groups came together in support of each other. We had very moving experiences. One time people gathered on the front steps of the Pitt Street church with placards saying ‘If the police won’t defend this church – we will’. They were people who wouldn’t normally come near a church …

8) Finally, ‘Jews against fascism’ have a Facebook page and Jason Wilson writes Turnbull wants to diagnose rightwing populism? He should look to his own party (The Guardian, August 18, 2016).