On Sunday, five members of the fascist groupuscule the ‘United Patriots Front’ (UPF) — Blair Cottrell, Neil Erikson, Chris Shortis, Linden Watson and Andrew Wallis — paid a visit to the Melbourne Anarchist Club (MAC) in Northcote and then to community radio station 3CR in Collingwood. Both incidents were filmed by UPF member (and convicted anti-Semite) Erikson, uploaded to the UPF’s Facebook page, and presented as being evidence of the UPF’s ability and willingness to take the fight up to its political opponents; a long list which includes Muslims, anti-racists, and all those who don’t share their paranoias or rejection of multiculturalism.

This bizarre and disturbing behaviour by the UPF confirms their basic fascist character and suggests that, following two relatively large rallies in Bendigo, they’re feeling quite confident and, seemingly, intent on provoking some kind of physical confrontation with ‘the left’ in Melbourne. Certainly, they are very angry and upset that 3CR has the temerity to allow me to occasionally broadcast anti-fascist news and views … but I suspect that, in picking on the community broadcaster, they’ve simply succeeded in antagonising a much broader range of groups and projects.

While 3CR has yet to formally respond to the UPF’s brief occupation, the MAC has called on friends, comrades and supporters to attend an Open Day at the MAC this Sunday, November 8, from midday ’til close. Hopefully, a good number of local anarchists and other anti-fascists will attend. 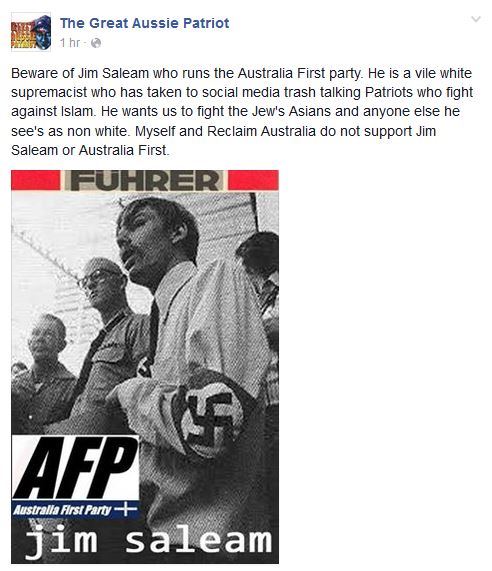 Having recently junked the UPF (again), Shermon Burgess (‘The Great Aussie Patriot’) has been attempting to rehabilitate his public image somewhat by angrily denouncing ‘nazis’, which now extends from Blair Cottrell’s mates in Nationalist Alternative to Dr Jim Saleam’s Australia First Party. Joining him in this denunciation is Nick Folkes of the Party for Freedom: the dynamic duo is busy promoting a happy 10th birthday party for The Cronulla Riots. Oddly, while Burgess has suddenly come to the conclusion that Saleam is an horrible nazi, it was only a few months ago (June 28) that his mate Erikson published a video interview with Saleam regarding his analysis of anti-racist and anti-fascist activists (“Dr. Jim Saleam (AFP) Exposes Left Wing Terrorists.”) on the UPF Facebook page.

Which at the time produced not a whimper from ‘The Great Aussie Patriot’.

Lawful advocacy, protest and dissent are an inherent part of Australia’s political and social culture. Most protests are peaceful, and there is little public support for the use of violent or destructive protest tactics. During 2014–15 protests in Australia were mostly peaceful. When violence occurred, it was typically not premeditated and it took place between groups with opposing views on emotive issues. Violence was also used against police attempting to maintain order.

There was increased participation in the activities of Australia-based anti-Islam groups; mostly this was online activity but ‘real world’ events attracted increased numbers. The conflict in Syria and Iraq, and widespread mainstream and social media coverage of the conflict—in particular, graphic reports of egregious acts—provided a ready stream of material used by anti-Islam activists as evidence that Islam is not compatible with Australian values or the Australian way of life. Anti-Islam groups whose activities were previously mostly limited to online posts and occasional inflammatory publicity stunts began to attract increased numbers to real-world events, such as the Reclaim Australia rallies and the Stop the Mosque protests. The reporting period saw a number of well-attended, coordinated Australia-wide protests with an overt anti-Islam and anti-immigration message; these protests attracted large numbers of supporters and counter-protesters.

Small-scale violence occurred between opposing protesters at the Reclaim Australia rallies in Melbourne in April 2015. Reclaim Australia rallies will continue to be held throughout the next financial year and, due to their potential for violence, will remain of concern. While anti-Islam numbers increased, there was a concurrent increase in counter-protests on platforms of social inclusion, anti-racism and anti-fascism.

In January 2015, members of Sydney’s Muslim community and their supporters gathered in a peaceful ‘We will not abandon our Prophet’ rally organised by Hizb ut-Tahrir, at Sydney’s Lakemba train station. The event was held in response to perceptions of anti-Islam sentiment following the terrorist attack on the Charlie Hebdo office in Paris. While the event was vocal, it passed without major incident.

Environmental issues, refugee and Indigenous advocacy, animal rights and anti-government policy protests attracted the most significant numbers to protests in 2014–15. While some capital city protests on these issues attracted large, vociferous crowds, most concluded without incident and complied with protest preconditions and directions of police.

Reclaim Australia (RA) will be holding a further series of rallies across the country on Sunday, November 22. The UPF has declared that it too will be attending, and acting as the fascist vanguard of RA in Perth.

The rallies will be the subject of counter-protests.

CANBERRA
Canberra Rally Against Racism: No to Reclaim Australia, No to Islamophobia! (Canberra Anti-Racism Network) 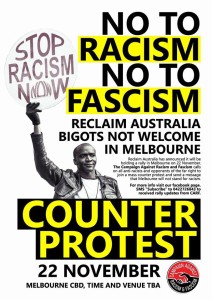 MELBOURNE
No to Racism, No to Fascism: Stop Reclaim Australia (Campaign Against Racism & Fascism)
RALLY AGAINST RACISM – Stop ‘Reclaim Australia’ – Melbourne (No Room For Racism)

PERTH
Reclaim Australia – No Way! (United Against Bigotry and Racism) 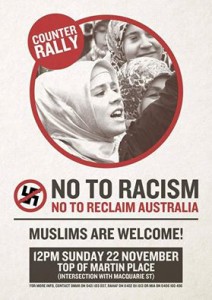 I’ll add other locations as I become aware of them.

Finally, the final chapter in Alexander Reid-Ross and Joshua Stephens’ exposé on South African writer Michael Schmidt has been published (though the fallout has barely begun I suspect).