“Michael Schmidt is a white nationalist trying to infiltrate the anarchist movement.”

Anarchist publisher + distributor AK Press has issued a public statement on the subject of Michael Schmidt, among other things the co-author of Black Flame: The Revolutionary Class Politics of Anarchism and Syndicalism (AK Press, 2009). According to AK Press, Schmidt, while posing as a revolutionary anarchist, is in reality “an undercover fascist” and “a white nationalist trying to infiltrate the anarchist movement.” 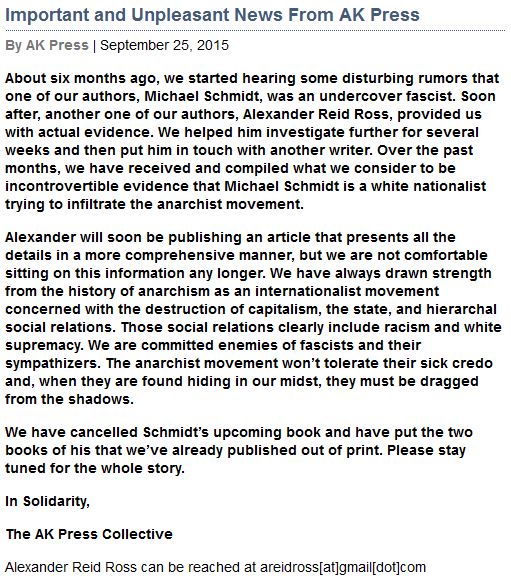 As I see it, until such time as AK Press publishes its evidence — and Schmidt is given an opportunity to respond — it’s very difficult, if not impossible, to make a reasonable assessment of the situation. Nevertheless, some discussion has floated the possibility that Schmidt was moonlighting as a ‘national anarchist’. If so, this would be a case of ‘deep entrism’.

In any event, in Australia at least — and despite the best efforts of its chief promoter, Sydney-based businessman Welf Herfurth — ‘national anarchism’ appears to have been a largely abortive political project. Thus, other than arrange a handful of media stunts (see : When White nationalists attack! New Right @ Gaza solidarity rally, Sydney, November 24, December 7, 2012), ‘national anarchism’ has failed to establish itself as even a minor grouping on the far right. Indeed, one of Herfurth’s former acolytes, Scott Harrison, after taking a detour thru Creativity, eventually wound up as a Young Liberal (much to former Victorian premier Dennis Napthine’s embarrassment).

Obviously, there’s much more to come, but in the meantime note that ‘national anarchists’ are organising a conference to take place somewhere in Europe in 2017, at which Herfurth along with Troy Southgate, Keith Preston et al are scheduled to speak. 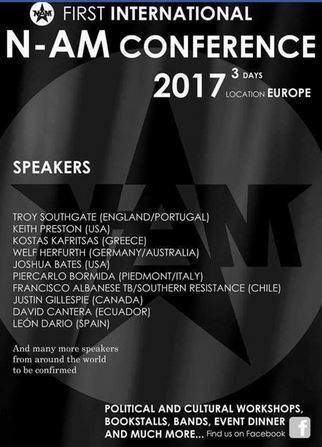 I live in Melbourne, Australia. I like anarchy. I don't like nazis. I enjoy eating pizza and drinking beer. I barrack for the greatest football team on Earth: Collingwood Magpies. The 2021 premiership's a cakewalk for the good old Collingwood.
View all posts by @ndy →
This entry was posted in !nataS, Anarchism, Anti-fascism, State / Politics and tagged AK Press, Black Flame, Co-opting the Counter Culture: Troy Southgate and the National Revolutionary Faction, Keith Preston, Michael Schmidt, national anarchism, Troy Southgate, Welf Herfurth. Bookmark the permalink.

13 Responses to “Michael Schmidt is a white nationalist trying to infiltrate the anarchist movement.”