On Scott Harrison’s transformation from neo-Nazi to Young Liberal

Update : According to fellow Creatard Colin Campbell, Scott did not leave the Creativity religion until 2013, ie, the same year he joined the Young Liberals. 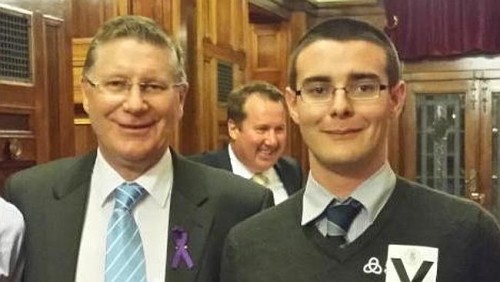 In a story reminiscent of the hullabaloo that followed the exposure of Labor candidate Peter Watson’s history as a neo-Nazi activist in 2012, a story appeared in Fairfax today concerning Young Liberal Scott Harrison, a man with a similarly colourful history. (See : Liberal Party campaigner Scott Harrison a former neo-Nazi, Nick McKenzie, Richard Baker and Richard Willingham, The Age, November 12, 2014.) What follows is a brief examination of Scott’s political evolution.

To begin with, the photograph which accompanies the story is of a very young Scott, but his commitment to neo-Nazism extended into more recent years via his involvement, inter alia, with neo-Nazi skinhead gangs Blood & Honour and the Hammerskins. This photograph is of an older Scott in attendance at the annual Ian Stuart Donaldson memorial gig in Melbourne in 2010:

To start at the beginning:

In late 2005/early 2006, inspired by Cronulla (and the gift of a copy of the film Romper Stomper), Scott initially joined both Stormfront and a short-lived group called WAFF, or ‘Worldwide Aryan Freedom Fighters’, one of countless far-right projects that emerge and then, just as frequently, disappear. Several years later, as well as having become a Creatard (a follower of the White supremacist Creativity religion), Scott also fancied himself something of an ‘anarchist’ — a ‘national anarchist’ — under the stewardship of Sydney-based fascist Welf Herfurth, designated by the SPLC as one of the leaders of the neo-Nazi Volksfront gang. During this period, Scott used the handle ‘anarchonation’.

While at high school, Scott described himself as a racial soldier, claimed to have been in “race wars” at school, and to have bashed a “Red”. Much of the material Scott produced during this period — ie, before he became a ‘Reverend’ in the Creativity Alliance/Movement — has since disappeared online (and/or I couldn’t be bothered tracking it down), but the following are some of the virtual locations he used to propagate his views:

Scott also had accounts on rahowa.net (‘rahowa’ = ‘RAcial HOly WAr”) and on Stormfront, where he employed several handles, initially ‘Eratic Industries’ (join date: January 2005; 80+ posts). On ‘Eratic Industries’, Scott wrote that: “Eratic Industries was the name of an underground freedom of speech outfit I ran at school, we provided information on making all sorts of things. When I first joined Stormfront I was not a true white nationalist yet, just experimenting so I used Eratic Industries as it was what I was using everywhere else on the net.” Here he describes his plans for the future:

After abandoning this handle, Scott adopted ‘NoCrusties’ in November 2006, under which title he posted over 500 comments on SF. It was as ‘NoCrusties’ that Scott made some highly objectionable comments, including one in which he joked about photos published in 2007 of Nazi concentration camp guards thusly: “They are celebrating the girls graduation from Jewish strangulation school? Haha, jokes, haha!”. Finally, Scott employed the handle ‘HatemongerCA’ (join date: February 2009; 300+ posts, last entry late 2011). The following blog post on SF outlines Scott’s racial philosophy in some detail:

We have come to hold these views by observing the Eternal Laws of Nature, by studying History, and by using the Logic and Common Sense everyone is born with: the highest Law of Nature is the survival of one’s own kind; history has shown us that the White Race is responsible for all that which we call progress on this earth; and that it is therefore logical and sensible to place supreme importance upon Race and to reject all ideas which fail to do so. No species on earth besides the currently misguided White people willingly aid other species at its own expense.

Our people have faced threats throughout history, but never before have our people faced as grave a threat as it is facing today. Today, our people’s very continued biological existence on this planet is in doubt. In 1920 for example, one out of every three people on this planet were White. Today, only one out of every twelve are White. If present trends continue, one can only imagine what the complexion of the world will be like in another one hundred years.

How did this calamity come about? It came about because of our people’s skewed thinking. Our people have thus far been concerned with every issue besides the issue of their own survival. We have subsidized those not of our own kind at our expense, causing their numbers to soar, while at the same time, White people have scaled back the size of their families, either out of selfishness or because of low-paying salaries and exorbitant taxes. We have divided ourselves into all kinds of organizations and causes, none of whom address the most basic issue: Will White children have a future? With CREATIVITY, this is the issue, and all other issues revolve around it.

Our people everywhere are beginning to embrace the dynamic and inspiring creed and program of CREATIVITY. White people everywhere are beginning to put aside their past differences and divisions and are coming together as one people for their best interests. More and more of our people are beginning to realize that if White people do not look out for their own future, no other people will. As a result, our churches are sprouting up all over the world, our ministers preaching the word of White unity and our members zealously spreading the word to you, our fellow White people. We hope that after reading this, you will decide to obtain more information, will consequently decide to become a Creator, and will decide to join us in this historic struggle.

I call upon you to join with us today, to do what is right for your family and for your extended family – your Race. If you act, you will be ensuring a future of beauty and happiness; if you do not, there will be a future of darkness and sadness. We have the capability to make sure that every child has a smile on his or her face.

Let’s not miss the moment. Generations yet unborn are counting on you.

Precisely when Scott decided to abandon fascism and white supremacy (if indeed he did) is unclear. Thus, all the items on the creativityvic site are now credited to ‘Rev C Magyar’. An examination of the site’s archive reveals that the same articles were previously credited to ‘Rev Scott Harrison’; the *latest* entry on the creativityvic site is dated August 26, 2012, ie, *less than one year* before Scott says he joined the Young Liberals (July 2013). His last posts on SF date from October November 2011.

If Scott has indeed junked his previous political commitments that’s a good thing. But until today — perhaps — this remained an open question. In any event, Scott’s case does raise some other interesting questions regarding what, if any, vetting processes apply to those seeking to become leading Young Liberals, and why Scott’s not-inconsiderable activism on behalf of fascism and white supremacy was apparently not discovered by those responsible for overseeing such processes. Of course, it could also be the case that Scott has not fundamentally shifted in his political perspective and simply decided that the Young Liberals is/was a more appropriate vehicle for promoting reactionary politics. Who knows?

I live in Melbourne, Australia. I like anarchy. I don't like nazis. I enjoy eating pizza and drinking beer. I barrack for the greatest football team on Earth: Collingwood Magpies. The 2023 premiership's a cakewalk for the good old Collingwood.
View all posts by @ndy →
This entry was posted in Anti-fascism, History, Media, State / Politics, Student movement and tagged #auspol, #vicpol, Creatards, Creativity Alliance, Creativity Movement, Dennis Napthine, Scott Harrison, Young Liberals. Bookmark the permalink.