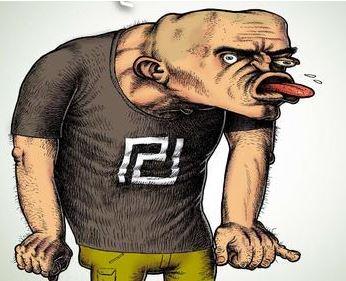 In news sure to bring tears to local fascists, Golden Dawn (GD) Australia has announced that the planned tour by two Golden Dawn luminaries — MEP and former NATO general Georgios Epitideios and party organiser Michalis Giannagkonas — has been cancelled. Iggy Gavrilidis, the spokesperson for GD Australia, blames the failed tour on being given the bureaucratic run-around by authorities — a situation presumably created by pressure from below. In other words, in this instance, the government is spared having to actually refuse a visa to the MEP while at the same time ensuring the tour doesn’t go ahead. Of course, that doesn’t mean Iggy & Co won’t try and organise a tour sometime next year …

Best of luck with that fellas. LOL.

Scott Harrison : From neo-Nazi to Young Liberal to …

The Liberals enjoyed a minor scandal this week when the Vice President of the Deakin University Young Liberals, Scott Harrison, was exposed as a (former?) neo-Nazi and Reverend in the White supremacist kvlt Creativity (Alliance). Scott took the opportunity to claim that he now rejects neo-Nazi ideology: “I completely distance myself from my past ideology. I now realise how insane it was. I now believe in racial equality and gay marriage.” The genuineness of his response is undermined by the fact that he also claims to have abandoned his beliefs in 2010 whereas he continued to spout anti-Semitic and White supremacist beliefs as an active kvlt member up until at least 2012 and maintained his membership until 2013, ie, the same year he joined the Young Liberals. (See also : Liberal candidate Aaron Lane quits over Twitter comments, Richard Willingham and Deborah Gough, The Age, August 2, 2014.)

Today Australia First Party (AFP) leader Dr James Saleam will be losing in the Marrickville local council election (as will Joe Ferguson in Newcastle). AFP is hoping John Carbonari’s wig will win a few votes when he and it contest the seat of Bayswater in the upcoming Victorian state election. Sadly, One Nation doesn’t appear to be throwing its own frayed hat into the ring, while elsewhere on the right most candidates appear to be emerging from various Christian parties (Australian Christians, Democratic Labor Party, Rise Up Australia). See also : Victorian state election: Denis Napthine puts Rise Up ahead of Greens, Richard Willingham and Adam Carey, The Age, November 13, 2014.

In other schnews, Saleam’s BFF Ross ‘The Skull’ May has appeared in a new video produced by Sydney-based nazi grouplet Squadron 88. You may remember Squadron 88 from such stories as stuffing postboxes with badly-written anti-Semitic tracts. Anyway, it’s a pretty entertaining video (if you enjoy watching old nazis carrying on like a pork chop). ‘The Skull’ is a regular at AFP and other fascist events around Sydney, most recently supporting the party’s failed campaign to prevent the construction of a mosque in Penrith — despite having the backing of former AFP member and Penrith councillor Maurice Girotto. See : Protest falls on deaf ears as Penrith Council votes in favour of mosque, Ian Paterson, Penrith Press, November 11, 2014.