For reasons best known to itself, Bernards Magic Shop in the City is circulating a Q Society petition:

To the Honourable Speaker and Members of the House of Representatives

This petition draws the attention of the House to a business model developed by Islamic organisation to impose ‘Halal Certification Schemes’ on all Australians.

We support the freedom to eat according to religious customs. Most food is naturally permissible for Muslims and requires no additional certification. We are concerned about the disproportional growth of halal-certified products and services and the extra cost imposed on consumers. We are further concerned about gender and religious discrimination sanctioned by the Australian Quarantine Inspection Service, so Australian abattoirs comply with Islamic sharia law.

We ask the House to amend the Corporations Act 2001 to ensure that:

1. Products and services from halal-certified supplier are clearly labelled as ‘halal certified’ to ensure consumers can make a conscious decision.
2. Any extra cost and fees associated with Islamic halal certification are born by Islamic community organisations according to the ‘user pays’ principle.
3. No discrimination on gender or religious grounds is practiced in Australian workplaces, unless the employer is a recognised religious organisation.

Animals in Australia (with exception of pigs) are now mostly slaughtered by Muslim males in accordance with Islamic sharia law. It is practically impossible to buy non-halal chicken, beef or lamb. All major players in our supply chains are now paying Islamic organisations.

In the discussion on their Facebook page, Bernards states (inter alia): 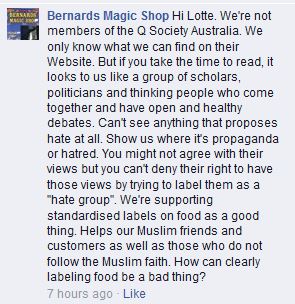 Which suggests to me that Bernards is either a little naïve or perhaps disingenuous.

I live in Melbourne, Australia. I like anarchy. I don't like nazis. I enjoy eating pizza and drinking beer. I barrack for the greatest football team on Earth: Collingwood Magpies. The 2020 premiership's a cakewalk for the good old Collingwood.
View all posts by @ndy →
This entry was posted in !nataS, Media, State / Politics, That's Capitalism! and tagged Bernards Magic Shop, Q Society. Bookmark the permalink.