Over the last few months, Shermon Burgess — a/k/a ‘The Great Aussie Patriot’ — has begun to increasingly indulge in the perpetuation of a range of radical right-wing memes, not only about Islam and the left but multiculturalism, the United Nations (Agenda 21) and allied topics. One of my favourite memes is the one about Trotsky inventing the term ‘racist’. 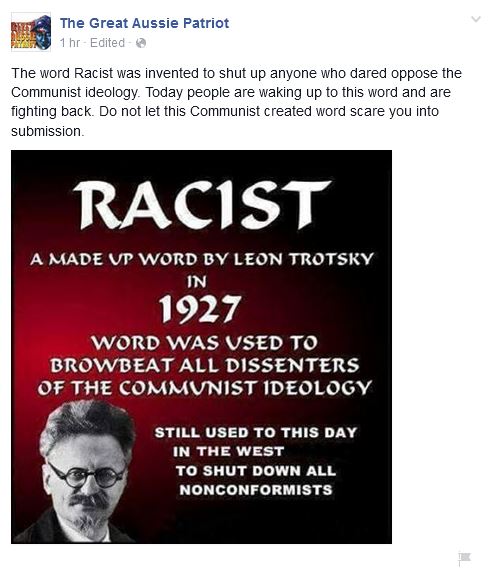 [Source : The ‘Trotsky Invented The Concept Of Racism’ Myth, One Million United, January 1, 2010.]

Nick Griffin [BNP leader]: No it’s because people like the BBC have demonised the word racist and have set about demonising us.
Gavin Esler: Demonised the word racist? There is somehow a good side to racism is there?
Nick Griffin: Ah, it’s a canned term. There’s no good side to racism. If you mean hating people, you’re doing it now. You’re not letting me explain for a start. Racism was a concept invented by Leon Trotsky, a Communist mass-murderer to demonise his opponents and stop people talking about certain issues.

The concept of scientific racial supremacy was invented by Gobineau before Trotsky was born. Trotsky used the term racism to describe it, but racism only became an epithet to describe racial prejudice after he died.

This is a very popular myth with neo-Nazis and other White Nationalists, who especially enjoy pointing out that Trotsky was born into a Jewish family. According to them a Judeo-Communist conspiracy is trying to destroy Western civilization and the white race, etc, etc, etc and invented that word to silence people… yawn. Funny that Nick Griffin should use a staple argument used by anti-Semites isn’t it? It can be found all over the Internet and Griffin was obviously defending his right to be racist by the looks of things. His argument, which is the general one, is that the concept of racism was invented by a Communist to stifle opposition and freedom of speech. But where did Trotsky use the word? There are two alleged sources, the first one is ‘What Is National Socialism?’, published on June 10th 1933.

The theory of race, specially created, it seems, for some pretentious self-educated individual seeking a universal key to all the secrets of life, appears particularly melancholy in the light of the history of ideas. In order to create the religion of pure German blood, Hitler was obliged to borrow at second hand the ideas of racism from a Frenchman, Count Gobineau, a diplomat and a literary dilettante. Hitler found the political methodology ready-made in Italy, where Mussolini had borrowed largely from the Marxist theory of the class struggle. Marxism itself is the fruit of union among German philosophy, French history, and British economics. To investigate retrospectively the genealogy of ideas, even those most reactionary and muddleheaded, is to leave not a trace of racism standing.

On the plane of politics, racism is a vapid and bombastic variety of chauvinism in alliance with phrenology. As the ruined nobility sought solace in the gentility of its blood, so the pauperized petty bourgeoisie befuddles itself with fairy tales concerning the special superiorities of its race. Worthy of attention is the fact that the leaders of National Socialism are not native Germans but interlopers from Austria, like Hitler himself, from the former Baltic provinces of the Czar’s empire, like Rosenberg; and from colonial countries, like Hess, who is Hitler’s present alternate for the party leadership. A barbarous din of nationalisms on the frontiers of civilization was required in order to instill into its ‘leaders’ those ideas which later found response in the hearts of the most barbarous classes in Germany.

… In the sphere of modern economy, international in its ties and anonymous in its methods, the principle of race seems unearthed from a medieval graveyard. The Nazis set out with concessions beforehand; the purity of race, which must be certified in the kingdom of the spirit by a passport must be demonstrated in the sphere of economy chiefly by efficiency. Under contemporary conditions this means competitive capacity. Through the back door, racism returns to economic liberalism, freed from political liberties.

The second reference is from The History of the Russian Revolution, written in 1930 and translated and published in 1932. In here the word ‘racism’ does not appear, but ‘racist’ does.

Slavophilism, the messianism of backwardness, has based its philosophy upon the assumption that the Russian people and their church are democratic through and through, whereas official Russia is a German bureaucracy imposed upon them by Peter the Great. Marx remarked upon this theme: ‘In the same way the Teutonic jackasses blamed the despotism of Frederick the Second upon the French, as though backward slaves were not always in need of civilised slaves to train them.’ This brief comment completely finishes off not only the old philosophy of the Slavophiles, but also the latest revelations of the ‘Racists’.

So what did Trotsky mean by racism and racist? In the first quotation Trotsky says, “In order to create the religion of pure German blood, Hitler was obliged to borrow at second hand the ideas of from a Frenchman, Count Gobineau”. Who was Gobineau and what were his ideas? Arthur de Gobineau (1816 – 1882) wrote a book entitled An Essay on the Inequality of the Human Races in which he proposes that the ‘white race’ is superior and that the Aryan branch of it in Northern Europe was the ‘Master Race’. He also believed race-mixing led to chaos. I bet you thought the Nazis invented all that didn’t you? Anyway, so Trotsky said Hitler created a ideology based on a pure German race and nicked ideas from Gobineau… err, well he did! Trotsky said the Nazis were practising an ideology based on race, which goes without saying is true. He was not trying to stop the Nazis talking about certain issues, he was criticising the concept of their race-based ideology. So if Griffin disagrees with Trotsky presumably he believes the Nazis didn’t have a racial ideology, or Trotsky was wrong to even mention it.

In the second quotation Trotsky says the Slavophiles believe Russians to be inherently democratic, an idea that he rubbishes. He says that also finishes off the claims of the racists. But again he is attacking the idea of racial differences not accusing the Slavophiles of saying racist things.

In both cases Trotsky is commenting on an existing ideology of racial superiority/difference, so he therefore did not invent the concept of racism. No more than the person who invented the word ‘cat’ was the inventor of cats!

Therefore what was the context Trotsky was using those words in, if he only is attacking the idea of inherent racial differences? In the 1930s the word ‘racism’ meant according to the Oxford English Dictionary, “[t]he theory that distinctive human characteristics and abilities are determined by race”. Which sounds exactly like the way Trotsky was using it. No doubt that applies to his earlier usage of ‘racist’ too.

In fact in the 1930s, also according to the OED, the word ‘racialism’ (dating from 1907) meant “belief in the superiority of a particular race; prejudice based on this”.

The current meaning of racism, that of prejudice, has only been attached to it since World War II. Prior to World War II it meant the difference between races. Conversely, ‘racialism’ no longer means racial superiority or prejudice. By the 1960s it had been made redundant as ‘racism’ had replaced it, but William Du Bois redefined it to mean the belief that differences exist between human races. In other words what ‘racism’ meant before World War II when Trotsky was using the word in his writing. A complete reversal.

Therefore the current accusations of racism directed at the Far Right do not mean the same thing as racism did in Trotsky’s writings. The concept of racial superiority itself goes back before Trotsky was even born and he didn’t coin ‘racialism’, which meant in the 1930s what ‘racism’ does today. Just as if Trotsky mentioned ‘gay’ in his writings he’d have meant happy or colourful, not a homosexual.

The International League against Racism and Anti-Semitism was founded as the The League Against Pogroms in 1927, [it] later became the International League against Anti-Semitism and in 1932 it acquired its present name. Magnus Hirschfeld wrote his book Racism in 1933 (trans. into English in 1938) and is generally credited with inventing the word itself. As he was a gay Jew he isn’t too popular with the Far Right either. So there is doubt as to whether Trotsky did originate the word, but even if he did he was using it to describe something that no-one would dispute: that Nazi Germany had an ideology based on the racial differences between Germans and others.

Trotsky did not invent the concept of racism, it was Gobineau the grandfather of Nazi racial politics!

One last little thought: why would people like the BNP, who aren’t apparently racist, object to the very existence of the word? If they weren’t racist and neo-Nazis, why would they say the word has no legitimacy because a Communist invented it? If you did away with the words ‘racist’ and ‘racism’ that would significantly reduce the stigma of such behaviour. So why would the BNP want that if they aren’t racist? Presumably for the same reasons they want to abolish the Race Discrimination Act: they want to be able to be as racist as they like, with no legal or moral impediments.

I live in Melbourne, Australia. I like anarchy. I don't like nazis. I enjoy eating pizza and drinking beer. I barrack for the greatest football team on Earth: Collingwood Magpies. The 2023 premiership's a cakewalk for the good old Collingwood.
View all posts by @ndy →
This entry was posted in Anti-fascism, History, Media, State / Politics, Trot Guide and tagged “...And That’s Why We Should Keep The Bloody Flag The Same!”, Leon Trotsky, Not brotsky or crotsky or drotsky or frotsky. But Trotsky., racism, Shermon Burgess, The Great Aussie Patriot, Trotsky, United Patriots Front. Bookmark the permalink.