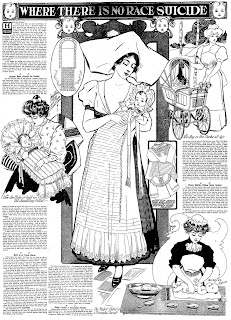 “Race suicide” loomed as an issue “fundamentally infinitely more important than any other question in this country”. For Roosevelt, this was not a matter of workers versus capital or the poor versus the rich. It was a kind of race war pitting the higher races of his native Americans against two groups deemed inferior by dint of their heredity: “degenerate” poor white families of native descent and immigrant workers from southern and eastern Europe. (African Americans hardly figured in this discussion, as prominent race thinkers had convinced themselves that the Negro was dying out, unfitted as he was to live outside of slavery.) As a race publicist in the era of rising worker unrest, Roosevelt dedicated the last decades of his life to exhorting the better classes to reproduce more lustily in order to meet and, he hoped, overcome the demographic competition of their inferiors.

Great slogans are rare, and this one–“race suicide”–though co-opted by Theodore Roosevelt, was not of his invention. Rather, it was coined by the popular and distinguished sociologist Edward A. Ross (1866–1951) in 1901. In “The Causes of Racial Superiority”, both an address to his colleagues in the social sciences and a widely quoted article in the Annals of the American Academy of Political and Social Science, Ross stresses something he terms racial temperament over biological race. He puts it all together–the dominance of racial temperament, the minor role of biological race, disastrous demographics–producing the catastrophe of “race suicide” looming on the horizon. His emblematic phrase picks up Francis Amasa Walker‘s unfavorable demographics and echoes Walker’s wording…

Like other declarations on race, “The Causes of Racial Superiority” contradicts itself from one statement to the next. Ross opens by denigrating the old-fashioned concept of race as “the watchword of the vulgar”. What the craniometricians measure–head shape as a racial trait–interested him not at all. Ross’s racial characteristics are temperamental: “climactic adaptability”, “energy”, “self-reliance”, “foresight”, “stability of character”, and “pride of blood”. These were the concepts to focus on.

In page after page, Ross beats his drum: “the Celtic and Mediterranean races”, “domesticated races” and “economic races”, “the higher races”, “the great races”, “the higher blood”, “the Superior Race” with capital letters, and, echoing Emerson’s “singing and dancing nations”, “the childishness or frivolousness of the cheaply-gotten-up, mañana races”. “The economic virtues”, he concludes in italics, “are a function of race“. All this appears in a lecture aimed at an audience of scholars of the American Academy of Political and Social Science.

Writing for a popular audience in the Independent, Ross echoes Emerson’s and Roosevelt’s image of American pioneers as Vikings, selected “not for the brainiest or noblest or highest bred” but for the “strongest and most energetic”. Like Ripley and the Teutonists, Ross prizes height and denigrates by name the people he thinks too short. Sardinians did not make the cut, nor did those “masses of fecund but beaten humanity from the hovels of far Lombardy and Galicia”, and “cheap stucco manikins from Southeastern Europe… from Croatia and Dalmatia and Sicily and Armenia, they throng to us, the beaten members of beaten breeds… Slovaks and Syrians… as undersized in spirit, no doubt, as they are in body.”

Finally, willing to use any weapon at hand, Ross accepts the reasoning of then fashionable, self-styled European “anthroposociologists”, physical anthropologists Otto Ammon and Georges Vacher de Lapouge, who bent Darwinian natural selection to their mania of craniometry and had also made their way into William Z. Ripley’s influential Races of Europe. Ammon and Lapouge were spinning out fantastical theories of race temperament based on the cephalic index, famously pronouncing European townspeople more long-headed (meaning, for them, more Teutonic and superior) than the people of the surrounding countryside (those more Celto-Slav and inferior). Following them, Ross concludes that the “city is a magnet for the more venturesome, and it draws to it more of the long-skulled race than of the broad-skulled race… [T]he Teuton’s superior migrancy takes him to the foci of prosperity, and procures him a higher reward and a higher social status”. For someone dismissing race as superstition, Ross bought right into the mumbo jumbo of racial skull shapes.

In lockstep with Ross, Roosevelt opined, “If all our nice friends in Beacon Street, and Newport, and Fifth Avenue, and Philadelphia, have one child, or no child at all, while all the Finnegans, Hooligans, Antonios, Mandelbaums and Rabinskis have eight, nine, or ten–it’s simply a question of the multiplication table. How are you going to get away from it?” But Roosevelt did not have the public sphere to himself. While he was nagging educated women of “our own type” to bear babies, a less articulate, but nonetheless oppositional, discourse arose that undercut his fundamental assumptions. Worker-oriented commentary, especially (but not exclusively) in the foreign-language press, disputed both the notion of upper-class racial superiority and the logic of racial determinism. Their point was well-taken, for the so-called beaten men from beaten races were doing most of the work. In the garment, iron, and steel industries, in the mines and mills that kept the amazing American economy running, immigrants supplied the necessary brawn. The rhetoric flowing from the country’s Roosevelts and the Rosses might harp on race–the Italian race, the Jewish or Hebrew race, the Anglo-Saxon race. Such blather only obscured–in words, at least–the gaping chasm between the classes, and the working classes were beginning to have their say.

The Industrial Workers of The World (IWW, or Wobblies), founded in 1905, became the most visible sign of working-class mobilization. Repudiating the American Federation of Labor’s business model of organizing only skilled workers (now monopolized by English-speaking northwestern Europeans, especially Irish-Americans), the IWW welcomed all kinds with an “industrial” model that sought to bring the unskilled, immigrant masses into unions by stressing their interests as workers.

With their working-class readership, Italian and Yiddish newspapers came to reflect the anarchist and socialist views of their readers. The earliest Italian and Yiddish newspapers sprang up in New York in the 1880s, with the left press appearing in the following decade. The anarchist Il Proletario was founded in Hoboken, New Jersey, in 1902, as the organ of the Italian Socialist Federation, joining the socialist Jewish Daily Forward founded in 1897. Such papers depicted American society quite differently from the tony [?] journals that couched their race theory in quasi-scientific, quasi-historical terms.

Italian anarchists especially heaped scorn on American self-righteous blindness, above all when it came to injustices inflicted on blacks in the South. True, other immigrant workers had become targets of labour abuse, but Italians had suffered a special wound, the lynching of eleven Italians in New Orleans in 1891. As though to echo David Walker’s 1835 accusations, Il Proletario skipped over the idea of white races and stressed the injustices of black Americans at the hands of native-born whites. A blast from Il Proletario in 1909 asked:

Who do they think they are as a race, these arrogant whites? From where do they think they come? The blacks at least are a race, but the whites… how many of them are bastards? How much mixing is their “pure” blood? And how many kisses have their women asked for from the strong and virile black servants? As have they, the white males, desired to enjoy the virile pleasures of the black women of the sensual lips and sinuous bodily movements? But the white knights care little for the honor and decency of the black women, whom they use and abuse as they please. For these, race hatred is a national duty.

Sounding a note that grew louder and louder, Il Proletario reached a ringing conclusion: “Not race struggle but class struggle”.

But it was too early, and Il Proletario‘s exhortation fell on ears attuned to another sort of analysis, one that interpreted class status as permanent racial difference with African Americans largely cornered in the South; the “race” in this race question was as much white as black.

I live in Melbourne, Australia. I like anarchy. I don't like nazis. I enjoy eating pizza and drinking beer. I barrack for the greatest football team on Earth: Collingwood Magpies. The 2023 premiership's a cakewalk for the good old Collingwood.
View all posts by @ndy →
This entry was posted in !nataS, Anarchism, Anti-fascism, Broken Windows, Death, History, Sex & Sexuality, State / Politics, That's Capitalism! and tagged "Race suicide", Nell Irvin Painter, The History of White People. Bookmark the permalink.