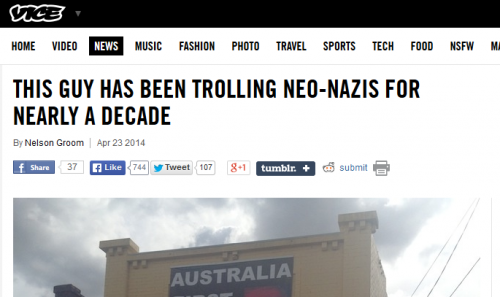 I did an interview with vice. You can read it here.

• “Trolling” isn’t the most accurate term to describe my blogging and other activity aimed at the far right but hashtag whatever.

• FightDemBack! deserves some credit/blame for my blogging.

• A comparison of the the extreme right in Australia, the UK and US is a useful exercise, especially in light of the fact that Australia and the US are products of British colonialism. In the US context, the legacy of slavery plays a crucial role in shaping contemporary US politics, as does the White Australia policy in the Australian context. On race and politics, I recommend Nell Irvin Painter, The History of White People (W.W. Norton & Co., 2010), The Invention of the White Race by Theodore W. Allen, published by Verso (Volume One (1994) is sub-titled ‘Racial Oppression and Social Control’; Volume Two (1997) ‘The Origin of Racial Oppression in Anglo-America’) and (for Australia) ‘The Power of Whiteness’ (1998) and ‘Whiteness and Blackness in the Koori Struggle for Self-Determination’ (1999) by Gary Foley and the work of Alana Lentin and The Australian Critical Race and Whiteness Studies Association (ACRAWSA).

Otherwise, Golden Dawn in Greece and Jobbik in Hungary arguably belong to another category of politics than do the ‘Tea Party’ phenomenon in the US or the Independence Party in the UK (or One Nation in Australia). On the far right, see : A tentative table on far-right radicalism, The Murphy Raid, December 9, 2012.

• On racism in Australia, attitudes have been shaped, crucially, by its status as a (former) colony, the ongoing dispossession of Indigenous peoples, and a long history of commitment to Australia being a White outpost of British Empire in the Asia-Pacific region. It’s very difficult, if not impossible, to understand racial discourses without reference to this history or its contemporary reality, whether expressed as bipartisan support for mandatory detention or the chronic incapacity of the state and its legal and political instrumentalities to recognise Indigenous sovereignty.

I live in Melbourne, Australia. I like anarchy. I don't like nazis. I enjoy eating pizza and drinking beer. I barrack for the greatest football team on Earth: Collingwood Magpies. The 2023 premiership's a cakewalk for the good old Collingwood.
View all posts by @ndy →
This entry was posted in Anti-fascism, Media and tagged Andy Fleming, Neo-Nazi skinheads, slackbastard, vice. Bookmark the permalink.