According to the University of Sydney’s student paper Honi Soit, “White supremacist posters, which depicted the Celtic cross, and exclaimed “White Pride Worldwide”, were last week plastered on a bus stop outside Wentworth Building.” While the article doesn’t nominate who was responsible for putting them up, a Stormfront user using the handle “truewhitewarrior” claims it was him what done it. Similar posters appeared at Swinburne University in Victoria in October last year.

The article has provoked the usual howls of protest from Stormfront, contains one or two errors, but otherwise seems reasonably straightforward. For those interested in reading more about ‘Whiteness, Demography and Politics’, I recommend Nell Irvin Painter, The History of White People (W.W. Norton & Co., 2010), The Invention of the White Race by Theodore W. Allen, published by Verso (Volume One (1994) is sub-titled ‘Racial Oppression and Social Control’; Volume Two (1997) ‘The Origin of Racial Oppression in Anglo-America’), ‘The Power of Whiteness’ (1998) and ‘Whiteness and Blackness in the Koori Struggle for Self-Determination’ (1999) by Gary Foley and the work of Alana Lentin and The Australian Critical Race and Whiteness Studies Association (ACRAWSA).

Below are some comments of my own.

Whilst one would think it easy to determine how many white supremacist groups there are in Australia, some ostensibly racist organisations reject the label. The Australia First Party (AFP), for example, prefers to consider themselves a “united patriotic front”.

Yes. A “front” which is also committed to a White Australia (and, somewhat oddly, has as its leader a fella of Lebanese descent).

These organisations hold in common a desire for racial separation, but are divided on what constitutes a white nation. Some white supremacists, such as Tom Metzger, the founder of White Aryan Resistance (WAR), believe in white nationalism, or a global community of white people.

I’m not sure this is an entirely accurate characterisation: a desire for racial separation (apartheid) can be enacted within the one nation (Australia, South Africa etc); Metzger’s primary inspiration is Nazism.

Others, like the Southern Cross Hammerskins (SCHS) and the AFP place a specific emphasis on state-based white nationalism, through their use of the Eureka flag and warnings of the “chaos of globalism”.

The SCHS are the Australian chapter of an international network of neo-Nazi skinheads known as the Hammerskins; while members do sometimes employ the Eureka flag as an emblem, the Hammerskins have their own iconography, drawing upon their own history and that of the European far right and Nazism in particular. AF, on the other hand — like the group ‘National Action’ which preceded it — is much more explicitly rooted in what it terms ‘Australianism’, a kind of disembrained, dinky-di version of national socialism (broadly understood).

This sense of race-based patriotism unites many Australian white supremacists. To this end, the AFP claim to be fighting a “yellow peril” by endorsing a traditional, patriarchal family structure, while Blood and Honour claim their promotion of racist music to be an act of resistance to non-white cultural influences.

While a man with contrary views was once the leader of the minuscule yoof wing of AF, the party as a whole does indeed take a dim view of homosexuality, especially any public expression of same-sex desire; an endorsement of ‘traditional family values’ is intended to help secure the reproduction of White race + nation, and draws upon a long history of paranoid (White, Australian) nationalism (see Ghassan Hage).

According to one supporter, two of the most prominent groups, Blood & Honour and the SCHS, “work in brotherhood” but are not formally affiliated.

Both have their own subsidiary groups, replicating the structures of their overseas predecessors. Combat 18 is an affiliate group of Blood and Honour and bizarrely the SCHS have their own “supporter’s club”, Crew 38.

The tiered relationship between SCHS and Crew 38 is reflective of a tightly hierarchical culture in white supremacist organizations. A spokesperson for Exit White Power, an anti-white supremacist project, stated that there are “a lot of rules about where you sit in that hierarchy, who you answer to, and what’s involved in different stages.”

1. B&H and the SCHS are not merely White supremacist but neo-Nazi.
2. The structure of the SCHS closely resembles that of an OMC (Outlaw Motorcycle Club). Thus in addition to a formal membership there’s an allied and subsidiary group (Crew 38) which supports the Hammerskins and is the group from which members are drawn (after having demonstrated their loyalty and commitment).
3. C18 has a fractured history but most relevant is the fact that B&H is divided into two competing camps, one aligned to C18 and the other under the control of the Hammerskins. In Australia, C18 has a presence in WA and VIC. As noted elsewhere in the article, in January:

“… four men were found guilty … in a Perth court for distributing racist stickers promoting Combat 18 — stickers also being distributed by boneheads in Melbourne’s northern suburbs. One of the men convicted, Jacob Marshall Hort, was previously responsible for administering a Combat 18 website (terrormachine.net) and played in the band ‘Indigenous Hate’. In July 2010, Hort was convicted of criminal damage and discharging a firearm stemming from an incident in which several shots were fired at the Queens Park Suleymaniye Mosque, causing $15,000 damage. Note that Hort & Co have been denounced by ‘Blood & Honour Australia’ (that faction aligned with the Hammerskins) as liars and traitors; his (former?) C18 comrade, Bradley Trappitt, has since been welcomed into the New Right/’national anarchist’ camp by its leader Welf Herfurth.”

The typical demographic for such groups is young men, aged 14-25, who are often socially alienated and lack other commitments – work, mortgages, marriage, children – which may interfere with their dedication to the group.

“There are not many happy, stable young people joining white supremacist groups,” the EWP spokesperson notes. The appeal is often social, not ideological, and the prevalence of music concerts in the white supremacist community seeks to capitalise on this.

I would suggest that the typical demographic, for the Hammerskins at least, is older than this. Further, its mainstays — whether happy or sad — are generally men in their 20s and 30s, employed, married/partnered and often with children.

The Australia First Party retains an official headquarters in Tempe, in Sydney’s Inner West. It was at these headquarters that an AFP supporter was shot and killed by another in 1991.

Violence within white supremacist groups is common and is a powerful deterrent to leaving these organisations. “They can be very insular, and they tend to bash each other up quite a lot,” said the EWP spokesperson.

The murder referred to above was that of Wayne “Bovver” Smith by Perry Whitehouse. The two boneheads were members of National Action (1982–?), the group Dr Jim Saleam led before he was imprisoned (1991) for organising a shotgun assault on the home of African National Congress representative Eddie Funde in 1989; Jim assumed effective leadership of AF in the early-2000s and formal leadership in the mid-2000s. The party itself was established by former Labor MP Graeme Campbell in 1996. As for violence, its promise tends to act as an attractor for White supremacist groups, which celebrate its enactment for its allegedly morally and politically redemptive qualities.

It can be difficult to ascertain the extent to which extremist activity manifests itself offline. EWP’s spokesperson acknowledged that there is a lot of activity online, but describes the majority of those belonging to white supremacist groups as “keyboard warriors,” reiterating her earlier point that these groups “exist mainly for themselves”.

She points out the humorous contradiction that “one of the things they always talk about is how no one wants to meet up.” The content of Stormfront’s Down Under forums certainly supports her assertion.

And as for the “White Pride Worldwide” posters, she points out that there was no call to action involved, and no group claimed responsibility.

“They were likely just some kids who read about the White Man’s March online,” she said.

Stormfront users and other White supremacists make sporadic attempts to organise offline but, while some choose to be active in AF or other such groups (Nationalist Alternative, New Right/’national anarchists’), with some few, notable exceptions, there have been very few public rallies by White supremacists in the last decade or more, and these have tended to be very small in number. The Cronulla ‘riot’ of 2005 was widely applauded by AF, Stormfront users and others, but while it remains a continuing source of hope and inspiration, none proved able to capitalise on it any substantial fashion.

Below : Sydney’s super contribution to the ‘White Man March’: 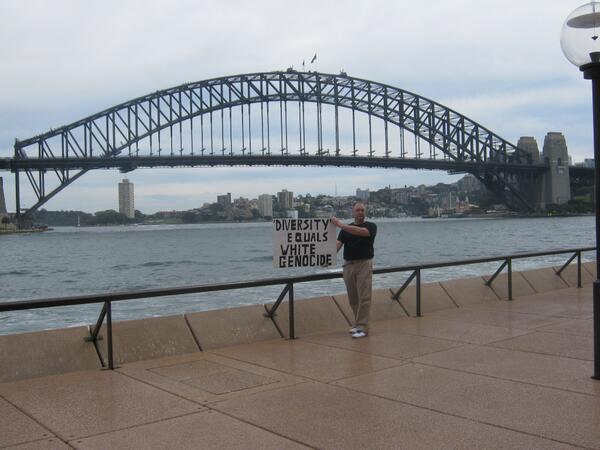 I live in Melbourne, Australia. I like anarchy. I don't like nazis. I enjoy eating pizza and drinking beer. I barrack for the greatest football team on Earth: Collingwood Magpies. The 2023 premiership's a cakewalk for the good old Collingwood.
View all posts by @ndy →
This entry was posted in Anti-fascism, Media, State / Politics, Student movement and tagged Honi Soit, Stormfront, Stormfront Down Under. Bookmark the permalink.