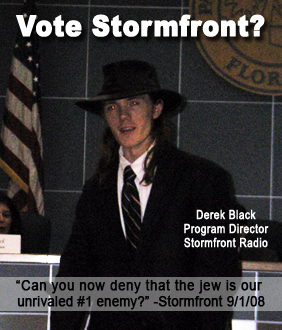 “I acknowledge that things I have said as well as my actions have been harmful to people of color, people of Jewish descent, activists striving for opportunity and fairness for all, and others affected.”

“I can’t support a movement that tells me I can’t be a friend to whomever I wish or that other people’s races requires me to think about them in a certain way or be suspicious of their advancements,” Black wrote toward the end of his four-page statement. “Minorities must have the ability to rise to positions of power, and many supposed ‘race’ issues are in fact issues of structural oppression, poor educational prospects, and limited opportunity. The differences I thought I observed didn’t go nearly as deeply as I imagined. I believe we can move beyond the sort of mind-boggling emphasis white nationalism puts on maintaining an oppressive, exclusive sense of identity — oppressive for others and stifling for our society.”

I haven’t been paying much attention to the Stormfront website in the last few years (see The Stormfront Down Under Circus : 2004–2008, May 31, 2008), partly because there’s only so much racist butthurt I can stomach, partly because the site has lost some of its attraction for local white supremacists and neo-Nazis, many of whom now find Facebook a more suitable outlet for their diatribes. That said, the site remains an important recruiting and publicity tool for groups like Dr Jim Saleam‘s Australia First Party and Kyle Chapman’s Right Wing Resistance, as well as the handful of other, smaller and more loosely-structured groupuscules such as Blood & Honour and Nationalist Alternative. It’s also the site of occasional announcements regarding cultural border protection…

The news of Derek’s departure from the movement his father has dedicated his life to promoting has naturally caused some waves among the Stormfront community. Among those commenting on Derek’s statement is ‘White Australian’ (http://www.stormfront.org/forum/t981157/#post11384793): “We need to support Don Black and his family through this very difficult period. In the end, our entire movement is not about “hate” but the love of our people, our culture, our family and our nation.”

As well as serving as the moderator on Stormfront Downunder, ‘White Australian’ is the leader of the Melbourne-based group Nationalist Alternative; last year he attended the annual Stormfront Seminar, which this year is taking place on August 10: “This will be an inspiring gathering with fellowship among dedicated activists in the beautiful mountains. Like last year, this isn’t a hand-wringing meet-eat-and-retreat, but a practical politics seminar on winning. As always, I [Don Black] will be MC. Seminar leaders include leading pro-White activists David Duke, Sam Dickson, Paul Fromm, Matthew Parrott, Horus the Avenger, Truck Roy, and Stormfront Chief of Staff Jack Boot.”

As it stands, I’m unaware of any Stormfront user or white supremacist organiser from Australia renouncing ‘white nationalism’ in the manner Derek has, most who have left the ideology in the gutter simply electing to quietly abandon their public activities. One person who has not is Peter Watson – the teenage fascist who in 2012 was endorsed by Queensland Labor for the seat of Warwick (before quickly being disendorsed). Peter and other white nationalists will, however, be happy with Chairman KRudd’s ‘Papua New Guinea’ solution … of which, more later.

I live in Melbourne, Australia. I like anarchy. I don't like nazis. I enjoy eating pizza and drinking beer. I barrack for the greatest football team on Earth: Collingwood Magpies. The 2023 premiership's a cakewalk for the good old Collingwood.
View all posts by @ndy →
This entry was posted in Anti-fascism, Media and tagged Derek Black, Don Black, Stormfront Down Under. Bookmark the permalink.