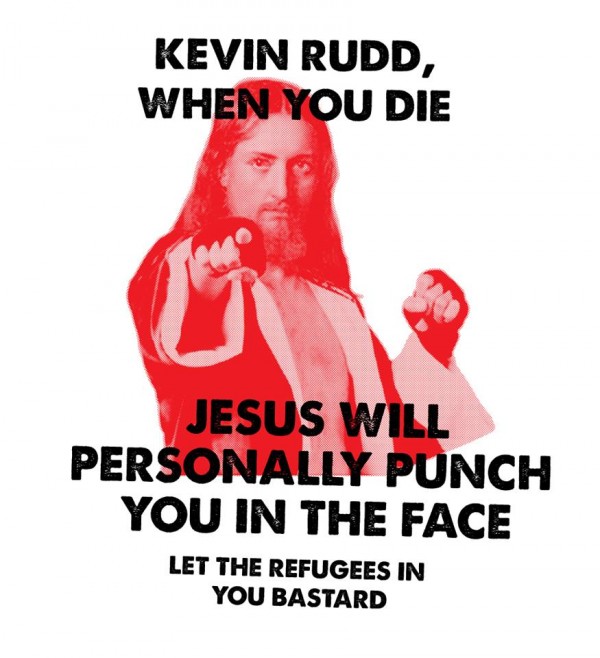 Well there’s not really a lot to add: ahead of the 2013 federal election, PM KRudd and Opposition Leader The Mad Monk are scrambling to outdo each other in their defence of The Nation, with KRudd first declaring (possibly unlawfully) that no asylum seeker arriving by boat would be able to claim refuge in Australia and now Tony Fucking Abbott wanting to establish “a military-led response to combat people smuggling and to protect our borders – Operation Sovereign Borders”.

Has social democracy reached its limits? The facts speak for themselves.

In any event, along with happy news that the prison in Nauru (Nauru) was badly damaged by fire earlier in the week, this weekend there will again be protests and rallies around the country (see Boundless Plains to Share), including in Melbourne.

You can find a collection of posters promoting the Melbourne rally here; border-ctrl [delete] contains other agitprop; here’s a song:

I live in Melbourne, Australia. I like anarchy. I don't like nazis. I enjoy eating pizza and drinking beer. I barrack for the greatest football team on Earth: Collingwood Magpies. The 2023 premiership's a cakewalk for the good old Collingwood.
View all posts by @ndy →
This entry was posted in !nataS, Anarchism, Anti-fascism, Broken Windows, Death, History, Media, Music, State / Politics, That's Capitalism!, War on Terror and tagged KRudd, Nauru, refugees, The Mad Monk. Bookmark the permalink.