Who is Peter Watson? 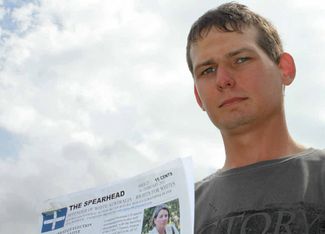 Above : Peter Watson holds a copy of his zine The Spearhead (Warwick Daily News).

Given the nature of much of the media commentary that’s been generated in the wake of his forced resignation from the ALP, there’s likely not much point reviewing Peter Watson’s political (d)evolution over the last 5 or so years — but then again…

For the record, and to the best of my knowledge, Peter’s downfall began with the publication of an article in Brisbane’s Courier Mail on February 20 (soon edited in light of breaking news). This article cites several comments by a ‘Peter Watson’. Thus:

Yesterday, The Courier-Mail reported that a teenage Labor candidate has been forced to resign after being linked to online rants about homophobia and neo-nazis.

Peter Watson, 19, was stood aside as Labor’s candidate for the safe conservative seat of Southern Downs even though the party insisted he was not responsible for some of the highly offensive material.

Among posts under the name “Peter Watson”, homosexuals are labelled as “degenerates” who should be “wiped out”.

“Homosexuality and pedophilia go hand in hand with each other,” the post states.

“To deal with one you must deal with the other in order to wipe them from society.”

In another post under the name “Peter Watson aka Stalinist”, the contributor insists he has masqueraded as a neo-nazi to “get information out of the enemy”.

“I gave the information about the stupid neo-nazis to my comrades and they dealt with the neo-nazis,” it states.

“Now most of those neo-nazis are in jail or bashed thanks to my lie.”

There is also a post in which a “Peter Watson” promises to give out information on fellow Labor Party members as part of his “long battle against the commies in the branch here in Warwick”.

One post from 2007 also talks about dressing up as Soviet soldiers to fight the US.

“We all attack each other with water guns, rocks, sticks,” it says.

The source for these quotes are (in order of their appearance in the article):

I am not lunatic and nor am I mad. The ideas that I am putting forward are really logical if you think about them. They are based on years of studying and thinking about the current situation and system that are facing the Australian people. The reason why you think that I am mad is because my ideas are totally different to … your ideas. I never said “mad discussions”. The reason why I refer to Drew as comrade is because he is a very good friend to have in the battle against international anarchism and the capitalist-intelligentsia regime which currently controls Australia through proxy forces in the legislature, executive and in the legal system. I was being serious when I was talking about the local gym and Drew’s decision to become involved in his local gym for young men. You people have no idea how serious I am when I talk about these and other matters at hand. Just wait until I prove my self and then all you people will be scared. Yes, I am homophobic. Homosexuals disgust me with their decadent attitudes to life and their life styles. They are really bad for our society and they need to be dealt with by the powers to be. The homosexuals are the true social degenerates. It is a proven fact that most paedophiles are homosexual. Homosexuality and paedophilia go hand in hand with each other. [T]o deal with one you must deal with the other in order to wipe them from society. They are social degenerates destroying our society’s values. We must come up with a final solution to solve these problems. You people think that I am trying to be funny or be a comedian. Well, I am not. In fact, I am more serious th[a]n most people think. Just wait until the new world order when we achieve power.

I only acted like a Neo-Nazi to get information out of the enemy. It worked big time.

Yes I know. I told the Neo-Nazis that I was the president of a “Australian Worker’s Party” and heaps of them joined. I gave the information about the stupid Neo-Nazis to my comrades and they de[a]lt with the Neo-Nazis. Now most of those Neo-Nazis are in jail or bashed thanks to my lie.

This quote — in which Peter promises to give out information on fellow Labor Party members as part of his “long battle against the commies in the branch here in Warwick” — is the only one cited not to be taken from my blog. Instead, it appears on the neo-Nazi ‘Whitelaw Towers’ blog (the responsibility of Sydney resident Peter Campbell and Toowoomba local Jim Perren, middle-aged men with long histories of fascist advocacy). The comment is in response to a post dated March 4, 2009. 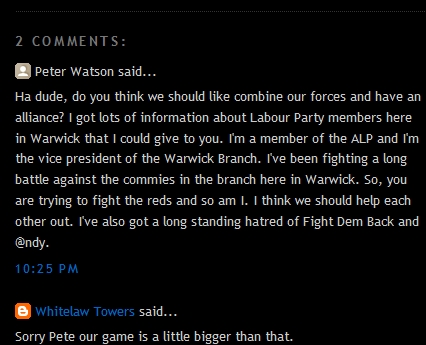 In addition to spamming my blog with nonsense and contributing to numerous other marginal politically-oriented websites — including, notably, Stormfront and Vanguard News Network — one of the first sites Peter himself created was at cpwcpw.wetpaint.com. This site served as the home of first the ‘Communist Party of Warwick’ then the ‘Stalinist League of Australia’, from November 9, 2006 to July 9, 2008.

After this date, Peter made many further comments on my blog.

On March 19, 2009, for example, Peter wrote in praise of the Nazi Strassers, writing HAIL STRASSER; later that month, on the same date as he posted his diatribe on homosexuals, Peter stated that he “would not be rejoining the Australia First Party”; on May Day he expressed appreciation for YouTube channel ‘genocidal88’, a channel maintained by a local Hammerskin and used to promote neo-Nazi propaganda; on June 25 Peter dismissed local KKK member ‘Hobbit’ and claimed to have been banned from the Australian New Nation forum (a White nationalist website established by remnants of the ‘White Pride Coalition of Australia’, including the authors of ‘Whitelaw Towers’); on July 9 he stated that he was a “National Socialist” — and had been since the beginning of that year.

In 2010 Peter (‘supremerat’) commented on a YouTube video. He stated that he wished that whining Jews would be gassed to death.

In November 2011, Peter helped to distribute copies of The Spearhead about Warwick. This enterprise earned him an article in the local paper and a rebuke from concerned locals.

It was sometime in 2011 (or possibly 2010) that Peter began re-imagining himself as ‘Australian New National Action’, a successor organisation to Dr James Saleam’s ‘National Action’, a fascist groupuscule born in the 1980s. According to its Contacts page, ANNA was responsible for producing The Spearhead zine. 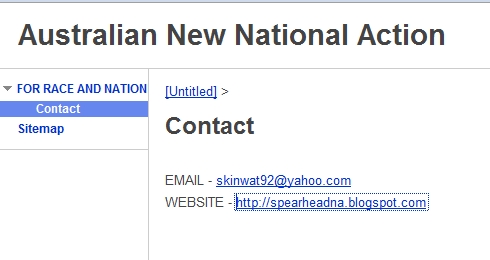 At the beginning of 2012, Peter made a major statement of his political vision, viz:

Australia needs a strong man to solve its problems. A man who will crush lefties, politicians, non-whites, homosexuals and other sexual deviants, undesirables, troublemakers, the middle class inner city elite and traitors to the Australian nation. A man who will stand up to foreign imperialism and international capitalism. A strong man who will unite Australians under one banner against the enemies of our nation both internally and externally. A great man who will eliminate and do away with our stupid weak democracy and impose his will upon us. I would be more than willing to get behind him and die for the movement. Liberal democracy has been a failure and must be destroyed. The opposition, who are the enemies of Australia, must be smashed and thrown into concentration camps. A man who will destroy multiculturalism and all other forms of social liberalism and who will restore White Australia at all costs. Australia needs a modern day Fidel Castro, Joseph Stalin, Adolf Hitler, Benito Mussolini or a General Franco. Or the Australian Defence Force could take power in a military coup and execute the Federal Government and establish a military junta. How about it, His Excellency President of the Republic of Greater Australia and Major General of the Australian Defence Force Peter Watson Conquerer of Asia and the Pacific Defeater of International Capitalism Generalissimo and Supreme Leader?

This comment was posted after Peter had been nominated as the ALP candidate for Southern Downs and many weeks prior to his removal from that position and expulsion from the party.

Its open embrace of fascism has not been commented upon in the media.

Further evidence regarding Peter’s political views of the last year or two (and thus following his formal entry into adulthood) are to be found on Stormfront (where he posted using a variety of handles) and on the VNN forum where Peter adopted the handle ‘V.K.’. In fact, it would appear that Peter continues to post on VNN, even appealing to fellow users to vote in his favour in an online poll regarding the fairness of his expulsion from the ALP, denying allegations by fellow neo-Nazis that he is a traitor, and expressing fears that his writings in The Spearhead may make him a target for violent retribution. In one thread, Peter also claims to have been fined $500 for the crime of ‘public nuisance’, viz, abusing Aborigines in the street.

Finally, this is the image Peter uses to illustrate his MySpace page:

I live in Melbourne, Australia. I like anarchy. I don't like nazis. I enjoy eating pizza and drinking beer. I barrack for the greatest football team on Earth: Collingwood Magpies. The 2023 premiership's a cakewalk for the good old Collingwood.
View all posts by @ndy →
This entry was posted in !nataS, Anti-fascism, History, Media, State / Politics, Student movement and tagged Peter Watson. Bookmark the permalink.

5 Responses to Who is Peter Watson?