Or: Your ideas are intriguing to me, and I wish to subscribe to your newsletter. 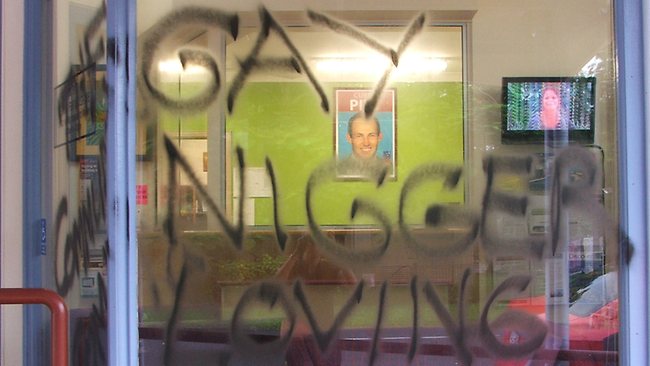 The Liberal National Party are going to win the 2012 Queensland state election. (Centrebet is currently paying $8.50 and Sportsbet $7.00 for a Labor win.) The only real questions, then, are By how many seats will the LNP win? and Will Katter’s Australian Party win more than two? Otherwise, there’s a relative absence of fringe participation in the election, with neither the Australia First nor the Australian Protectionist parties fielding any candidates and One Nation standing just six. (The forces of right-wing populism are obviously best represented by The Mad Hatter.) On the other side of the fence, the Socialist Alliance is contesting half that number. And where oh where are The Communists?

In other news, Premier Anna Bligh has condemned a racist and homophobic graffiti attack on the office of one of her ministers [Curtis Pitt] as ‘‘unAustralian’’ and ‘‘absolutely disgusting’’.

But if you look at Australian history, I think you may find some evidence of racism and homophobia. In fact, some argue that racism and homophobia still animate the body politic. As for Communism, I think Labor may have even supported its banning Once Upon A Time, along with a range of other measures intended to keep Moscow from dominating the Antipodes.

Labor really should learn how to use Google.

I live in Melbourne, Australia. I like anarchy. I don't like nazis. I enjoy eating pizza and drinking beer. I barrack for the greatest football team on Earth: Collingwood Magpies. The 2021 premiership's a cakewalk for the good old Collingwood.
View all posts by @ndy →
This entry was posted in !nataS, Anti-fascism, Broken Windows, Media, Sex & Sexuality, State / Politics, That's Capitalism! and tagged “...And That’s Why We Should Keep The Bloody Flag The Same!”, The Communist Gay Communist N*gg*r Loving Party. Bookmark the permalink.