To vote or not to vote [2013 Australian federal election] #auspol 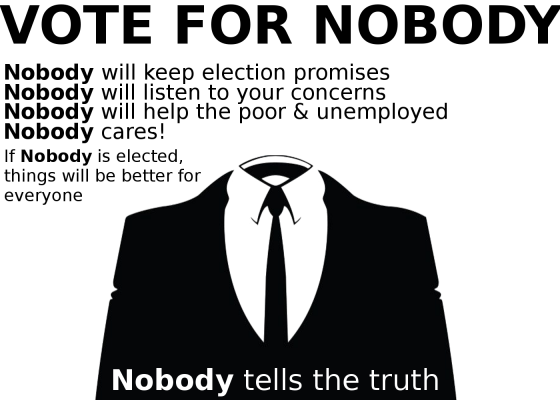 ‘If voting changed anything, they’d make it illegal.’
‘Whoever you vote for, government wins.’
‘Don’t vote: it only encourages them.’
‘If you think it’s humiliating to be ruled, how much more degrading is it to choose your master?’
‘A change of rulers is the joy of fools.’

So yeah: there’s an election coming up apparently. In fact, it’s LESS THAN 100 DAYS AWAY (September 14)!

Generally, when it comes to elections, I tend to focus on the margins: who are the kookiest candidates, which single-issue group has newly-registered, which media celeb or law-talking guy or gel will be the new voice of labour — and just how many votes did the Socialist Alliance get? I’ve also generally assumed that articulating a critique of voting in a democracy such as Australia is unnecessary given that such a critique has been around, in one shape or another, since the beginnings of the modern era and the emergence of mass democratic politics in the late nineteenth century. Certainly, anarchists and other radicals have been banging on about the limitations of ‘democracy’ for long enough. Of course, there’s democracy and then there’s democracy. Of the distinction between representative and delegate democracy, Ken Knabb writes:

In representative democracy people abdicate their power to elected officials. The candidates’ stated policies are limited to a few vague generalities, and once they are elected there is little control over their actual decisions on hundreds of issues — apart from the feeble threat of changing one’s vote, a few years later, to some equally uncontrollable rival politician. Representatives are dependent on the wealthy for bribes and campaign contributions; they are subordinate to the owners of the mass media, who decide which issues get the publicity; and they are almost as ignorant and powerless as the general public regarding many important matters that are determined by unelected bureaucrats and independent secret agencies. Overt dictators may sometimes be overthrown, but the real rulers in “democratic” regimes, the tiny minority who own or control virtually everything, are never voted in and never voted out. Most people don’t even know who they are.

In delegate democracy, delegates are elected for specific purposes with very specific limitations. They may be strictly mandated (ordered to vote in a certain way on a certain issue) or the mandate may be left open (delegates being free to vote as they think best) with the people who have elected them reserving the right to confirm or reject any decision thus taken. Delegates are generally elected for very short periods and are subject to recall at any time.

In the context of radical struggles, delegate assemblies have usually been termed “councils.” The council form was invented by striking workers during the 1905 Russian revolution (soviet is the Russian word for council). When soviets reappeared in 1917, they were successively supported, manipulated, dominated and coopted by the Bolsheviks, who soon succeeded in transforming them into parodies of themselves: rubber stamps of the “Soviet State” (the last surviving independent soviet, that of the Kronstadt sailors, was crushed in 1921). Councils have nevertheless continued to reappear spontaneously at the most radical moments in subsequent history, in Germany, Italy, Spain, Hungary and elsewhere, because they represent the obvious solution to the need for a practical form of nonhierarchical popular self-organization. And they continue to be opposed by all hierarchical organizations, because they threaten the rule of specialized elites by pointing to the possibility of a society of generalized self-management: not self-management of a few details of the present setup, but self-management extended to all regions of the globe and all aspects of life.

But as noted above, the question of democratic forms cannot be separated from their economic context.

Briefly, then: periodic opportunities to vote for parliamentary representatives offers a radically impoverished vision of democracy; the limits of political debate are highly constrained; the reduction of ‘politics’ to the squabbling for power by a small segment of middle-class apparatchiks thrills me now even less than it did when I was a student. Expressed as cynicism, these sentiments are widely shared, but a social movement committed to and capable of realising radical democratic forms — let alone anarchy — is noticeable only by its absence.

Recently, however, I’ve been struck by the importance accorded to the battle between Joolya and The Mad Monk for the title of Prime Minister by some of the folks I follow on Twitter and also by some of the issues raised by Ben Pobjie in his post Seize The Defeat (June 12, 2013). In essence, Ben reckons that those on the nominal ‘left’ should not only adopt lesser evilism (in choosing between X and Y one should choose the better (or less evil) option) but should also (re-)commit themselves to promoting principled policy-making (“let’s rediscover our integrity and commit to standing up, in all circumstances, for what we really believe, for what we think is RIGHT, rather than desperately trying to rationalise support for better-than-Abbott”).

Which is, I suppose, fair enough — as far as it goes.

As far as the True Believers are concerned, one of the few remaining priests outside of the trade union leadership who remains voluble is Bob Ellis — worshipped by Marieke Hardy and also, apparently, responsible for a never-to-be filmed script of Homage to Catalonia — who a few days ago confidently predicted that his party would win in a landslide. Be that as it may, while Labor is represented by Thinkers like Bob and Doers like Paul Howes and Rich0 (below), I can’t see it successfully recapturing that much support between now and its seemingly-inevitable defeat come September. 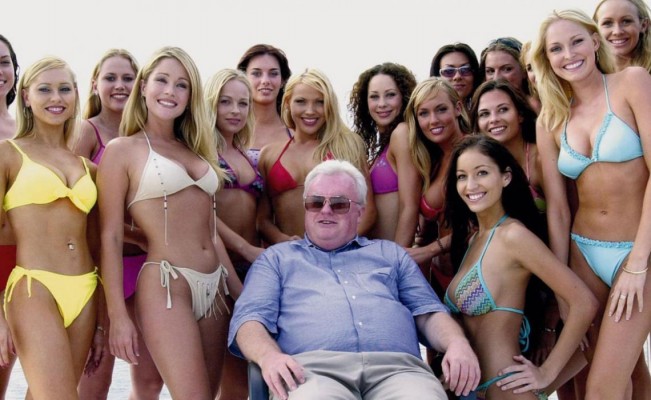 Beyond this, there’s been a good deal of disco about The Fate of Teh Left recently, and a lotta hand-wringing over its absence in the Labor party WHICH IS STILL NOT AS BAD AS THE COALITION et cetera (Dr Tad blogs regularly on this subject). This time last year, Preston’s Own Christos Tsiolkas warned of The Toxicity of Smugness; last month, Helen Razer discovered that Teh Left was indeed dead.

I’ve never really felt a part of the left, in almost any of its forms, a fact which lends itself to a tendency to be derelict in my democratic duties (aka periodically ratifying in advance the decisions made by politicians). I also think that the contemporary Australian left is a fairly unattractive figure, and the debates over voting — especially insofar as they consist of barracking for Gillard against Abbott — have only made me feel more estranged: if I’m gonna be parochial, I’d rather it be in relation to something silly like sport.

Each election, for the last 30 years or so, Uncle Joe Toscano has thrown his hat into the ring, not because he has any expectation of winning, but because such occasions provide him with an opportunity to raise the profile of anarchism (just as Engels argued of elections with regards state socialism). Other anarchists (both in Australia and many other countries) have engaged in anti-electoral campaigns, denouncing parliamentary democracy as a sham and proclaiming instead the necessity of social revolution. (If memory serves, former PM Bob Hawke was once pitted by troublemakers against a rat in his seat of Wills.)

In the 1980 federal election the late, great anarchist poet Jas H Duke wrote “Hang Fraser” on the House of Representatives ballot paper, “The Road to Excess Leads To The Palace Of Wisdom” on the (much larger) Senate paper, and then wrote a poem about it. Duke was foremost a boomingly witty poet and a very demonstrative activist, one who sure knew his Blake and his Bakunin.

Apart from Clive Palmer’s Uniting Australia Party, among the other new parties scrambling for your vote in 2013 are the Animal Justice Party, Bank Reform Party, Bullet Train for Australia, Pirate Party and Rise Up Australia Party; the AEC also maintains a list of those parties which have ended, stumbling bleary-eyed into the harsh light of political reality. As far as achieving social reform is concerned, a seat in parliament can be a worthy goal – the election of Julian Assange would be a curious thing – but for those of us who wish to really change things the struggle, as ever, is on the streets.

I am not a Labor Leader; I do not want you to follow me or anyone else; if you are looking for a Moses to lead you out of this capitalist wilderness, you will stay right where you are. I would not lead you into the promised land if I could, because if I led you in, some one else would lead you out. You must use your heads as well as your hands, and get yourself out of your present condition; as it is now the capitalists use your heads and your hands.

I live in Melbourne, Australia. I like anarchy. I don't like nazis. I enjoy eating pizza and drinking beer. I barrack for the greatest football team on Earth: Collingwood Magpies. The 2023 premiership's a cakewalk for the good old Collingwood.
View all posts by @ndy →
This entry was posted in Anarchism, State / Politics, That's Capitalism! and tagged 2013 Australian federal election. Bookmark the permalink.