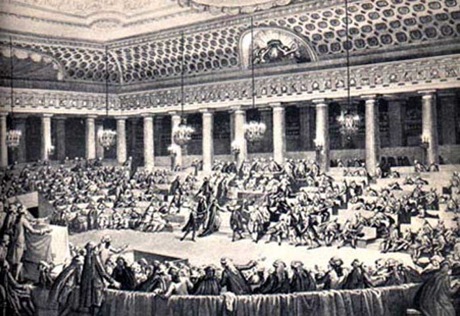 Another year, another election, and once again patriots and upright-citizens-with-lower-cognitive-abilities will be appealed to by the far right, while the far left pitch their message to that dreary tribe of high-minded women and sandal-wearers and bearded fruit-juice drinkers who come flocking towards the smell of ‘progress’ like bluebottles to a dead cat.

For the far right — a mixed bag including Dr James Saleam‘s Australia First Party, a handful of Protectionists, the Freedom-loving, Muslim-hating Nick Folkes, assorted miscellaneous individuals (including some number among the more mainstream Christian parties) and Others — the entry of zillionaire Clive’s ‘Palmer United Party’ and the emergence of the anti-Muslim, anti-multiculturalism Rise Up Australia will sap some energies, as will The Mad Katter in Queensland and Pauline in NSW. And of course, a commitment to Stopping the Boats & Imprisoning their Occupants unites Australia, its voters and its political parties in a way few other issues do (though there are obviously nuances in major and minor party approaches to the question).

But aside, perhaps, from One Nation, which might be more accurately described as right-wing populist, the chief player on the far right is AF. (Late last year Andrew Zammit produced ‘A tentative table on far-right radicalism’ which is especially relevant to this discussion.) AF is standing Alex Norwick in Chifley, Jim Saleam in Cook, John Carbonari in Deakin, Mick Saunders in Lindsay, Tony Pettitt in Macquarie, Michael Chehoff in Newcastle, Terry Cooksley in Port Adelaide, Lorraine Sharp in Riverina and Senate tickets in NSW and Queensland.

Finally, on a related note, the Australian Defence League — now in its third or fourth incarnation on the Internets, the self-appointed leader in this case being some bloke called Ralph Cerminara — appears to be working in close collaboration with the Wilders-inspired micro-Party for Freedom. Both parties are driven by a pathological hatred of Muslims and regularly refer to them as ‘animals’ and ‘scum’.

The Socialist Alliance, Socialist Equality Party and Socialist Party can almost always be relied upon to field candidates, and so too the Communist Party of Australia (although). Fingers xed the Communist League will once again give Ron Poulsen a crack, and who knows, maybe even Trotskyist Platform will throw its hat into the ring. While the SA has yet to announce its full schedule, the SEP has announced it will be fielding “a team of Senate candidates in five states”, though sadly, it seems, none for any Lower House seats. The SP will be hoping Marxist Anthony Main can snatch Melbourne from former Marxist Adam Bandt. In addition, the Progressive Labour Party is contesting a seat in Newcastle.

(Oh and there’s also Pirates and Wikileaks — but that’s another story.)

Thanks to the intelligent use which the German workers made of the universal suffrage introduced in 1866, the astonishing growth of the party is made plain to all the world by incontestable figures …

But, besides, the German workers rendered a second great service to their cause in addition to the first, a service performed by their mere existence as the strongest, most disciplined and most rapidly growing socialist party. They supplied their comrades in all countries with a new weapon, and one of the most potent, when they showed them how to make use of universal suffrage.

There had long been universal suffrage in France, but it had fallen into disrepute through the way it had been abused by the Bonapartist government. After the Commune there was no workers’ party to make use of it. It had also existed in Spain since the republic but in Spain election boycotts had been the rule for all serious opposition parties from time immemorial. The experience of the Swiss with universal suffrage was also anything but encouraging for a workers’ party. The revolutionary workers of the Latin countries had been wont to regard the suffrage as a snare, as an instrument of government trickery. It was different in Germany. The Communist Manifesto had already proclaimed the winning of universal suffrage, of democracy, as one of the first and most important tasks of the militant proletariat …

And if universal suffrage had offered no other advantage than that it allowed us to count our numbers every three years; that by the regularly established, unexpectedly rapid rise in our vote it increased in equal measure the workers’ certainty of victory and the dismay of their opponents, and so became our best means of propaganda; that it accurately informed us of our own strength and that of all opposing parties, and thereby provided us with a measure of proportion second to none for our actions, safeguarding us from untimely timidity as much as from untimely foolhardiness — if this had been the only advantage we gained from the suffrage, it would still have been much more than enough. But it did more than this by far. In election propaganda it provided us with a means, second to none, of getting in touch with the mass of the people where they still stand aloof from us; of forcing all parties to defend their views and actions against our attacks before all the people; and, further, it provided our representatives in the Reichstag with a platform from which they could speak to their opponents in parliament, and to the masses outside, with quite different authority and freedom than in the press or at meetings. Of what avail was their Anti-Socialist Law to the government and the bourgeoisie when election campaigning and socialist speeches in the Reichstag continually broke through it?

With this successful utilisation of universal suffrage, however, an entirely new method of proletarian struggle came into operation, and this method quickly took on a more tangible form. It was found that the state institutions, in which the rule of the bourgeoisie is organised, offer the working class still further levers to fight these very state institutions. The workers took part in elections to particular diets, to municipal councils and to trades courts; they contested with the bourgeoisie every post in the occupation of which a sufficient part of the proletariat had a say. And so it happened that the bourgeoisie and the government came to be much more afraid of the legal than of the illegal action of the workers’ party, of the results of elections than of those of rebellion.

For here, too, the conditions of the struggle had changed fundamentally. Rebellion in the old style, street fighting with barricades, which decided the issue everywhere up to 1848, had become largely outdated …

I live in Melbourne, Australia. I like anarchy. I don't like nazis. I enjoy eating pizza and drinking beer. I barrack for the greatest football team on Earth: Collingwood Magpies. The 2021 premiership's a cakewalk for the good old Collingwood.
View all posts by @ndy →
This entry was posted in Anti-fascism, State / Politics, That's Capitalism!, Trot Guide and tagged 2013 Australian federal election. Bookmark the permalink.