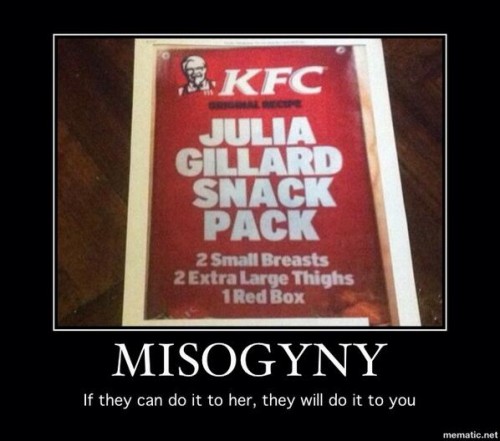 I’ve been mucking about on Twitter today, trying to track down a story about a poster. It seems that once upon a time, a few months ago, a poster appeared in the window of the Preston KFC (128 Bell Street). The poster contains a really awful sexist joke about Julia Gillard, one which may be traced back a few years. The earliest online example I could find of the poster in question appeared in July 2011…

…but the KFC theme has its origins in similar jokes made about Hilary Clinton back in the ’90s (as documented by snopes.com and indirectly referred to in a recent column in The Australian about #menugate). Anyway, to cut a long Twitter story short, the writer Anne Summers assures me that, based on a conversation she had with a journalist who witnessed it, the poster did indeed appear at the KFC in question. The only other detail I think worth adding at this stage is that local (Darebin) Greens councillor/comedian Trent McCarthy apparently contacted the shop and got the following response:

I live in Melbourne, Australia. I like anarchy. I don't like nazis. I enjoy eating pizza and drinking beer. I barrack for the greatest football team on Earth: Collingwood Magpies. The 2023 premiership's a cakewalk for the good old Collingwood.
View all posts by @ndy →
This entry was posted in !nataS, Art, Broken Windows, Media, Sex & Sexuality, State / Politics and tagged Julia Gillard, KFC. Bookmark the permalink.