Or; Fascism &/Or Libertarianism…

On Thursday March 1, local filmmaker and “transcendental fascist” Richard Wolstencroft will be speaking as part of the Melbourne Free University’s program ‘Controversies On Film’:

I’ve blogged about Wolstencroft on a few prior occasions, mostly on account of his fascist politics. The last time I did so at any length was in January of last year. That post — Richard Wolstencroft ~versus~ Richard Wolstencroft — concerned Wolstencroft’s decision to take legal action against blogger Shane Lyons, who had allegedly defamed Wolstencroft by (re-)publishing comments Wolstencroft had made on his Facebook account. I’m unsure precisely what happened with regards these legal proceedings. Suffice it to say that the blogs in question no longer exist. Previously, in late August/early September 2010, Crikey film critic Luke Buckmaster took note of Lyons’ criticisms, and Wolstencroft was provided with an opportunity to defend his record and to slam Lyons’.

Perhaps the most controversial of Wolstencroft’s views are historical. For example, Holocaust denial and Nazi apologetics: 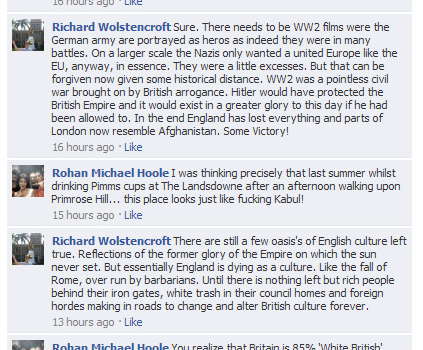 In any event, I was hoping to put some questions to the organisers of the film program @ MFU but alas, what with charting Peter Watson‘s meteoric rise to political stardom and just as sudden crash, I’ve run out of time. It may be that nobody cares, but if you do, feel free to comment, and I’ll respond in more detail when I return from Tel Aviv.

I live in Melbourne, Australia. I like anarchy. I don't like nazis. I enjoy eating pizza and drinking beer. I barrack for the greatest football team on Earth: Collingwood Magpies. The 2021 premiership's a cakewalk for the good old Collingwood.
View all posts by @ndy →
This entry was posted in Anti-fascism, Film, Student movement and tagged Melbourne Free University, Richard Wolstencroft. Bookmark the permalink.