From the Department of Destroy All Yuppies!

Over 70 years ago, a small group of local Aborigines, led by William Cooper, protested the beginnings of the genocidal Nazi assault upon European Jewry.

The final chapter in a 72-year old Australian story of oppression, protest and pride is finally set to be written.

It involves formal recognition of an Aboriginal elder who led a march against Nazi attacks in the 1930s.

“When he arrived at the German consulate in South Melbourne in 1938 he delivered a petition condemning the Nazi’s behaviour.”

It’s widely considered a visionary act. Just a few weeks after Kristallnacht, it is a gesture for which William Cooper is only now being recognised.

But his great-grandson Kevin Russell insists the story still resonates…

In 2007, on the anniversary of Kristallnacht/Pogromnacht in Prague, neo-Nazis attempted to hold a rally in the Jewish quarter. It didn’t quite go according to plan (see also : Dear Mister Ambassador, February 2, 2010).

So much for William Cooper. As for Richard Wolstencroft…

I’ve kind of always distrusted Richard Wolstencroft, filmmaker, Melbourne Underground Film Festival director, and tedious bore, partly because of his avowed fascist tendencies. Now that I’ve paid money for and sat through his fucking film [Pearls Before Swine], I just want to beat the cunt senseless.

The transcendental fascist has been the subject of renewed criticism recently, by way of a blog titled ‘Richard Wolstencroft’s Unconcealedness’. The blog documents a number of the silly things Wolstencroft has been posting on his Facebook account “and elsewhere”. For example:

There needs to be WW2 films were [sic] the German army are portrayed as heros [sic] as indeed they were in many battles. On a larger scale the Nazis only wanted a united Europe like the EU, anyway, in essence. They were a little excesses [sic]. But that can be forgiven now given some historical distance…

Forgiven? Maybe. Maybe not. Many leading Nazis were certainly forgiven their crimes: Hans Eisele, the German doctor and SS officer who worked at Nazi concentration camps at Sachsenhausen, Natzweiler, Dachau and Buchenwald, was merely one of thousands whose punishments were minimal. In any case, any discussion of films in which Nazis are the “heros” would be incomplete without some acknowledgment of Alois Von Eichberg’s 1944 classic Stolz der Nation:

Putting to one side this admittedly minor quibble, while somewhat unusual (most agree that the Nazis, “in essence”, wanted something other than “a united Europe”, and that the Holocaust and other German war crimes were more than a little ‘excessive’), such sentiment is hardly unique to the Z-grade filmmaker. Generally speaking, however, these sorts of opinions are normally confined to kooky sites such as Stormfront; they tend not to emanate from the director of an ‘underground’ film festival, however awful and stupid. That Wolstencroft is still getting away with it suggests that the problem lies elsewhere.

The yuppies who attend Wolstencroft’s annual film festival typically don’t care much for politics, so further confirmation of the nature of his views, if any were truly needed, signifies little. (Wolstencroft has been publicly advocating fascism for some years now.) Further, Wolstencroft has built a career upon catering to the naughty desires of the middle class, whether sexual, cinematic, or both. As Wolstencroft remarks of Master Satirist or Yuppie Clone? Bret Easton Ellis: “For Ellis the superficial is all that matters. There is nothing beyond the surface, no inner depths, no hidden meanings. If you think about it this idea is paradoxically rather deep.”

So much for the market. As for the rest, the major sponsor of the 2010 MUFF was Japanese corporation Canon.

Canon’s corporate philosophy is founded on a responsible approach to working. We believe that each step we take in trying to work for the common good – as individuals and as an organisation – does make a real difference.

We aim to act morally, in accordance with our own code of conduct and our worldwide ethical compliance framework; but more than this, we aim to make a positive difference to all we come into contact with and, through our behaviour, contribute to positive change.

I’m unsure if Canon agree with Wolstencroft that MUFF is “aggressive, transgressive, cutting edge, hip oh and fucking out there, baby” but, presumably, their “worldwide ethical compliance framework” would make it difficult to reconcile apologias for Nazism with ‘positive change’. As for the other, minor, MUFF sponsors, they are the crazy funky zany madcap and in no way annoying bunch at noise merchants gasinc; the “cutting-edge music distributor sourcing international product” aka Inertia; the “daily email News and Jobs service for people working in the Australian film and television industries” (Screen Hub); Grolsch beer (a Dutch brand owned by SABMiller); and some mob called Movie Extra. Helping Wolstencroft deal with The Controlled Media are 3RRR and Spook zine. Curiously, Spook‘s ‘Film Editor’ Luke Buckmaster also writes for Crikey on the subject of film — and MUFF, but Spook‘s promotion of MUFF goes unmentioned.

As for Wolstencroft’s hosts, in agreeing to screen films just around the corner from the Jewish Holocaust Museum and Research Centre, the owners of the Elsternwick Cinema have demonstrated that they have a rather odd sense of humour. Well, perhaps: much more likely, the proximity of the two is an unhappy coincidence, and the franchise holders are completely unaware of Wolstencroft’s espousal of fascism. In reality, it’s unlikely that either Reading Cinemas (a US-based cinema exhibition and real estate company) or the managers of the Elsternwick Cinema know much about Wolstencroft’s political views, and even if they did, in these crazy, topsy-turvy times, who’s to say what’s right or wrong? 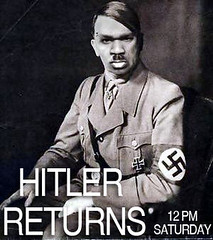 I live in Melbourne, Australia. I like anarchy. I don't like nazis. I enjoy eating pizza and drinking beer. I barrack for the greatest football team on Earth: Collingwood Magpies. The 2021 premiership's a cakewalk for the good old Collingwood.
View all posts by @ndy →
This entry was posted in Anti-fascism, Broken Windows, Death, Film, History, State / Politics and tagged MUFF, Richard Wolstencroft. Bookmark the permalink.