Apologies for the interruption to service. For reasons beyond my control, the blog appears to have been down from Tuesday (16) through to Sunday (21). Thanks to those responsible for getting it back up. 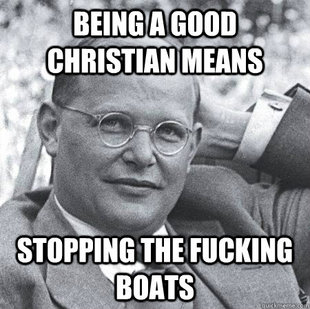 PM KRudd has proven to be rather more devoted to !nataS than to G*d if his praise for Dietrich Boenhoffer is any guide. In October 2006 the Good Christian wrote (Faith in Politics, The Monthly, October 2006):

Bonhoeffer is, without doubt, the man I admire most in the history of the twentieth century. He was a man of faith. He was a man of reason. He was a man of letters who was as well read in history and literature as he was in the intensely academic Lutheran theology of the German university tradition. He was never a nationalist, always an internationalist. And above all, he was a man of action who wrote prophetically in 1937 that “when Christ calls a man, he bids him come and die.” For Bonhoeffer, whatever the personal cost, there was no moral alternative other than to fight the Nazi state with whatever weapons were at his disposal…

Another great challenge of our age is asylum seekers. The biblical injunction to care for the stranger in our midst is clear. The parable of the Good Samaritan is but one of many which deal with the matter of how we should respond to a vulnerable stranger in our midst. That is why the government’s proposal to excise the Australian mainland from the entire Australian migration zone and to rely almost exclusively on the so-called Pacific Solution should be the cause of great ethical concern to all the Christian churches. We should never forget that the reason we have a UN convention on the protection of refugees is in large part because of the horror of the Holocaust, when the West (including Australia) turned its back on the Jewish people of Germany and the other occupied countries of Europe who sought asylum during the ’30s.

Sadly, KRudd has chosen to pay tribute to this most admirable German by declaring that no person seeking asylum in Australia and having arrived by boat will be granted it. They will instead be dumped in the neo-colony of Papua New Guinea. I joined maybe 500-1000 others for a stroll around a very wet and cold Melbourne on Saturday in protest at the announcement; there’ll be another rally this coming Saturday (July 27) at 1pm at the State Library, and others around the country.

Yeah yeah I know I know.

NB. While the state is happy to keep boats full of foreigners at bay, it’s also very determined to allow a foreign corporation named McDonald’s to colonise the Dandenongs, and so too it seems are the courts.

I live in Melbourne, Australia. I like anarchy. I don't like nazis. I enjoy eating pizza and drinking beer. I barrack for the greatest football team on Earth: Collingwood Magpies. The 2020 premiership's a cakewalk for the good old Collingwood.
View all posts by @ndy →
This entry was posted in !nataS, State / Politics and tagged "Torpedo the boats!", “...And That’s Why We Should Keep The Bloody Flag The Same!”, boundless plains to share, KRudd. Bookmark the permalink.